What Are President Obama's Actual Objectives? 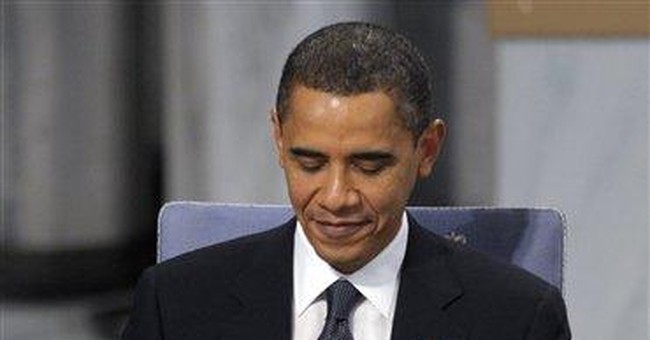 After he took office, he claimed that he had “inherited” the worst economic situation in his country’s recent history. And then, the new President sought to consolidate his power. Once privately-owned enterprises became government-owned and operated entities, and were “restructured” so as to become, essentially, “workers’ cooperatives.”

Not surprisingly, unemployment remained persistently high, even as the new was implementing his much-celebrated “reform” measures. And while private citizens had to struggle with the worsening economic conditions, government officials nonetheless continued to exert increasing levels of control over the nation’s wealth, and also continued to enrich themselves from that wealth, despite the suffering of “the governed.”

Does this seem like a description of the first 11 months of the Obama Presidency? What I’ve described here thus far portrays the conduct of President Obama and members of his Administration fairly succinctly.

Yet, this is actually a description of the ascendency of Hugo Chavez, the once freely elected President and now rapidly-morphing-into-a-dictator of Venezuela. In fact, you could call this a “textbook case” - this is my paraphrase of a description of Chavez that appears in “International Business: Competing In The Global Marketplace,” a text book currently used among M.B.A. students at many of America’s top graduate business schools.

And isn’t it interesting to note the parallels between Hugo Chavez and Barack Obama? The story of Chavez’ early days in office deviates from Obama’s story at the point where Chavez was able to arbitrarily change the make-up of Venezuela’s “supreme court,” and thus re-write the nation’s constitution so as to legally enhance his own power and control (Obama has expressed disapproval of the U.S. Constitution, but has not yet attempted to re-write it).

But on economic policy matters – or perhaps we could say “on general economic tendencies” – Obama and Chavez have much in common. The President “consolidated his power” as he “inherited” the worst economic situation in his country’s recent history? That sounds like the rhetoric of Obama’s brief few weeks as “President-elect,” his first six months in office, and the establishment of his many “czars.” Once privately-owned enterprises became government-owned and operated entities, and were “restructured” so as to become, essentially, “workers’ cooperatives?” General Motors and Chrysler should come to mind on this one.

And just as it is in Venezuela, so also it is in the United States - our economy is still not growing. We may be seeing early signs of growth now (we’ll know in the coming months), and I’m not offering a forecast here. My point is simply that after 11 months of the Obama Administration’s corporate bailouts (a perverse process that President Bush began last year, and that President Obama has accelerated), a forced bankruptcy of one of America’s largest corporations, and the Administration’s continuous belittling and demeaning of corporate executives, the U.S. Chamber of Commerce, and even, at times, the medical profession, neither economic activity nor employment have grown, yet President Obama nonetheless has a lot more control over our economy, and over individual people. As Senator John Thune (R-South Dakota) observed in the Wall Street Journal back in October, “President Obama has become the de facto CEO of large chunks of our economy, with the power to hire and fire executives, dictate salaries, declare what products should be made, and decide winners and losers in the marketplace…”

Along with additional control of economic resources, an augmented constitution, and a military that frequently turns itself against the citizenry, the “Chavez Administration” has also pursued an aggressive path of control over Venezuela’s media. This has meant implementing so-called “Media Contents” laws, that define what media content is appropriate and inappropriate for children. For example, allowing TV stations to show video of military troops shooting at citizens would be too violent for children’s eyes, so that kind of content is prohibited. And this year, alone, Chavez has closed down radio stations and seized TV stations that dared to broadcast content that expressed disagreement with him.

While violence has not yet erupted in the pursuit of “Obama’s America,” our President’s Czar of “information and regulatory affairs,” Cass Sunstein, has nonetheless proposed a so-called “notice and take down” law. Under this provision, those who operate websites - - The Washington Post, radio stations, private bloggers, and perhaps even you, yourself -we would all be required “take down falsehoods upon notice” from the U.S. government. And who would determine what is “true” and “false?” The Obama Administration, of course.

Thus far, “control” has been the predominant objective of the Obama presidency. It is difficult to argue that this pursuit has produced good things for the American people, yet the pursuit continues, just as it has in Venezuela and elsewhere around the world.

Will Americans allow this raw pursuit to continue?