Obamanomics Isn't Producing Jobs! Gosh, How Can This Be? 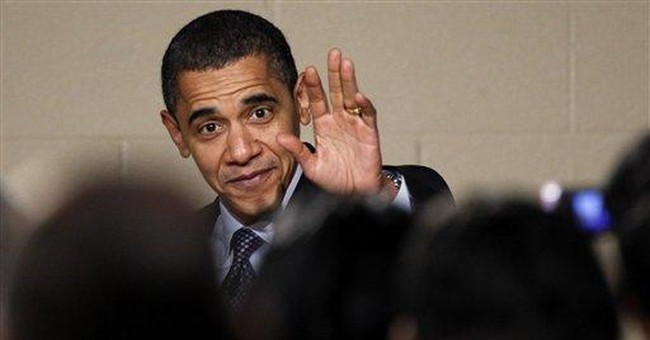 “As Obama holds jobs summit, frustrated left complains about slow growth.” This headline appeared at Foxnews.com last Thursday, and it was at least the fourth time in a week that I had noticed America’s left-wing expressing concern over the Obama economy.

The weeklong liberal’s lament seems to have started last Sunday with Arianna Huffington. While noting Obama’s televised address about Afghanistan, the liberal pundit stated that instead, the President should be addressing the nation about a “jobs bill.” And with this, the unhinged Huffington then cried out “Can someone in the White House Priorities Department please hit reboot?”

Well, a “jobs bill” has already been thrust upon us. It was loosely referred to as an “economic stimulus” bill, it had a staggering price tag of a reported $787 billion, it became law in February, it was lauded as a “major legislative victory” for President Obama.

And less than three weeks ago the Obama Administration was still crowing about the numbers of jobs that had either been “created or saved” by that very stimulus bill.

But things seem different now. To put it in contemporary liberal media terms, “the narrative about Obama” has begun to change. And it seems that even the most ardent of Obama fans – that is, the American left wing -is waking up and realizing that the Nobel Peace Prize-winning man who some regard as quasi-deity, may nonetheless not know what he’s doing with economic policy.

I’m not saying “I told you so” about Obamanomics. I could not have predicted months ago how good or bad the economy would be right now, and those who claim to predict such things often overlook an essential reality : economic activity is, by its nature, unpredictable, and risky.

But I have noted over the last couple of years Barack Obama’s approach to economic policy, which is, to say the least, “heavy-handed,” and I have also noted his apparent disdain for private sector enterprise. And I did state earlier this year that what was shaping-up to be the President’s economic platform was not something conducive to economic growth and job creation.

And now, to paraphrase the President’s former Pastor Jeremiah Wright, Barack Obama’s “chickens” appear to be coming home “to roost.”

If that sounds harsh, consider the economics of Barack Obama over the past couple of years. Among others, he campaigned on themes of: A) raising taxes on oil companies to get even with them for their so-called “windfall profits;” B) “reigning-in” executive salaries; C) raising the capital gains tax rate; D) “cracking-down” (whatever that means) on both the insurance, and pharmaceutical industries; E) raising income tax rates on high-income earners (the definition of “high-income earner” has been raised and lowered repeatedly in the past 24 months); and E) that elusive promise of making both healthcare, and a college education, “universal.”

Since becoming our President, Barack Obama has, in no particular order: A) alleged that Medical Doctors sometimes perform unnecessary procedures merely for the sake of enhancing their salaries; B) sought greater ability for his Administration to seize private banks; C) engaged in a public campaign of maligning the U.S. Chamber of Commerce ; D) forced the Chrysler corporation into a bankruptcy (if G.M. fell into bankruptcy, Chrysler got “pushed”) that defied both bankruptcy law and accounting rules, by requiring some of Chrysler’s creditors to accept payments of less than 30 cents on the dollar (by law those creditors were entitled to 100% payment of the debt); and E)ordered his “Executive Compensation Czar” to mandate anywhere from 50 to 90% salary cuts for executives of bailout-receiving companies.

Some Americans may look at this list (which is not, by any means, conclusive) and determine that the President’s approach to economics is, at worst, benign, and at best, helpful. But this is, again, to ignore yet another essential truth about economics: in order for economic growth to take place, participants in the economy must be willing to take risks, and to invest, with the prospect of earning a “return” on their investment if their enterprise is successful.

And the President has dis-incentivized this necessary risk-taking. Roughly 11 months into his Presidency, Obama has consistently threatened and impugned successful individuals and enterprises, and Americans who have dared to disagree with him. And despite what Obama’s Manufacturing Czar Ron Bloom (and communist dictator Mao Tse-Tung) say about how “justice comes from the barrel of a gun,” American economic growth most certainly does not. When government’s “guns” get drawn, investors, entrepreneurs and businesses run and hide – that is, they seek to minimize their risks by not investing, not hiring, not creating new things, and thus - they don’t produce “economic growth.”

After last week’s White House “jobs summit,” the President claimed that he is "open to every demonstrably good idea” that might create jobs, yet noted that “we also though have to face the fact that our resources are limited."

Barack Obama may be surprised by what a tremendous “resource” the American people can be - if he could only get out of our way.