"Tolerance" and the "Other" American Muslim Tragedy 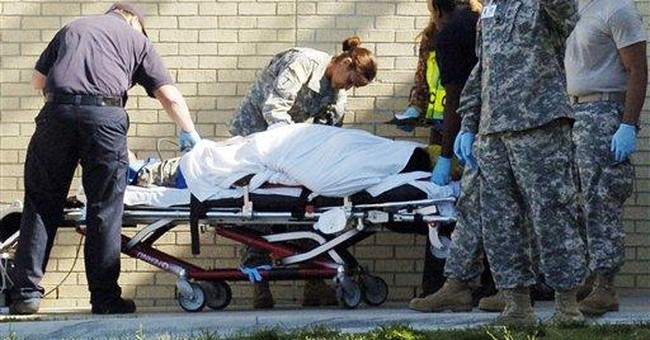 “... America and Islam are not exclusive and need not be in competition. Instead, they overlap, and share common principles -- principles of justice and progress; tolerance, and the dignity of all human beings...”

Those remarks were uttered by President Barack Obama on June 4th of this year. And I wish I could believe that they were accurate.

Obama was, of course, speaking at Cairo University, and making good on his campaign promise of “delivering a speech from the capitol of a Muslim nation.”

Yet, despite the immense power of Obama’s oratory skills (and his incredible confidence in his skills), he nonetheless appears to be merely human, and does not seem to possess the supernatural ability to “speak things into existence.”

Thus, Obama simply declaring that America and Islam “overlap,” and that Muslims and Americans share “common principles of justice and progress,” does not guarantee that this “sharing” and “overlapping” actually occur.

By now, the horrific profile of Army Major Maj. Nidal Malik Hasan is widely known. And despite President Obama insisting that we must not “jump to conclusions” about this American Muslim man, the picture is still horrifying: an American soldier who openly disagreed with the policies of two American Presidents (the “Hawk” George W. Bush and the “Dove” Barack Obama), who complained about deployments, and made “outlandish statements” against his nation and its government, was nonetheless allowed to rise through the ranks of the U.S. Army.

The obvious question – the “elephant in the living room,” to use a term from the world of family psychology – is “why was this kind of behavior tolerated and apparently overlooked?” And the only obvious answer, at least at this point, is simply “because he is a Muslim.”

Our government and our President will make their “conclusions” when they make them. The rest of us who are private citizens and who want our unique American style of human freedom to continue, must begin communicating clearly, and honestly, about the Islamic problem in our midst. And that means getting beyond the “kid glove” approach we typically utilize in speaking about minority groups, and being willing to speak the truth about Muslims – even if that results in “hurt feelings” for some, or cries of "intolerance" from others.

The unwillingness (or perhaps it’s a matter of inability) to speak the truth on these matters is often painfully apparent in both local and national media. Several days before Major Hasan became a mass murderer, a series of misconstrued, soft-pedaled press conferences and news reports unfolded in Phoenix, Arizona about a man who murdered his own daughter by running over her with his Jeep suv.

Faleh Hassan Almaleki, an immigrant from Iraq living in the Phoenix suburb of Peoria, had become angry about his 20 year old daughter Noor Almaleki. Noor had set-up accounts for herself on Myspace.com and Facebook.com, had posted “alluring” photos of herself on a webpage for aspiring actresses and models, and was living with her boyfriend and her boyfriend’s mom. This all meant that Noor had become “too westernized” for the tastes of her Muslim father, so Faleh Hassan Almaleki ran over his daughter (along with the boyfriend’s mom) as a means of committing an “honor killing.”

Before dying, Noor was hospitalized and remained in a coma for several days. And just like the Muslim men we have seen on video recordings who hide their identities with masks when beheading “infidels,” Faleh Hassan Almaleki sought to “hide” by fleeing the country after he ran over his daughter.

Immediately after the incident, the Peoria police department briefed the local media. And in what seemed to be an overarching attempt to avoid saying anything that may have cast the Muslim father in a bad light, it was explained that the motive for the crime appeared to have centered on the fact that the daughter was living in such a way that she was inconsistent with “her family’s values.” Shortly thereafter, the statewide Arizona Republic newspaper published a report entitled “Lifestyle May Have Put Woman In Hospital.”

A 20 year-old woman in Arizona who was in pursuit of a job, a college degree, and a husband of her own choosing was murdered by her own dad. Yet, law enforcement and media professionals, perhaps in an attempt to express “tolerance” or to show respect for the “diversity” of Islam, were suggesting that Noor’s choices and “lifestyle” were to blame for her death.

Generally speaking, American non-Muslim fathers don’t run over their children with their cars and call it “honorable.” And American non-Muslim military personnel don’t intentionally kill their fellow soldiers. There is a pattern of very dangerous, deadly behavior with Muslims in America and around the world.

Americans must awaken to this reality, whether or not our President does.