Ethical Dilemmas Amid The President's Charm 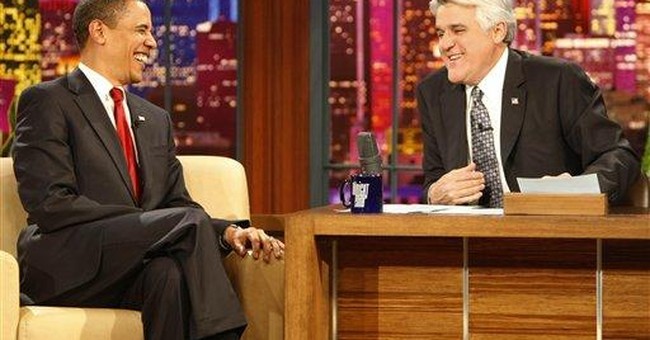 “…There's a moral and an ethical aspect to this, as well…I think the most important thing that we can do is make sure that we put in a bunch of financial regulatory mechanisms to prevent companies like an AIG holding the rest of us hostage. Because that's –- that's the real problem….”

It is noteworthy that President Obama chose to speak of “moral and ethical concerns” during his appearance on the “Tonight Show” last week.

The President is correct. The relationship between the AIG Corporation and the United States Federal Government is fraught with serious ethical and moral dilemmas. Yet, despite the President’s expressed “concerns,” he is mostly avoiding the many actual dilemmas entailed in this mess, while at the same time creating more ethical dilemmas for the United States with his own behavior.

Every tax-paying U.S. citizen became directly entangled in the AIG Corporation during the Fall of 2008, before Obama was President. At that time, the AIG Corporation had managed itself into disaster and came looking to the government for “help,” and in response, the previous Congress and President Bush infused the private corporation with public money.

But that was last September. Since then there have been three additional infusions of our money into the AIG Corporation, the most recent one happening last month at the hand of President Obama. And here lies a moral dilemma that is being ignored: President Obama willingly accepted donations from AIG to his presidential campaign last year, and now this year he has handed-over billions of our tax dollars to the company.

Was it a “quid pro quo,” “return the favor” move from Obama? The situation certainly entails a conflict of interests. Given this, and given his recent desire to play the “give the money back” game, President Obama needs to start by giving back to AIG the money they gave him for his campaign. Sadly, there is no evidence that President Obama has any intention or desire to resolve this ethical dilemma.

Our government is also morally culpable for the “terms” of the AIG bailout. Ever since the bonus payouts to AIG employees became a “controversy” in the media, President Obama has insisted that he knew “nothing,” prior to authorizing the bailout funds, about AIG’s contractual obligations to pay bonuses to their executives, and has expressed indignation over the matter.

Yet last Wednesday, Senator Christopher Dodd stated on CNN that indeed, he and “the administration” knew very well that AIG had obligations to pay bonuses to their executives, that he (Dodd) attempted to legislatively prevent those bonuses from being paid, and that “the administration” pressured him to not prevent the bonus payments.

So Senator Dodd and President Obama are saying different things about our government’s relationship to AIG. Both stories may be false, but they cannot both be true at the same time. If one of these men is speaking truthfully, then the other is lying.

Worse yet has been the public response from President Obama and members of Congress to taxpayer outrage. In a spectacular game of “CYA,” President Obama, Speaker of the House Nancy Pelosi, Congressman Barney Frank, Senator Christopher Dodd, and Republican Senator Chuck Grassley (just to name a few) have all sought to deflect criticism of themselves for spending billions of our dollars on a failing corporation, by making 73 AIG executives the object of public scorn.

Nothing is known publicly about the bonus recipients themselves. Yet it is probable that, despite the overall failure of the AIG "team," the anonymous 73 had to achieve some significant individual goals to qualify for a bonus. OJ Simpson was once a record-setting, history making, hall-of-famer, “bonus worthy” running back, yet nearly his entire NFL career was spent with a “failed” team called the Buffalo Bills. The situation with the AIG executives is likely similar.

But details don’t matter for power-hungry politicians. To divert negative attention from themselves, President Obama and members of Congress have begun a process of “occupational profiling.” The idea of singling-out Americans according to their ethnicity for special government harassment and punishment - - “racial profiling” - - is abhorrent. But the leaders of our government have singled-out anyone with the word “executive” in their job title, for very ugly treatment.

President Obama is correct to say that there are “moral and ethical” issues entailed in this mess. Americans need to focus on what those issues truly are.