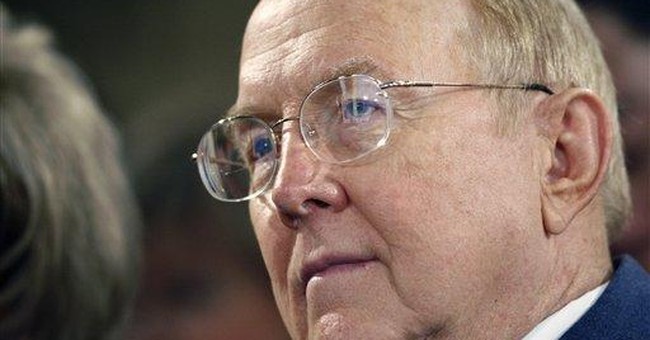 “..One of the common errors of founder-presidents is to hold to the reins of leadership too long…”

With these words, conservative activist and Clinical Psychologist Dr. James Dobson recently announced his resignation as Chairman for the non-profit Focus On The Family organization. This decision reflects Dr. Dobson’s extraordinary character, and should not be taken lightly, because it is rare when a personality of his magnitude can make such a difficult choice.

As Focus On The Family now contemplates its future, the entire social conservative political movement needs to do the same. And the movement should begin by asking itself this question: “what is our purpose - - to preserve our existing institutions, or to do what it takes to advance vital ideas in the future?” These two objectives are not incongruous, but neither are they the same thing.

The last Republican primary election cycle vividly illustrates this. During that time, Dobson devoted most of his public political commentary to critiquing the candidates, and, while from a distance it appeared that he thought highly of Governor Mitt Romney, he nonetheless declined to offer a public endorsement. Finally, on primary election day in his home state of Colorado, Dobson cautiously admitted in an interview that he voted for Romney, but made it clear that his vote was not to be construed as support for the Mormon Church, to which Romney belongs.

It's possible that Dobson refused to endorse Romney because, had he done so, it would have appeared in the minds of many Evangelicals as an endorsement of a “cult member” - - and this potentially could have been harmful to Focus On The Family. If this is correct, then it appears that, perhaps out of necessity, Dobson chose to protect his organization, rather than publicly support his preferred presidential candidate. And thus, my question, what is the purpose of this movement - - to preserve its’ existing institutions, or to do what is necessary for the future?

This scenario also begs another question: when considering a statesman, why is it that some (perhaps many) social conservatives would place theology and religious affiliation above all other considerations? The social conservative movement was begun largely by Evangelicals, yet today America is far more religiously pluralistic, and less exclusively Evangelical, than it was even a decade ago.

If the movement is to survive, socially conservative Americans must be willing to form alliances with people who are like-minded on public policy matters, but who also may at times differ on theological matters. This already happens “behind the scenes.” But, unpopular as it may be to some, leaders of the movement need to articulate these kinds of alliances publicly, and to “normalize” such relationships. If this doesn’t happen, we could see the otherwise qualified Romney get snubbed again, simply because he belongs to the “wrong church,“ or, God forbid, Governor Bobby Jindal get rejected because prior to becoming a Christian, he was once a Hindu (and some may find this background distasteful).

The social conservative movement must also ask itself if it is willing to embrace the principles of smaller, limited government. This is essential, because during the Bush presidency social conservatives became quite comfortable with certain types of big government. For example, taxpayer dollars spent on “social welfare” programs were fine, so long as they were “marriage enrichment programs“ or “abstinence only” sex education programs.

But a government entrusted to “teach abstinence” easily becomes the government that teaches “sexual experimentation” and distributes condoms, and the agenda changes according to which political sensibilities are prevailing in Washington at any given moment. Thus, government is an inherently unreliable partner for advancing social conservative causes, and the solution to the dilemma is to have less government permeating our lives - - not more.

The movement must also contemplate what, precisely, are the great “moral issues” of our time. For over three decades, social conservatives have done tremendous work speaking to America’s collective conscience about the sanctity of the human person, and the virtues entailed in the institutions of marriage and family. As a result, millions of Americans - - loosely described as “values voters” - - understand the “moral issues” of marriage and abortion, and vote on these issues accordingly.

But an exclusive focus on marriage and abortion is insufficient. Today we have a President whose “economic plan“ completely undermines the moral virtues of thrift, hard work, personal responsibility, and personal charity. His “green energy” environmental plans elevate the interests of plant and animal life over and above the interests of human life. And his plans to nationalize healthcare, which inevitably leads to healthcare rationing, threatens to undermine the sanctity of the elderly, disabled, and terminally ill.

Now, perhaps more than ever, America needs the social conservative movement to address these issues. They are biomedical, environmental, and economic issues, yes. But they are most certainly “moral issues.”

Which of the movement’s leaders are up to the task?