Can A Guy Hit A Girl? Can Republicans Seize The Moment? 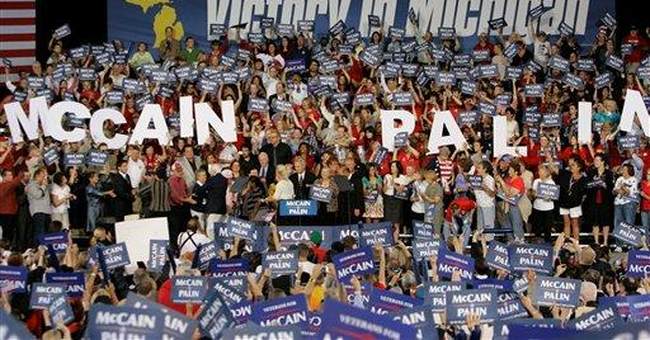 Is it ever okay for a guy to hit back at a girl, even if she hits him first?

In the days that have followed the Republican National Convention, it seems that Barack Obama and Joe Biden still haven’t answered that question.

During her big national debut during last Wednesday’s primetime convention segment, Vice Presidential nominee Governor Sarah Palin introduced herself to America with sharp, direct attacks on Obama. While belittling everything from his professional background as a “community organizer,” to his “no drill” strategy on American oil, Governor Palin fearlessly faced the fallacies of Obama’s policies, and made it clear that it’s because of her “experience” that she knows better.

At the end of the evening, Obama was the boy on the playground who got smacked hard by a girl. And in response, Obama and Biden have had little to say about Palin, trying instead to keep the focus on McCain.

Now it appears that, going forward into the new week, the Obama-Biden campaign will dispatch Sen. Hillary Rodham Clinton of New York, Arizona Gov. Janet Napolitano and Kansas Gov. Kathleen Sebelius (three ladies who all got snubbed for V.P. in their Democratic Party) to assure female audiences that Palin is “too much like” President Bush. Meanwhile, Obama and Biden will do their best to ignore the Republican Vice Presidential nominee.

It’s difficult to imagine how the Democratic Party can respond to a Republican female on the attack. Can Obama or Biden criticize Governor Palin at all, without appearing in the minds of many like sexist male pigs? They both are keenly aware of how women voters rallied around Hillary Clinton earlier this year when she was perceived to be a victim of sexism. Now, the Obama-Biden gang simply can’t afford to risk producing that kind of perception about their stance towards Palin.

But while Democarts contemplate whether or not a guy can hit a girl, Republicans should consider this: how much longer can the Democratic Party purport to have the corner on the female voter market, while ignoring, and even despising women who are just like Palin?

Despite America’s cultural and political left being caught off-guard by her, “Sarah Barracuda” is nonetheless an archetype for how millions of American women live their lives and view the world around them.

Palin represents the reality that today, a woman in America can break the “glass ceiling” and be in charge, while still appreciating and even enjoying the otherwise traditional and “antiquated” things of life - - things like male-female relations, marriage and motherhood.

Palin is the woman who has succeeded in business, and in public office, without succumbing to Hillary Clinton‘s Marxian, redistributionist economic instincts. She is the independent woman who has faced adversity without claiming the status of “victim,” isn’t looking for the government’s “help” in all things, and doesn’t assume victim hood for others, either.

Palin is the “soccer mom” (or, in her case, the “hockey mom”) who is not easily swayed by political ads and clever campaigns, but rather, is resolute in her political views and values.

In short, Palin demonstrates that, today, a woman in America can be all that she wants to be, without being a political or social liberal. She has achieved the expressed goals of “feminism” — independence, stature, equality, influence — without, apparently, hating men and swearing-off motherhood.

As if that isn’t sufficiently confusing, the Palin attributes are all wrapped-up in an attractive package. Palin bluntly defies the stereotype of the “frumpy,” religiously conservative, right-winger mom who gives no care or concern to her physical appearance. She is articulate, poised — and “hot,” in a modest sort of way. She has the “look” that fits on the cover of a grocery store tabloid or glamour magazine, yet she’s an anathema to the worldview represented within its pages.

While Barack contemplates how to “hit back,” the Republican Party needs to seize the day. McCain’s V.P. pick has exposed the Democratic Party’s narrow, exclusionary view of American womanhood. Can the G.O.P. use this moment to its own advantage?