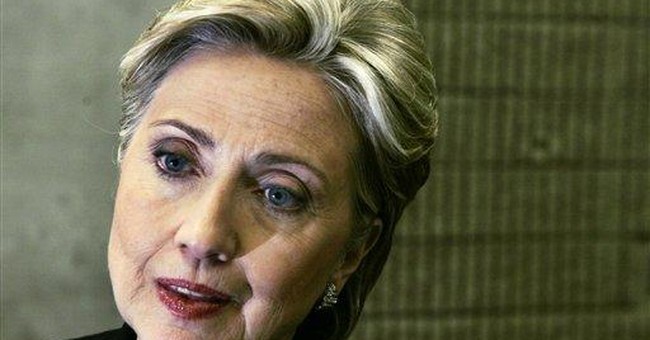 That was a direct quote taken from an official statement issued by the New York state chapter of the National Organization for Women, after Ted Kennedy’s grand endorsement of the Barack Obama presidential candidacy last week. The news of this Kennedy rebuke was widely reported, but, because of some confusing headlines, some were left with the impression that N.O.W.’s national leadership issued the reprimand.

This prompted N.O.W. President Kim Gandy to issue her own statement, assuring the world that N.O.W. has “enormous respect and admiration” for Kennedy, and respects his right to endorse Obama if he so chooses.

So N.O.W. and Ted Kennedy are still “like this,” despite the fact that he endorsed the liberal guy running for President, instead of the liberal woman. I’m sure we all feel better now.

But what does it mean, to say that Kennedy’s choice has “really hit women hard?” Is a choice to not support Mrs. Clinton’s political ambitions - - whatever those ambitions may be at any given time - - necessarily a choice that hurts all women?

Whoever it was at N.O.W.’s Albany office that wrote the rambling, emotive attack of Kennedy, actually went so far as to suggest that the Obama endorsement is symptomatic of a broader, ongoing disrespect for women’s rights.

So Hillary has a “right” to be President? Huh???

This nonsense from a N.O.W. state chapter may be fairly isolated, but the fact that it happened is symptomatic in itself. It indicates that some people have, to put it in psycho-therapeutic terms, an “unhealthy attachment” with a public figure that is highly adept at projecting her “false self.”

For most of my lifetime, the stated ideals of America’s feminists have had to do with women being their true, authentic selves; ascending to positions of leadership and influence; all without obstruction from, or reliance upon, men (husbands in particular). Some may imagine Hillary Rodham Clinton to be a living symbol of these ideals, and it may be that she thinks of herself in this way.

But is this really true, given the way she’s conducted her professional life? It’s difficult to answer "yes" to this question, knowing her history of enabling Bill’s abusive and deceitful behavior, and her willingness to allow other women in the White House to “take the fall” at times when former President Bill misbehaved and needed a scapegoat.

But forget Mrs. Clinton’s numerous years of “experience” in the White House. Let’s instead consider just the last 12 months or so, as she has been pursuing a return trip back to Pennsylvania Avenue.

At the start of 2007, Mrs. Clinton presented herself as very independent from Bill; they lived apart much of the time, and rarely appeared together publicly. By spring time, she had begun announcing that, when she becomes President, she’ll appoint Bill to be “ambassador to the world,” while Bill began speaking publicly about making himself “available” to help Hillary’s administration in any way that he could.

Through the summer Hillary and Bill campaigned both together, and separately, while in the fall months, “Operation Clinton” became more about Bill and all that he was planning to accomplish once they were both restored to their rightful place in the world - - the White House.

Thus far, 2008 has provided nothing short of a Clinton psychodrama. In the month of January alone, Bill admitted that there’s only “so much” he can do to get his spouse elected, and that he can’t make her “taller, younger, or male;” Bill insultingly described Obama’s stance on the Iraq war as a “fairytale;” Bill accused the media of being “stenographers” for the Obama campaign; Bill claimed that electing Obama to be President would be tantamount to "rolling the dice;" Bill compared Obama to the racially polarizing Jesse Jackson; we saw Bill explode into red-faced, Elton John-style tantrums with television news reporters; and after all this (and with Obama's polling numbers rising), Hillary explained that Bill just got a little “carried away” simply because he “loves her” so much, and assured voters that she’ll be able to “control him” when they return to the White House.

Do these details fit in the story of a feminist icon? If Hillary is a victim of a misbehaving spouse, then why is this so? A truly “powerful woman” wouldn’t remain in these abusive circumstances, and continue to be victimized- - would she?

If Hillary has not been victimized by Bill, then she would seem to be complicit with Bill’s insanity, willingly allowing him to play “bad cop” and do her dirty work. Such a relational arrangement may be symbiotic for the Clintons, but it’s difficult to think of Hillary as being “strong” or “independent” in this scenario.

Perhaps Senator Kennedy learned the truth of the Clintons years ago. One can only hope that a majority of Americans are now beginning to catching-on.