Austin Bay
|
Posted: Dec 02, 2020 12:01 AM
Share   Tweet
The opinions expressed by columnists are their own and do not necessarily represent the views of Townhall.com. 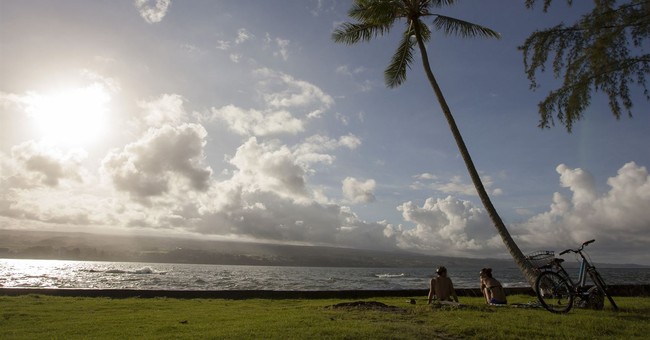 Hawaii can rest a bit easier this Christmas, thanks to another successful Missile Defense Agency anti-ballistic missile test. On Nov. 16, an SM-3 Block IIA (SM3) missile fired by a U.S. Navy guided-missile destroyer, the USS John Finn, destroyed an "ICBM-representative target" as it plunged toward Hawaii. The SM3 is a kinetic interceptor, hit to kill. Its November kill was exo-atmospheric -- in near space.

The target missile had physical characteristics similar to North Korea's advanced ICBMs (intercontinental ballistic missiles). Launched from a site in the western Pacific, its flight trajectory mimicked a Nork shot at the Hawaiian Islands.

Perhaps dismissive sophisticates have also forgotten the Dec. 7, 1941, attack on Pearl Harbor. The Pacific Ocean basin's geography today is the same as it was in 1941, and even in this age of ICBMs and cyber war, a naval base in Pearl Harbor remains key to controlling the central Pacific and projecting power into the western Pacific. That includes projecting power into China's coastal provinces.

Hawaii matters to American defense. So does Guam. So does Alaska, which is also within range of North Korean missiles. Canada and Mexico also matter.

The SM3 is small enough for the Navy's Aegis-type destroyers and cruisers to carry and launch. However, the anti-ballistic missiles require more advanced equipment than the standard Aegis ship. That's why the Navy designates the ABM vessels as ballistic missile defense (BMD) warships.

NATO deploys the SM3 in two on-land Aegis Ashore sites, one in Romania and one in Poland. Why? The answer: Iran.

The target ICBM the SM3 destroyed was the same type hit by the far larger Ground-based Midcourse Defense (GMD) interceptors in tests conducted in May 2017 and March 2019. Until the SM3's success, the GMD and Israel's Arrow-3 were the world's only operational missile-defense systems capable of intercepting ICBMs.

This is more than good news for Hawaii. GMDs are launched from fixed silos. At the moment, only 44 of the big interceptors are deployed, so they are a thin shield. The SM3 is sea-based, which means it is something the GMD is not: mobile. Deploying BMD warships near the North American coast thickens continental defenses against a rogue nation's limited ICBM attack. The SM3 can also intercept an accidental launch.

In a developing crisis, deploying U.S. and allied BMD warships to protect a vulnerable country is a diplomatic counter to an aggressor threatening missile strikes.

Note that the SM3 has limitations. For an SM3 to get an exoatmospheric kill, the BMD warship or Aegis Ashore site must be positioned to intercept the missile warhead in the descent phase.

But don't underrate missile defense, and definitely do not let the missile-defense deniers impose restraints on the development of anti-missile technologies. That happened during the Clinton administration.

In 2003, then-House Minority Leader Nancy Pelosi opined: "The United States does not need a multibillion-dollar national missile defense against the possibility of a nuclear-armed ICBM. What we need is a strong nonproliferation policy with other nations to combat the most serious threat to our national security."

North Korea got the bomb; Iran still seeks one. The best nonproliferation policy has a strong diplomatic component, but it also includes capable missile defenses and a covert strike capability.

Joe Bye-Done: WaPo's Article About Biden's Struggles Sure Does Drive a Dagger Into His Presidency
Townhall
Atlantic writer blames conservatives for *literally* bringing the US 'ritual human sacrifice on a mass scale'
Twitchy
Does Justice Sotomayor's Intemperate Rant at Her Colleagues Indicate That She Knows Roe v. Wade Is About to Be Overturned?
Redstate
Woman Who Stopped at Lab Monkey Crash Site Is Now 'Sick'
PJ Media