Austin Bay
|
Posted: Oct 30, 2019 12:01 AM
Share   Tweet
The opinions expressed by columnists are their own and do not necessarily represent the views of Townhall.com. 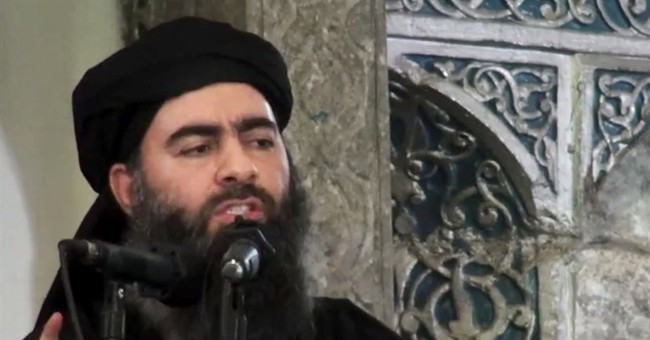 What a shame Washington political and media elites couldn't briefly halt their uncivil domestic political brawl to applaud a victory over the world's most vicious international terrorist organization, the Islamic State group of Iraq and Syria, or ISIS.

My obituary sketch of al-Baghdadi's documented atrocities is the spine of the deterrent message. ISIS agitprop internet videos extolled these crimes as proof of the group's invincibility.

Mass rapist: The rape and torture of Yazidi women in Iraq's Sinjar region wasn't the only example, but it was notorious. Forgot about those women? The survivors have not forgotten.

Savage torturer: so many examples, beheading journalists and Iraqi soldiers among them. The incineration of Jordanian Air Force pilot Muath al-Kasasbeh epitomized barbaric cruelty. ISIS killers locked him in a metal cage and burned him to death. This "snuff video" became a recruiting ad that told Arabs who opposed ISIS: "We are invincible, and you are helpless. Surrender, or die burning in a cage, with a video of your death posted on YouTube."

Slaver: ISIS thugs took hundreds of Yazidi women as sex slaves. Al-Baghdadi had at least one. Many Yazidi women died in slavery. However, Yazidi Nadia Murad survived slavery and later won a Nobel Prize for her activism.

American aid worker Kayla Mueller belonged to an ecumenical Christian group. In 2013, ISIS captured her in Syria. She was tortured, enslaved and, in 2015, murdered. A photo sent from ISIS to her family showed her with facial bruises and wearing a black hijab.

But in 2019, the Pentagon named the operation to arrest or kill al-Baghdadi Operation Kayla Mueller.

Due to Beltway brawling, that name has received little notice. However, it puts a woman who'd been raped, a dead lady's face, on the Delta Force assault and signals that the U.S. military attack on al-Baghdadi and his henchmen sought personal justice for the slaughter of an innocent human being who came to Syria to aid refugees.

This is information warfare kudos to the Pentagon and Trump administration, for at some psycho core, zealot killer creeps like al-Baghdadi think they are untouchable. Like Osama bin Laden, al-Baghdadi thought he had divine sanction. There's a good chance he told followers that his personal survival indicated that ISIS' loss of territorial caliphate was a temporary setback.

Al-Qaida and ISIS both possess a dark genius that must be challenged. As information warriors, they link the Muslim world's angry, humiliated and isolated young men to a utopian fantasy extolling the virtues of violence. They appeal to perceived grievance. Al-Qaida's 9/11 attacks and ISIS' territorial caliphate made them global information powers.

ISIS continues to cast itself as a global social media power, using Facebook and Twitter to reach millions of young Muslims worldwide.

After Delta Force nailed al-Baghdadi, President Trump used Twitter and television to attack al-Baghdadi's arrogance, swagger and narrative of invincibility. Trump said: "He died after running into a dead-end tunnel. ... The thug who tried so hard to intimidate others spent his last moments in utter fear, in total panic and dread." The ghoul detonated a suicide vest, killing himself and three of his children.

Trump targeted potential recruits the fanatic might inspire: "(I)t's something that should be brought out so that his followers and all of these young kids that want to leave various countries ... see how he died. ... He didn't die a hero. He died a coward -- crying, whimpering, screaming."

In comparison, The Washington Post's coddling in its now-changed headline "Abu Bakr al-Baghdadi, austere religious scholar at helm of Islamic State, dies at 48" was a depraved distortion of reality that undermines anti-terror efforts.

One Muslim isn't coddling al-Baghdadi. In a Voice of America interview, Safi al-Kasasbeh, the Jordanian pilot's father, said (as translated in English), "I want to congratulate all Muslims, including myself for getting rid of this virus (Baghdadi), which has spread to the Arab body."

Nobel Prize winner Nadia Murad took her war to Twitter: "Al-Baghdadi died as he lived -- a coward using children as a shield. Let today be the beginning of the global fight to bring ISIS to justice."

Kudos to her, too.