Austin Bay
|
Posted: Jul 03, 2019 12:01 AM
Share   Tweet
The opinions expressed by columnists are their own and do not necessarily represent the views of Townhall.com. 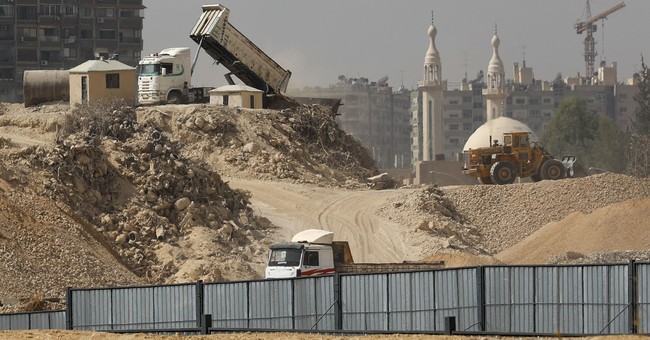 Don't dismiss the Ottoman link as a quaint historical reference. Ottoman rule influences contemporary Libyan politics in odd but evident ways. Empire connections have some resonance in 21st-century Turkey. Imperial glory may well have psychological import for the authoritarian Erdogan. His nickname is Sultan Recep.

Libyan illegal migrants attempting to cross the Mediterranean Sea and enter Europe keep Libya's conflict on European media radars. The Islamic State has a presence in Libya, so terrorist infiltration is a concern. Tunisia and Egypt fear "spillover" combat.

Turkey is a NATO member. When a NATO member threatens war, NATO allies review their treaty commitments relative to the potential war zone.

Through NATO, Turkey cautiously provided some support for Libyans rebelling against dictator Muammar Gaddafi during Libya's 2011 Arab Spring revolution. Turkey had reasons for caution. In 2011, a substantial number of Turkish citizens were in Libya, many working for Turkish construction firms. Officials in Ankara were worried that Gaddafi or a rebel faction might hold Turks hostage.

In 2015 and 2016, the LNA, rooted in "eastern" Libya, began taking cities in the east. Most of Libya's oil production and export facilities are in the east. The LNA secured them and began driving Government of National Accord forces further west. The LNA is sponsored by the eastern government: the House of Representatives, headquartered in Tobruk (not far from Egypt). The GNA is headquartered in Tripoli, the national capital, located way out west.

Deep divisions exist among and between Turkey and the leading Gulf Arab states about Syria. The same holds true for Libya. The United Arab Emirates, Saudi Arabia and Egypt back the LNA, as (allegedly) does France. Turkey and Italy support the GNA, and it is nominally supported by the UN. The GNA, however, only controls the Tripoli area. Stranger bedfellows: Russia claims to support the LNA, and the U.S. has cautiously encouraged it. The LNA is led by the controversial general Khalifa Haftar. He was exiled in the U.S. for several years.

In April 2019, the LNA launched an offensive to take Tripoli. In June, as GNA militias near Tripoli began to defect, the LNA and UN officials recommenced ceasefire discussions. Combat near Tripoli has left an estimated 600 dead. Over 120,000 civilians have fled their homes to avoid the violence.

Then LNA fighters near the eastern seaport of Benghazi seized six Turkish seamen. Understand the LNA accuses Turkey of encouraging militant Islamic militias in Libya. The LNA freed the sailors after Erdogan's threat. He had cause to demand their release. His threat, however, was quick and not proportional, especially with ongoing negotiations.

The Ottoman Empire had two major provinces in contemporary Libya: Tripolitania and Cyrenaica. Tripolitania was the west, ancient Cyrenaica the east. The Ottoman divide reflected the Roman Empire's division. The Turks imposed a brutal and corrupt rule in both provinces. Italian colonial control, from 1912 to 1943, continued the legacy of foreign misrule. That affects 21st-century Libya.

Italy, a rising power seeking a neo-Roman Empire, invaded Libya in 1911, starting the Turco-Italian War (1911-1912). This obscure conflict was the first in an explosive chain of three little wars involving the Ottoman Empire, a declining great power. The First Balkan War (1912-13) and Second Balkan War (1913) followed. In 1914, World War I erupted, with the Balkan "powder keg" supplying the spark.

Great powers once again contest the world. Pray that 2019 does not follow this script.