Meanwhile, Back in Somalia

Austin Bay
|
Posted: Aug 01, 2018 4:17 PM
Share   Tweet
The opinions expressed by columnists are their own and do not necessarily represent the views of Townhall.com. 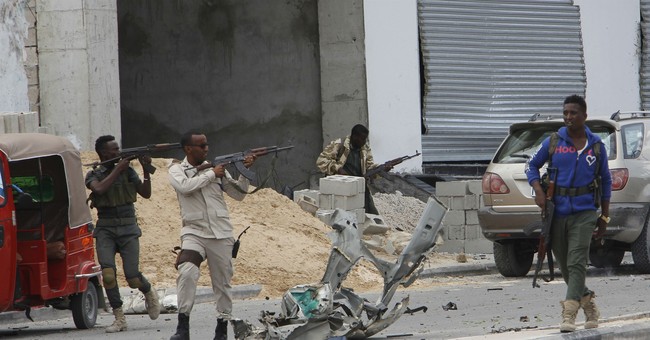 Since April, 1992, an international peacekeeping or monitoring force of some type has attempted to reduce the mayhem in war-wracked Somalia. Subtract 1992 from 2018: you get 26 years.

Prepare to add more. This week the UN Security Council voted to maintain the UN and African Union Somali peacekeeping operation (African Union Mission in Somalia, AMISOM) through at least 2020.

Troops from Kenya, Uganda, Burundi, Djibouti and Ethiopia man AMISOM and do the brunt of the fighting and security work in southern Somalia. AMISOM soldiers battle Al Shabaab Islamist terrorists, protect the national government in Mogadishu, the capital, and attempt to separate warring Somali clans.

Why are Americans involved? Al Shabaab has ties to al-Qaida and the Islamic State. In 2006, the group managed to seize Mogadishu. 2006 pre-dates the Islamic State but Al Shabaab envisioned establishing a militant terrorist state. To be succinct, Somalia in 2006, like Afghanistan in 2001, was an anarchic nowhere apocalyptic terrorists could use to launch global attacks.

Somalia in 1994 connects to Afghanistan in 2001. Recall that the U.S. military has previously visited Somalia in force. Operation Restore Hope (December, 1992) deployed to help the UN Operation in Somalia (UNOSOM I) feed and protect five million people. The Blackhawk Down debacle in Mogadishu (October, 1993) where Army Rangers fought hand to hand with militants led to America's 1994 withdrawal.

Declassified al-Qaida documents (Letter 3 to al-Qaida's "Africa Corps") revealed the U.S. withdrawal fed militant fantasies. Al-Qaida's correspondent wrote: "The Somali experience confirmed the spurious nature of American power and that it has not recovered from the Vietnam complex. It fears getting bogged down in a real war that would reveal its psychological collapse at the level of personnel and leader."

In 1992, Somalia was a failed state, as was Afghanistan. After the Russian withdrawal, it fell to civil war. The Taliban didn't emerge until 1994.

2018's list of failed states includes Somalia and Afghanistan. Congo, the Central African Republic and near-to-Somalia South Sudan are on it. So is Yemen, a short boat ride from Somalia. Syria is a mess, but two major powers are on the ground, the U.S. and Russia. Libya and Venezuela are major messes but they have oil to sell. Haiti is on the list; it is only one hurricane or earthquake from mega-disaster.

Are all of these 2018 failed states potential Islamist terrorist bases? With the possible exception of Haiti, the answer is yes. From an American perspective, this argues for continued close intelligence surveillance operations, special operations raids and drone strikes in these chaotic places. In other words, a call for smart guard duty, not peacekeeping missions and nation building.

However, nation "re-organization" might be beneficial, at least in Somalia's case.

Julius Caesar said Gaul split into three parts. Somalia has three parts: Somalia (the south), Puntland and the Somaliland Republic. Somaliland occupies northwestern Somalia and in the early 1990s declared independence. It is far more stable than the rest of Somalia.

Egyptian Queen Hapshetsut sent an expedition to the Land of Punt in the 15th century B.C. 21st century Puntland is the Horn of Africa's elbow. For several years it was called Pirate Land.

It may be time to separate comparatively stable Somaliland from the rest of Somalia's problem.

I am not predicting peace. Since January 2018 Somaliland and Puntland have revived a border war.

Hey, it's one of Earth's hardest corners.