Austin Bay
|
Posted: Jul 18, 2018 12:01 AM
Share   Tweet
The opinions expressed by columnists are their own and do not necessarily represent the views of Townhall.com. 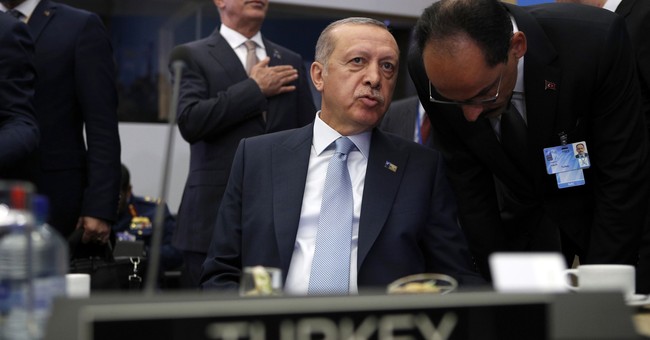 The increasing strain -- to the point of permanent break -- is bad news for an already unstable Middle East, Central Asia and eastern Europe.

Here's some background: The Turkish Republic that Mustafa Kemal Ataturk created in 1923 from the ruins of the post-World War One Ottoman empire was decidedly secular. Ataturk sought political relationships with western European democracies and pursued technical modernization.

The hardest blow came June 2018, when Erdogan and his allies won the national elections. Erdogan is now the powerful president and his coalition dominates parliament. Super President Erdogan may lead Turkey for quite some time, possibly through 2034.

Erdoganist Turkey's de facto dictatorship uses Islam as a sectarian sales pitch for Erdogan's cult of the personality program. Which means that contemporary Turkey is Erdoganist, not Islamist.

The American-Turkish defense relationship matters -- or it did matter. For seven decades, U.S.-Turkey defense cooperation -- both bilateral and through NATO -- has benefited all parties. One of the benefits was the defeat of the Soviet Union, which was a big-time payoff in the view of anyone with common sense.

However, America's Cold War Turkish ally was a Kemalist Turkey with a reliable military that could be trusted to operate American-made F-16 jets.

Were there Washington-Ankara disagreements? There are always disagreements among allies; allies are not clients.

However, the situation has changed. Erdogan's shenanigans and consolidation of power have created fundamental problems. The U.S. Senate's attempt last month to ban Turkish acquisition of the F-35A Joint Strike Fighter reflects the deep concern knowledgeable defense officials for an Erdogan-led government.

The F-35 is a major defense program, and at least two Turkish companies make key F-35 components. Turkey intends to acquire 116 of the high-performance stealth aircraft.

Full disclosure: on June 21, Turkey received its first F-35. The planes then deployed to Luke Air Force base, Arizona, where Turkish pilots will learn to fly. The F-35 won't join the Turkish Air Force until late 2019 or early 2020.

The U.S. State Department regard the S-400 purchase as a unique threat to NATO aircraft. Not that Turkey would fire on NATO aircraft, but that Russia might gain information on NATO air defense and aircraft (like the F-35) via Turkish deployment of the S-400. The S-400 deployment could allow Moscow to gain intelligence about every NATO nation's stealth fighter aircraft.

The Russian S-400 also creates inter-operability issues with other NATO air defense systems. Turkey could be a nominally political ally but a technological enemy.

A bipartisan group within the House of Representatives has also tried to attach amendments to the 2019 National Defense Authorization Act (Pentagon budget) the stop any the transfer of any F-35s to Turkey until several diplomatic issues are resolved. The demands include the prosecution of Erdogan's bodyguards who attacked anti-Erdogan protestors when the Turkish leader visited Washington in May 2018.

A rather minor demand? Sure, but one that says a lot about Erdogan's enormous ego.

In lieu of the S-400, Washington has offered to sell Turkey Patriot SAMs and potentially Patriot Pac-3 missiles, which have anti-missile capabilities.