Austin Bay
|
Posted: May 02, 2018 12:01 AM
Share   Tweet
The opinions expressed by columnists are their own and do not necessarily represent the views of Townhall.com. 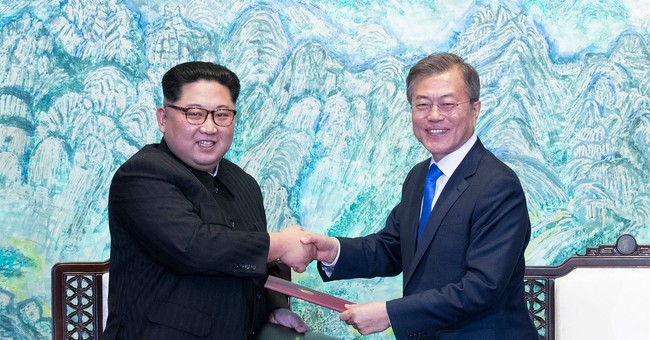 Here's the major risk: The North Korean Kim regime has a hideous record for murder, intimidation and crime, and it is a genuine threat to peace. But for the restraint of South Korea and the U.S., the Kim dictatorship's bloody violations of the 1953 armistice could have easily ignited another combat phase of the Korean War. The January 1968 Blue House Raid, in which North Korean commandos attempted to assassinate South Korean President Park Chung-hee, is all but forgotten. It must not be. The regime has engaged in the mass starvation of its own people. The regime is still deeply involved in organized crime, with drug-trafficking and money-laundering operations its forte.

This criminal regime cannot be allowed to acquire nuclear weapons and the means to use them.

The regime's arrogance is a factor. In the past, the regime has been able to murder and intimidate and then withdraw, often extorting economic benefits.

Will it be different this time? The Kim regime's insistent offer to discuss denuclearization is different. President Moon's statement that U.S. President Donald Trump deserves a Nobel Peace Prize is extremely different, until you understand the step-by-step process Moon lauds: the Trump administration's exercise in coordinated coercive diplomacy. From late February 2017 to April 2018 the Trump administration pursued a combined diplomatic, economic and military effort with the goal of eliminating North Korea's nuclear weapons.

Arguably the timeline begins in October 1999, when Trump told Tim Russert of "Meet the Press" that if he ever had the chance he would end the North Korean nuclear threat. How? "First I'd negotiate," Trump said, "and be sure I could get the best deal possible. ... The biggest problem this world has is nuclear proliferation. And we have a country out there in North Korea which is sort of wacko, which is not a bunch of dummies, and they are developing nuclear weapons. ... If that negotiation doesn't work then better solve the problem now than solve it later."

Fast-forward 18 years and Trump has the chance.

March 2017: Then-Secretary of State Rex Tillerson declared, "The policy of strategic patience has ended. We are exploring a new range of diplomatic, security, economic measures. All options are on the table."

June 2017: In Singapore, Secretary of Defense James Mattis addressed North Korea's "clear intent" to acquire nuclear-armed missiles. Mattis said that he believed "China will come to recognize North Korea as a strategic liability, not an asset." Mattis said the U.S. would "engage China diplomatically and economically to ensure our relationship is beneficial." That was a carrot.

Trump issued an executive order some analysts called a declaration of economic war on North Korea. His administration would exert "maximum pressure" on North Korea until the criminal state denuclearized. The pressure included U.S. Air Force strategic bombers flying "show-of-force" missions around the peninsula, including a foray in international airspace over the East Sea off North Korea's coast. The pressure included psychological pressure on "Little Rocket Man" -- Kim Jong Un. Trump coined that nomme de insult in September, and it was a useful punch.

During the winter, North Korea felt the harsh bite of ever-tighter economic and political sanctions.

On March 5, 2018, Kim Jong Un said he was willing to do something he had said he would never do: discuss denuclearizing his regime. He made no demand of South Korea and the U.S., other than that they meet to discuss the subject, face to face.