Austin Bay
|
Posted: Jan 04, 2018 12:01 AM
Share   Tweet
The opinions expressed by columnists are their own and do not necessarily represent the views of Townhall.com. 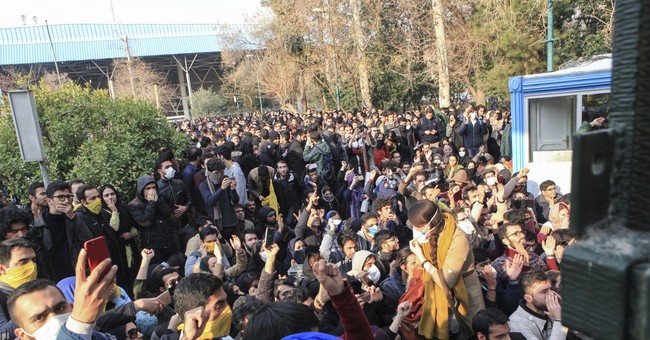 The anti-regime protests now jolting Iran send the world two core messages -- one dismal and sobering, the other an explosive cocktail of the deadly and the hopeful. Both core messages provide guidance for open-minded American and free world policy makers.

It takes a narrow-minded Obama Administration apologist to miss the dismal and sobering message. Here it is, offered with prayers for the abused Iranian citizens who suffer the consequences: Not quite nine years after Tehran's theocrat fascist dictators and their brutal Iranian Revolutionary Guard Corps thugs crushed the 2009 Green Movement, Iran remains a domestic political disaster and economic disaster.

Sanctions relief provided by the Obama Administration and its so-called nuclear weapons deal didn't jump start the Iranian economy as Iranian president Hassan Rouhani promised they would. Where did the dollars and euros and "trade credits" go? Critics -- and this category includes a substantial swath of the Iranian public -- contend the money went into nuclear and ballistic missile weapons programs and the bank accounts of insider ayatollahs, IRGC officers, secret police officials and assorted Lebanese Hezbollah terrorist proxies waging war in Syria and Yemen.

Considering the context, 2018's Iranian public outrage rates as double dismal. In the last nine years the Iranian regime has not moderated, as the Obama Administration contended it would. Rather, the mullah regime has fossilized, dishing out the same violent, repressive, rip-off poison it dished nine years ago.

But here's a difference that's dangerous for the ayatollahs. In 2018 the robed dictators know they are a brittle fossil, ripe for collapse. Why? Well, Donald Trump is the U.S. president, not a Barack Obama-type supplicant who fervently believes a nuclear weapons deal with Iranian militants is the ultimate in peacenik presidential legacies.

The result of the dismal domestic political and economic morass and the presence of the Trump Administration: Iran's dictators enter 2018 thoroughly shaken.

Now here's the dangerous and hopeful message: a substantial percentage of the population (likely the majority) despises the mullahs and their thugs and once again has the courage to take to the streets and show it.

This action is very dangerous because the regime may respond with the Tehran equivalent of a Tiananmen Square (China 1989) bloodbath -- with tens of thousands of Iranian civilians killed by the thugs, and military.

However, hatred for the regime is hopeful for several reasons. The street protests and citizen demands demonstrate the desire for freedom continues to empower Iranians across the socio-economic spectrum. Confronting the secret police and regime thugs show that Iranians know the corrupt dictatorship is responsible for the political mess and economic disaster.

Though many media outlets are reluctant to admit it, freedom protestors throughout the world rely on a positive, supporting reaction by the U.S. president, his administration and other free world leaders.

In contrast, the Trump Administration has quickly backed the protests, and backed them with diplomatic and rhetorical spine.

Trump's January 1, 2018 tweet captures the revolutionary moment: "Iran is failing at every level despite the terrible deal made with them by the Obama Administration. The great Iranian people have been repressed for many years. They are hungry for food & for freedom. Along with human rights, the wealth of Iran is being looted. TIME FOR CHANGE!"