Austin Bay
|
Posted: Nov 15, 2017 12:01 AM
Share   Tweet
The opinions expressed by columnists are their own and do not necessarily represent the views of Townhall.com. 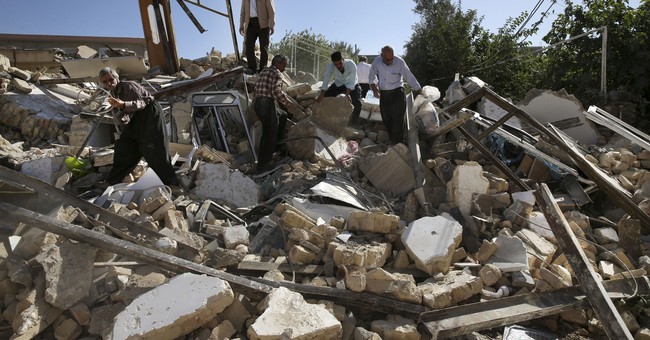 The Iranian-sponsored November 4 ballistic missile attack on Saudi Arabia's capital, Riyadh, continues to roil the Middle East -- and it should.

Last week, I wrote a column arguing that missile attack signaled an escalation in the simmering regional war between Sunni Muslim Saudi Arabia and Iran's Shia Islamic revolutionary regime. Their proxy war in Yemen would become more intense and could spread to the Persian Gulf littoral.

Since that column appeared, U.S. military sources have confirmed that the missile fired from Yemen by Iran-backed Houthi rebels was indeed manufactured in Iran. From its launch site to the point where it was intercepted by a U.S.-made Patriot anti-missile missile, the Iranian missile traveled almost 1,000 kilometers. Moreover, Saudi allegations that Iranian technicians were directly involved in preparing the missile and Iranian military advisers supervised the launch are now regarded as highly credible.

If these allegations are fully substantiated, we have an frightening but instructive example of a nation state (Iran) using a proxy force (Yemen's Houthis) to conduct a "plausibly deniable" ballistic missile attack on an enemy nation state (Saudi Arabia).

Illicit actors, like Iran's robed dictators, crave "plausible deniability," which in international affairs is loosely defined as creating an operational cover story that gives the illicit actors a media shield for denying "knowledge of or responsibility for" a particularly heinous and barbaric act.

Here's the bottom line media ploy and political gambit: "I can shoot at you but you can't prove I did it so if you counter-attack you're the aggressor."

Childish? Welcome to the UN and the world of CNN.

Unfortunately, this game isn't Romper Room or cable news entertainment. The stakes in lives are high and with expansionary powers like Khomeinist Iran eventually the stakes include mass casualties.

The November 4 missile carried a conventional high explosive warhead. Short-range ballistic missiles like the one fired at Riyadh can carry "unconventional" chemical and nuclear warheads.

I am not suggesting Iran would be allowed to fight a "plausibly deniable" nuclear war by launching a nuclear attack using a proxy force in a third country, but the Iranian regime intends to acquire nuclear weapons and the ability to use them. History should damn the Obama Administration for appeasing the ayatollahs' nuclear demands and endless appetite for domination -- which is fodder for a future essay.

Which brings us to another feature of the escalating Saudi-Iran war -- Saudi Arabia's quasi-alliance with Israel.

In the past threats by Iran's dictatorship have given Saudi Arabia and Israel common cause. In 2010 media reported clandestine meetings between Saudi and Israeli intelligence officials in Amman, Jordan. That same year the London Times reported that Saudi Arabia had agreed to provide a "narrow corridor of its airspace in the north of the country" to allow an Israeli air attack Iranian nuclear facilities -- should the need ever arise.

At the time the Saudis denied the report, which made sense given Arab sensitivities. However, events since November 4 suggest that the Iranian threat has changed the Arab-Israeli political calculus. The Saudis are now calling Lebanese Hezbollah "the head of the snake" in Iran's imperialist expansion in the region. The Saudis contend Hezbollah wages war as an Iranian surrogate in Lebanon, Iraq, Syria, Yemen and Bahrain.

Even more remarkable are reports that Saudi Arabia wants Palestine's Fatah movement to reach an accommodation with Israel. Why? Because the threat Iran presents to Gulf Arab states is deadly, and Israel has military capabilities that give Iran great pause.