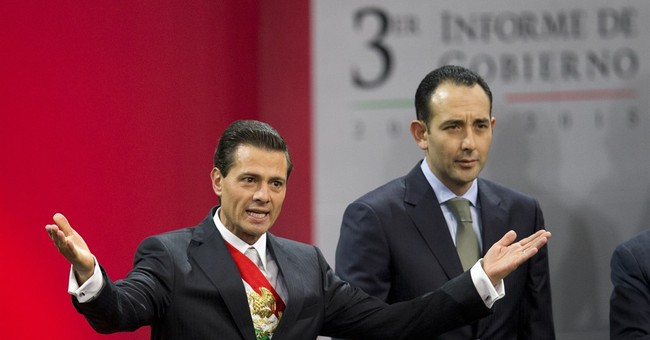 Trending
On September 13, a case of mistaken identity left 12 dead and 10 wounded when Egyptian forces fired on a tour group. The Egyptian patrol mistook the tourists for terrorists infiltrating from Libya.

Eight of the dead and six of the wounded were Mexican citizens. Mexico's Foreign Ministry condemned the massacre. President Enrique Pena Nieto expressed personal outrage. He wrote this post on Twitter: "Mexico condemns these acts against our citizens and has demanded that the Egyptian government conduct an exhaustive investigation of what happened."

Pena Nieto has understandably taken the lead in expressing his nation's sense of loss and outrage. At the same time, Pena Nieto's proliferating critics note Egypt's mistake has provided him with a legitimate emotional issue that distracts media attention from his dismal approval ratings.

The distraction will be temporary, for Pena Nieto faces a crisis of personal credibility. Fueled by personal scandals, a stagnating economy and rampant criminal violence Pena Nieto pledged to curb, public distrust in him and in Mexico's governing institutions is disturbingly evident.

The event exemplifying Mexico's crooked dilemma involves another slaughter of Mexican citizens by security forces, in this case Mexican police. I refer to the Iguala massacre (September 2014), where municipal police from the town of Iguala in collusion with local gangsters murdered 43 students at a Guerrero state teachers college. Iguala Mayor Jose Luis Abarca and his wife, Maria de los Angeles Pineda, ordered the police to attack the students. Pineda wanted to make certain the students did not protest an election event.

The crime incited national anger. In October, demonstrators in several Mexican states accused the Guerrero state government of participating in the crime and the national government of responding slowly.

Pena Nieto promised action. Abarca and Pineda were arrested in November 2014 and charged with organized criminal activity. In January 2015, the federal attorney general's office concluded that the missing students had been murdered and their bodies incinerated. DNA experts could only identify the remains of one student; the intense fire made DNA identification all but impossible. Prosecutors, however, had confessions from 39 people (most of them police and gang members) who either committed the murders or helped burn the bodies.

National closure, once the perpetrators are tried and punished? Not quite. In early August, the leader of a group that spearheaded the search for the student remains was murdered in Guerrero state. This month (September 6), independent investigators from the Inter-American Commission on Human Rights reported they could find no evidence to support the government's claim that the victims' remains were incinerated.

Other incidents in July and August 2015 have spurred deep doubt about the government's trustworthiness. On July 11, Sinaloa cartel drug lord Joaquin Guzman escaped from prison via a long tunnel. Despite government denials, the public suspects prison guards were bribed. Pena Nieto has taken deserved heat for the security failure. In early August, a journalist and a student activist investigating the governor of Veracruz state were murdered in Mexico City. The governor, Javier Duarte, is a member of the Institutional Revolutionary Party (PRI), Pena Nieto's ruling party.

The PRI connection definitely touches Pena Nieto, who portrayed himself as a new breed of PRI politician. The old, crooked PRI was gone. Pena Nieto promised to go after corrupt politicians.

Pena Nieto, however, now faces accusations that when he was governor of the state of Mexico (2005-2011) he awarded construction companies contracts in exchange for luxury property. One of the contractors involved is a long-time supporter of Pena Nieto and the PRI.

In late August, news broke that Pena Nieto's finance minister, Luis Videgaray, received a luxury vacation home from a company handling government construction contracts. Allegedly, Videgaray paid for the home after the federal comptroller's office began investigating. For many Mexicans, this is another example of embedded corruption for which the political class pays no price. And they are tired of it.