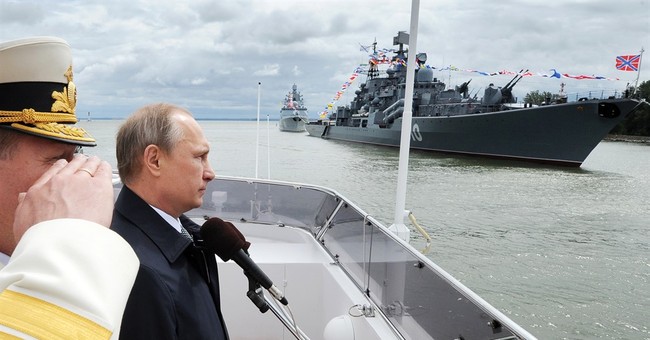 Putin delivered his accusation in what I call his "Vlad, Ace of Spies and KGB Colonel" mode. This patterned shtick is Cold War tough guy by design, theatrical photo-op Viagra for aging Communists. Along with his accusation, Reuters published a photo of Putin riding in a bathyscaphe (deep-sea ocean research submersible). As the bathyscaphe's bubble capsule submerges, Vlad (wearing a relaxed open-collar shirt, circa James Bond in Jamaica) gives the Black Sea depths an iron-man stare.

Putin's accusation repeats another pattern. Based on past events, accusing Ukraine of escalation is propaganda cover, a cynical signal that his soldiers and proxy forces have begun new offensive operations. Putin has escalated, with calculation, and shattered the Minsk agreement ceasefire of February 2015. A wily propagandist, Putin always works a thread of truth into his lies. Full-scale direct clashes can be avoided -- if Ukrainian defenders surrender or retreat.

Violating agreements is yet another pattern: By invading and annexing Crimea, Putin shredded the 1994 Budapest accord. That deal traded Ukraine's nukes for Russia's guarantee that it would not violate Ukraine's territory. The Clinton administration supported the accord.

Despite the Minsk agreement, fighting in eastern Ukraine has never stopped, nor has Putin's propaganda war. It's another pattern: Since spring 2014, combat in Ukraine has spiked and then lapsed. It takes time, but solid evidence collects that Russian soldiers or proxies have spiked the combat. This repeats a historical pattern: the creeping war of aggression. This is not a new form of warfare. In 1991, Serb dictator Slobodan Milosevic ran one in Croatia and Bosnia.

Many observers expected a late-summer offensive, likely a drive on the Ukrainian Sea of Azov port of Mariupol. This fits a grand pattern. In Europe, August is a good month for vacations and war. The days are long and dry. An attacker can seize territory through late September, and then General Winter will help slow counterattacks.

This week, a U.S. State Department spokesman accused Russia and its proxy separatists of launching new attacks "just as they escalated the conflict last August."

Mariupol lies between Russian-occupied areas and the Crimean peninsula. Seizing it is a logical operation, militarily and politically. Militarily, taking Mariupol robs Ukraine of a seaport and is a big step toward securing a land route to Crimea. A land corridor permits rapid tank and mobile infantry movement to and from Crimea.

It would be a major escalation, but Russian forces in Crimea could support the Mariupol attack by launching sorties north and east to pin Ukrainian units. With Russia and Crimea connected, Russian forces are poised for more grandiose ventures, such as isolating eastern Ukraine or attacking toward Kiev.

Seizing Mariupol would give Putin a much-needed short-term domestic political boost. The Organization for Security and Cooperation in Europe (OSCE) Observation Mission reported it has evidence that Russian forces have used Grad rocket barrages in recent fighting. Though fighting began to intensify during the first week of August, a Radio Free Europe report suggests the Russian offensive began on August 13, when Ukrainian forces noted "the heaviest exchanges of tank and rocket fire" since the February ceasefire.

Now heavy fighting has erupted around "a strategic highway linking ... Mariupol with Donetsk."

Putin's Guns of August are blazing.