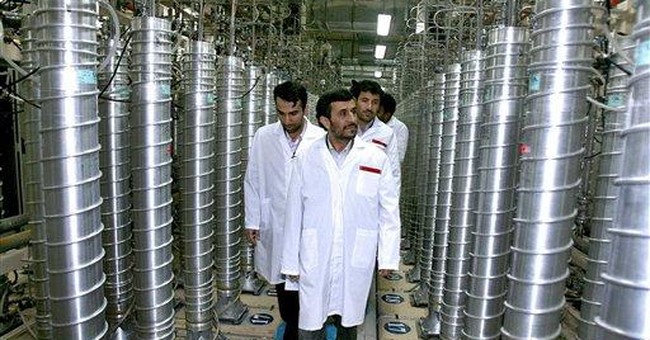 Iran's wicked conditions prior to Barack Obama's fanciful "no preconditions" now present themselves -- with the mullahs' rogue nuclear program 13 months closer to producing a bomb.

Last week, Secretary of State Hillary Clinton focused attention on the Iranian regime's powerful and tentacled radical militia, the Iranian Revolutionary Guards (IRG). "Iran is moving toward a military dictatorship," Clinton said. "The trend with this greater and greater military lock on leadership decisions should be disturbing to Iranians as well as those of us on the outside."

Trend? IRG power is old news, and one of a multitude of wicked conditions candidate Barack Obama rhetorically obscured amidst his promises of hope, change, "smart" diplomacy and decisive negotiations with the robed dictators sans preconditions.

For three decades, the Iran's Khomeinist clerics and their "armed wing" (the IRG) have entwined so tightly it's tough to separate the snakes. In the mid-1990s, the IRG, having supplanted the Iranian Army as the regime's primary military force, became demonstrably influential in foreign affairs. As the ire of the Iranian people rose, spurred by corruption and a failing economy, the IRG's domestic clout increased.

When public anger with the regime spilled into Tehran's streets last year, IRG commanders monitored local police to ensure "reliability" and prepared to crack down. The Khomeinist street militias that continue to attack pro-democracy demonstrators have IRG ties.

The regime that dubbed Israel a "one bomb state" seeks nuclear weapons. The IRG, via its spies and special forces, links to Hamas in Gaza and Hezbollah in Lebanon. Iran also wages war on Iraq's emerging democracy.

For these and other loathsome prior conditions, differentiating between the IRG and the regime of President Mahmoud Ahmadinejad and Supreme Leader Ayatollah Ali Khamenei is difficult.

Yet Obama extolled president-level negotiations with this Siamese-twin thugocracy. Obama's less-fossilized apologists may now defend his initiative as naive, but when he made it many of us called it what it was: stupid because it gave a brittle and brutal regime a political success without a price. It also played into the regime's game of strategic delay. The regime gives a little when sanctions loom, slides when Europeans fret, hugs Chinese oil brokers when America rattles sabers but always keeps the uranium centrifuges spinning.

Obama's "no preconditions" pitch was part of a cynical campaign ploy a fawning press corps trumpeted. Recall Obama promised "smart diplomacy" and accused the Bush administration of failing to use diplomatic means.

When Rep. Tom Lantos, in a dismissive and arrogant tone, asked Crocker if the U.S. would pursue diplomacy with Iran, Crocker replied that he had talked with the Iranians, and "the conclusion I came away with after a couple of rounds was that the Iranians were only interested in the appearance of discussion, of being seen at the table with the U.S. instead of actually doing serious business."

Crocker provided Obama and his media entourage with a teaching moment -- but it was ignored, or worse, castigated as propaganda, to the detriment of Iran's own oppressed people and everyone seeking to avoid a nuclear war in the Middle East.

Is Obama finally educable? Does he understand the threat presented by Khomeinists with nuclear arms? Does he understand a summit with an American president is a political coup for dictators, and granting one should require concessions from noxious regimes? Until the thugs make them, keep direct discussions at low or unofficial levels -- like George W. Bush did.

Clinton's hype of old news does provide cover for a policy shift by the administration.

Let's hope that change is coming. Petraeus, following Clinton's statement, said the U.S. has put Iran on a "pressure track." Good. The Green Movement opposition needs support. Sanctions that truly sanction are difficult without Russian and Chinese blessings. That means Obama must prepare for military strikes on nuclear sites.