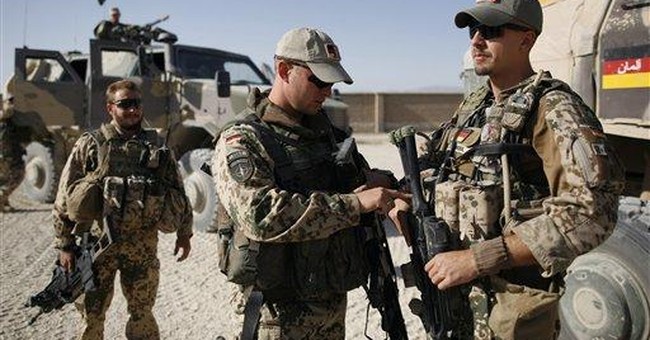 Morale matters -- especially in a time of war.

Morale even matters in an "overseas contingency operation," the hazy bureaucratic phrase the Obama administration sought to substitute for "The Global War on Terror." The GWOT is a poor name in my opinion (terror is a tactic), but at least it sketched the wicked problem al-Qaida's 9-11 attack posed -- a war fought on a global scale, where transportation, weapons and communications technologies had shrunk the planet. Sept. 11 demonstrated that the distance between "over there" (overseas) and "over here" could be easily bridged by a terrorist organization.

Morale is a special psychological fuel for human beings, the extra spark that powers extra efforts -- the kind of efforts that are required to identify and thwart the next 9-11.

At the moment, however, morale at the Central Intelligence Agency appears to be plummeting. If we can believe U.S. Attorney General Eric Holder, CIA officers will be prosecuted for alleged torture of al-Qaida terrorists, or at least "misuse" of "enhanced interrogation techniques."

"Enhanced interrogation techniques" is bureaucratese for "scaring the hell out of the terrorist so that he talks." Is this torture? Maybe, maybe not, but indicting CIA interrogators is a mistake for many reasons -- the long-term effects on agency morale and recruiting being two of the most important. If Holder is truly serious about the subject of torture -- if he really believes torture occurred -- he should indict former President George Bush and former Vice President Dick Cheney. But he hasn't got the guts to do that, and if Cheney's public rebuttals are any indication, Holder doesn't have the evidence, either.

The Carter administration's "decapitation" of the agency in the late 1970s did long-term damage to the CIA. For two decades, the best and the brightest had to think twice about intelligence careers. Pay and prestige were certainly an issue, but the covert career also extracts personal costs. Operating in dark alleys and hard corners requires moral trade-offs, like paying Guatemalan thugs for tips. But thugs know thugs. Ten thousand bucks can elicit information that saves a hundred thousand lives. The terrorist incidents the CIA thwarts don't make the news. Professional credit is hush-hush. Spies can't get on cable TV talk shows and gush about success.

The threat posed by terrorists revived HUMINT at the CIA. Arguably, the 1998 attacks on U.S. embassies in East Africa began that process, but 9-11 accelerated it -- albeit a belated acceleration. Now the Obama administration's Holder-led crusade is putting that revival of expertise at risk. Damaging the first line of defense in what many Americans believe is now little more than a Carter administration-type political witch-hunt would be an extremely poor decision.

The penalty for intelligence failure is often cruelly simple: What you don't know will kill you. What you know but understand poorly, or what you know well but fail to use decisively, will also cost you in blood, money and political capital.

Intelligence is a difficult business and one that bad morale can damage for years by driving the best to either quit or never take the job. Good leaders raise morale. President Barack Obama needs to keep that in mind.