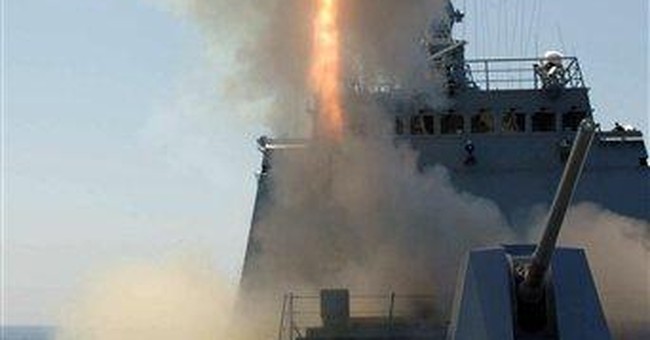 Call this coming July Fourth Dependence Day -- the day marking prudent and responsible America's realization that we do indeed depend on the diplomatic power and technological capability of anti-missile defensive systems.

The first decade of the 21st century has made it clear that we are engaged in a global battle between the constructive and the destructive -- constructive nations desiring peace and economic development confronted by destructive, extortionist rogue states and transnational terror syndicates. Ballistic missiles carrying nuclear, chemical and biological weapons are marquee weapons, militarily and politically, in the bad guys' arsenal.

Missile defense thus plays a key military, political and psychological role in this global battle. Defending American citizens is the missile defense system's first priority. However, the ability to protect allies and neutrals generates diplomatic power in the grandest sense. The system's very existence serves as a psychological counter to thug intimidation and thus creates political space for other diplomatic endeavors to counter the rogue state threat.

Extending a U.S.-sponsored missile defense beyond North America isn't a new idea. In the 1980s, when President Ronald Reagan offered to share anti-missile technology with the Russians, his leftist critics laughed, mocked and jeered. But the great intuitive politician got it right: America has no interest in an Armageddon anywhere on the planet.

Fortunately -- despite decades of active, dramatic and often hysterical opposition from the American political left -- the United States has deployed an operational missile shield. Over the years, left-liberal Democrats devoted a great deal of ink, oratory and pixels to demonizing missile-defense advocates. In 2003, current Speaker of the House Nancy Pelosi said: "The United States does not need a multi-billion-dollar national missile defense against the possibility of a nuclear-armed intercontinental ballistic missile. What we need is a strong nonproliferation policy with other nations to combat the most serious threat to our national security."

This ideologically blinkered Californian failed to make the connection between the system and an effective non-proliferation policy. North Korea's first nuclear detonation in October 2006 began to change this looney tune, which is a change for the better, but if we had followed Pelosi and Pals' snarky nostrums, today Honolulu and tomorrow Los Angeles would be defenseless.

Missile defense is, in my view, one of three "centerpieces" in a new collective international defense initiative, the other two being counter-terror cooperation and anti-proliferation programs for ballistic missiles and weapons of mass destruction. Joining this "defense club" would be a mark of sanity and stability, one dividing the constructive from the destructive.

Credit the national-media-disdained Bush administration with letting the Cold War's 1972 Anti-Ballistic Missile (ABM) Treaty expire in 2001. It was a fossil, and though the Russians howled and still gnash their teeth, they know new technology had rendered the treaty a relic. Likewise the "Bush push" accelerated missile defense deployment, putting a basic system in place in 2004.

The defense has "layers." The Patriot PAC-3 is designed for short-range, "point-target" defense. Patriot PAC-3 is a completely different missile from the Gulf War's Patriot and is a genuine anti-missile missile. The Army's THAAD (Terminal High Altitude Air Defense) missile and the Navy's Standard-2 and Standard-3 missiles extend the "anti-missile umbrella."

Ground-Based Interceptors (GBIs) are longer-range, "mid-course" interceptors. The United States has 26 GBI silos in Alaska and four in California. I'd like to double that number and deploy two-dozen GBIs in Poland as part of a "Euro-shield," but Obama's 2010 defense budget cuts funding for these systems.

North Korea's July Fourth "test" is an overt threat to the United States and, in the context of Pyongyang's threat to end the Korean War armistice, is arguably an act of "renewed war." That means we must prepare for offensive action. But defensive capability gives us other options, and in that light is a remarkably useful tool for protecting peace.