Kosovo's Birthday Beyond the Balkans 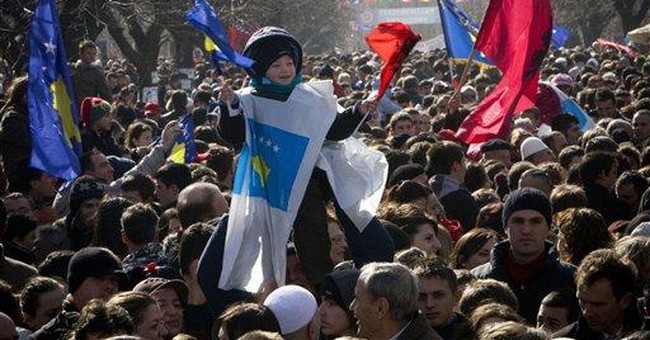 The Serbian government called the anniversary "irrelevant." Despite the Serb snub, tens of thousands of Kosovar Albanians celebrated Kosovo's first year of independence.

While Kosovo certainly has the trappings of a nation-state -- it issues passports and has its own small defense force -- "qualified" independence and "fragile statelet" are more precise descriptions. On Feb. 17, 2008, Kosovo declared "unilateral independence" from Serbia, a separation amounting to a U.N. and NATO protected secession. The unilateral act, from the perspective of Kosovo's government, sealed Kosovo's "final status" as an independent state.

But it didn't, not quite, not yet. For almost nine years, the phrase "resolving Kosovo's final status" served as diplomatic shorthand for determining if Kosovo would become a separate nation, remain part of Serbia or linger as a U.N.-EU-NATO protectorate. Cynics said it really meant "buy time and hope" because Kosovo is in the Balkans, where "final" often means "maybe, until the next bloodletting."

In the wake of the Clinton administration's 1999 Kosovo War, an evident divide in Europe emerged between nations that considered Kosovo independence a foregone conclusion and those who feared the consequences of redrawing Balkan borders. Intervention to prevent genocide -- bless you. Securing peace in Europe -- good. Giving ethno-nationalist separatism -- even superficially -- NATO and EU imprimatur? Let's think about that.

Serbia and Russia reject Kosovo's independence -- that divide runs deep and wide. Kosovo exposed other clefts, not quite so wide as those splitting Paris and London from Moscow and Belgrade, but also weighted with dangerous history. For example, NATO member Spain was wary of unilateral independence. Basque separatists in northern Spain demand their own nation and continue to detonate bombs. Romania and Greece opposed a "unilateral" Kosovo independence. They feared establishing a "separatist precedent" for spinning statelets from sovereign nations. The United States, Great Britain and France in turn argued that Kosovo would be a "one-off" (unique) situation.

Last year, in a column published before Kosovo declared independence, I wrote that "Kosovo's dangerous conundrum could provoke a Cold War-in-miniature. Is this an alarmist fret given Europe's 21st century political, economic and information connections? ... Kosovo lies in the heart of the Balkans. Whatever its final status, violent Serb and Albanian diehards will not be satisfied. Recall that progressivist nabobs at the turn of the 20th century thought modern Europe had politically evolved beyond war. Then the Balkans erupted, World War I followed, then World War II, tagged by the long thermonuclear precipice of the Cold War."

In concept, broad international and multilateral interests are supposed to dampen and ultimately absorb tough collisions like Kosovo -- interests like trade and economic development. The larger "European identity" pushed by the European Union is an attempt to diminish ethno-nationalist antagonisms.

A Russian ruse to camouflage thuggery? Yes, but it played to Russian and Serb perceptions. Russia insisted that Kosovo's unilateral independence was a "redline issue" -- as in, don't cross it. When crossed, Moscow picked up a saber.

No, it isn't quite that simple, but it's part of the wicked tangle. Earlier this month, U.S. News and World Report reported that the Obama administration's new director of national intelligence, Dennis Blair, had identified the Balkans and Kosovo as one of the five key areas of concern (beyond al-Qaida) for U.S. intelligence agencies .

A key quote: "Events in the Balkans will again pose the greatest threat of instability in Europe in 2009," Blair said. "The biggest challenge comes from the "unresolved political status of the Serb minority in Kosovo, particularly in northern Kosovo, and Bosnia-Herzegovina's continuing uneasy interethnic condominium."

Russia champions the Serb cause. The czars championed Slav ethnic solidarity when it suited them. Contemporary Russia is run by an oligarchy of crooks, but crooks schooled on the use and abuse of bitter ethnic and religious rivalries, border disputes and deep historical grievances. Final status? This Balkan problem goes well beyond the Balkans.