The Counter-Terror Raid on Sukkariyah, Syria 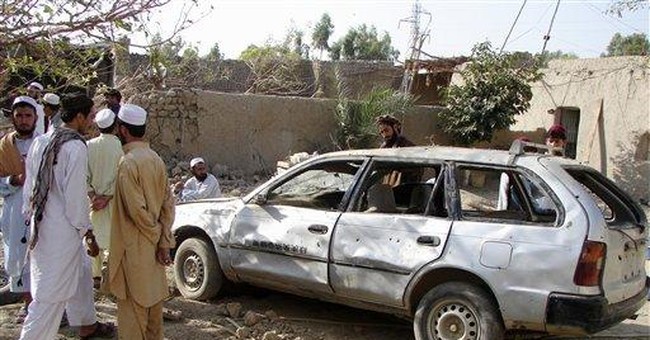 No military operation is riskier than a commando raid.

Extreme physical danger and the potentially high payoff if the operation succeeds are two reasons a dramatic raid has box-office appeal in Hollywood.

The U.S. raid last weekend certainly involved immense personal risk by the two-dozen American special operations soldiers who entered the Syrian village of Sukkariyah and shot it out with an alleged al-Qaida commander, Abu Ghadiyah, and his personal cohort. The London Times reported that Abu Ghadiyah was al-Qaida in Iraq's "commander for Syrian logistics."

The raid also entailed political risks. Syria howled, Russia yelped, even Iraq deplored it -- but that is surface political rhetoric. For five years, Iraqis have been complaining of "foreign fighter" and terrorist infiltration from Syria. Baghdad has no sympathy for a beast like Abu Ghadiyah, whose "foreign fighters" murdered thousands of Iraqis.

The U.S. raid into Syria was a surprise strike, but there was little denial. The U.S. military confirmed the raid.

So did Syrians living in Sukkariyah -- in particular, one man who showed a reporter video of U.S. helicopters buzzing his town. He shot the video using his cell phone. New technology has added light and reduced the shadow for special ops.

Sukkariyah lies close to the Syria-Iraq border. Abu Ghadiyah was in charge of the "rat line" that moved money, weapons, explosives and the "foreign volunteers" through Syria into Iraq.

Supply lines and infiltration routes run by al-Qaida and members of Saddam's regime have been operating out of Syria since 2004. In 2004, I had two different people tell me that that in 2003, after Saddam's regime collapsed, several of Saddam's former Baath Party subordinates received financial support from confederates or sympathizers located in Syria. Iron-clad intelligence connecting thugs to financiers, however, was lacking.

The intelligence now available to U.S. and Iraqi forces is much more certain. As a result, the shade for al-Qaida has also diminished.

The "rat lines" in Iraq have been badly damaged. StrategyPage.com recently reported that in the last six months "U.S. and Iraqi forces have shut down most of the smuggling gangs inside Iraq, at least those that specialize in supporting terrorists."

The Sukkariyah attack "rolls the rat line up" another notch -- a major notch.

The London Times quoted an unnamed U.S. official as saying: "As targets present themselves and are identified, they become more and more at risk. Just like in Pakistan, there will be steps taken to deal with it."

U.S. presidential campaign rhetoric to the contrary, the United States is constantly stalking al-Qaida. We hear about it occasionally, with Air Force gunship strikes in Somalia and CIA-operated Predator unmanned aerial vehicles firing missiles in Afghanistan. The Sukkariyah raid is a more explicit statement that al-Qaida remains in the bull's-eye.

It has taken a lot of effort to shrink al-Qaida's shade. People provide the kind of intelligence it takes to make the case for a cross-border raid into an allegedly neutral country.

Again, campaign rhetoric to the contrary, the change in Iraq's political environment has seeded this improvement in intelligence. Iraq offers a new political choice -- democracy -- in the Arab Muslim Middle East, a region where choice has been limited to either tyranny or terrorism.