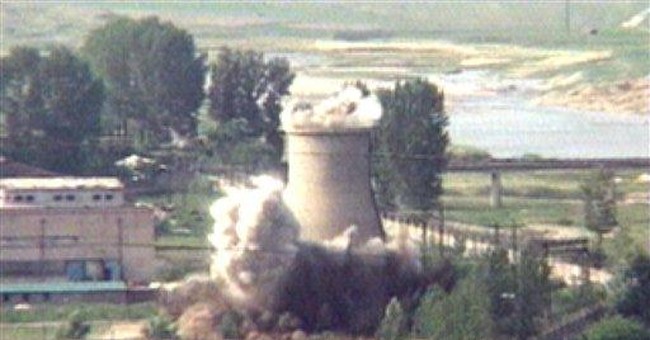 The sticker is an artifact from a visit to Germany in the early 1980s.

Das Leben Wahlen is printed in German Green Party green, with a very beautiful leaf. Stop Kernenergie appears in stark black and white, with a huge X over a nuclear power plant whose etched alien detachment is ironically reminiscent of Gort the enforcer robot, the real star of the sci-fi classic "The Day the Earth Stood Still."

Power from nuclear plants was Death with a capital D -- that was the propaganda action line. Reject nuclear energy and you are -- to pinch another label from a divisive American social issue -- Pro-Life.

Attending an anti-nuclear power march was a hip afternoon for many students in school in Germany. Trust I didn't participate. I supported building nuclear power plants.

That view wasn't a popular one among American students, either. In 1982, a fellow graduate student at Columbia (the guy's hair always smelled of cigarette smoke) told me I wanted to destroy the Earth. I remember the moment well -- tea time in Philosophy Hall, and supporting nuclear power plants is condemned as infinitely benighted and probably more dangerous than supporting the Pentagon.

Back in Texas around 1990, I got into a verbal tussle on a softball diamond because I thought the City of Austin was smart to participate in the South Texas Nuclear Project. Supporting the STNP was a tough position to take in Travis County four or five years after Russia's Chernobyl disaster, and arguing that the United States isn't Russia and our safety standards are high made no impression on an outfielder from South Austin who basically thought the United States and Soviet Union were moral equivalents.

I also pointed out that France was pursuing nuclear power, but that produced an angry, "So what?"

The structural, impersonal answer to the Deep Left Fielder's "So what?" -- some 18 years later -- is around 35 percent of the energy France consumes comes from nuclear power. You'll see higher figures (like 78 percent), but those usually reflect the percentage of French electricity generated by nukes.

Four dollars a gallon gasoline has provided a moment of clarity -- no, not for Deep Left Fielders who cling to their anti-nuclear religion, but for people able to rationally evaluate risks.

The world will continue to rely on oil and gas as its primary source of energy for at least another three to four decades -- with supplies increasingly squeezed by growing demand from "emerging economies" like those of China and India. Beijing and New Delhi recognize that the oil and gas squeeze will affect their prosperity, so they are both pursuing nuclear energy as part of an "energy mix."

Reliance on one or only a handful of energy sources is a bad idea -- which is why solar, geothermal, tidal, wind, conservation and increased energy efficiency are part of any sound strategic energy policy. Run a house on solar, and take the home off the grid. Industry requires power, however, lots of power -- and it needs reliable power.

For three decades, the anti-nuclear lobby has blunted U.S. nuclear energy efforts -- not stopped, but blunted. The United States gets roughly 20 percent of its electricity from nuclear plants -- but it should be getting at least twice that much.

Unfortunately, it takes at a minimum of five to seven years to bring a new nuclear power plant on line.

Nuclear power provided an easy partisan political demon, one with an emotional component that frustrated rational discussion. Indeed, nuclear energy has risks, but burning wood in a fire pit pollutes -- it can irritate your lungs with potentially carcinogenic smoke.

I can hear the fear-mongering ancestor of the Deep Left Fielder in a cave, oh, 60,000 years ago. "Don't burn that log, Bay. You will anger the tree nymphs, and they will destroy us."