What Chelsea Clinton Is Afraid Of

Aryssa Damron
|
Posted: Oct 14, 2016 12:01 AM
Share   Tweet
The opinions expressed by columnists are their own and do not necessarily represent the views of Townhall.com. 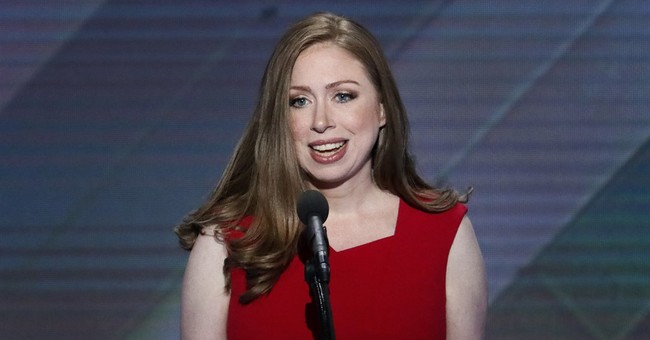 Chelsea Clinton graduated from Stanford University with her life made. She was all set up for a six-figure salary working at the foundation that bore the name of her well-to-do parents. But life was not, and is not, perfect for Chelsea Clinton because she had competition, not for her job, but for her mother’s attention. Seasoned Hillary Clinton critic and #1 New York Times bestselling author Ed Klein’s new book,Guilty as Sin: Uncovering New Evidence of Corruption and How Hillary Clinton and the Democrats Derailed the FBI Investigation, reveals exactly what Chelsea Clinton has to compete against: Huma Abedin.

Huma Abedin, more than anyone else, has been Hillary Clinton’s right-hand woman during her time at the State Department and her presidential campaign. The wife of disgraced deviant Anthony Weiner, Abedin is the woman at Hillary’s side, whispering in her ear, helping her into cars, and helping her plot her coronation.

Sources quoted in Guilty as Sin reveal just how deeply intertwined Huma Abedin is in Hillary Clinton’s daily life, and it is much more than Chelsea ever has been.

One friend commented, after spending the day with Hillary and Huma, “I thought at that moment, no wonder Chelsea’s jealous and suspicious of her mother’s relationship with Huma.”

What does Chelsea Clinton want? Is a six-figure income at a foundation with her name on the door not enough? No, it isn’t. “Having her mother in the White House will launch Chelsea’s career like nothing else,” a source revealed. “It will bring her millions of dollars in speaking fees and book contracts. It will give her a platform to run for public office.” That’s the Clinton way. Everything is aimed towards increasing power.

In the meantime, before she assumed office herself, Chelsea wanted to be her mother’s Valerie Jarrett, the senior adviser to President Obama. Unfortunately, her temperament does not fit the bill. Like her parents, she has a volcanic temper and her outrageous behavior at Hillary’s Brooklyn Campaign Office resulted in several staffers leaving to join Bernie Sanders campaign. Then, there was her lack of her father’s charisma, which was on display during a speech she gave tearing into Bernie Sander’s healthcare proposal. It was not well-received, even by fellow Democrats, who insisted that Chelsea be contained and taken off the campaign trail.

Chelsea Clinton fears Huma Abedin, her mother’s right-hand-woman, the woman who sleeps over and giggles with her mother, because, as a source close to the Clinton’s revealed, “Chelsea sees herself…as becoming the co-president.” Chelsea doesn’t want to be a substitute First Lady, playing hostess, she wants to be her mother’s chief political adviser, but she has some stiff competition to even get close to her mother.

Chelsea Clinton has faded from the campaign trail in recent weeks, and if her mother has anything to do with it, she won’t return to the public eye until Hillary’s coronation. Don’t expect to see Chelsea at Hillary’s side at events, whispering in her ear, fixing her hair, and helping her into cars. That’s Huma’s role, and Chelsea Clinton is afraid it is a role she will never be able to fill.

Guilty as Sin by Ed Klein is available in bookstores everywhere October 4.