Arthur Schaper
|
Posted: Feb 04, 2018 12:30 AM
Share   Tweet
The opinions expressed by columnists are their own and do not necessarily represent the views of Townhall.com. 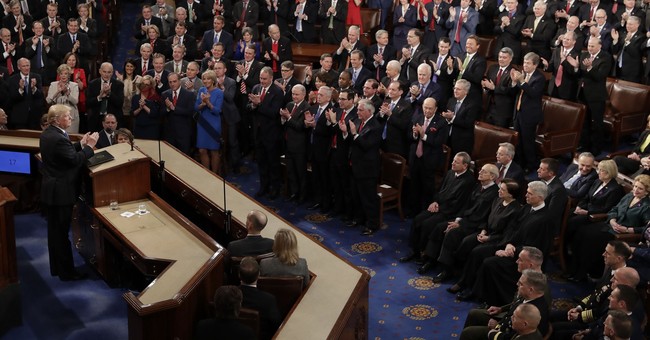 There are only two President addresses to the full Congress which I have listened to from beginning to end: President George W. Bush’s speech delivered in 2001 after the 9-11 terrorist attacks; and President Donald Trump’s first State of the Union address, delivered at the end of January this year. In 2001, I had just settled in for my third year at UC Irvine, serving as an office assistant at my college dorm. The 9-11 terrorist attack rattled everyone on campus and preoccupied us for the next two months, but we got through it and helped incoming freshmen move in for the academic year. 16 years later, after enduring the reigning failures of the Obama Administration, complete with acquiescence to terrorism and cronyism at home and abroad, I have never so vocally celebrated my President and couldn’t wait to watch his speech. Bear in mind that I haven’t taken much time to watch Trump’s other speeches.

The comparisons and contrasts between Bush 2001 and Trump 2017 are telling, indicative of where our country has been. Both Republican candidates were elected in disputed elections, since both lost the popular vote. Of course, no President has ever been elected by popular franchise, anyway. The rancor from the Left in both cases demonstrated the sheer lack of civic learning in the greater populace. Sadly, very little has changed in that respect.

The two Presidents recognized heroes or members of their families who attended as guests of honor. Both spoke of a unified country. Bush honored elected officials, including Pennsylvania Tom Ridge, whom he would appoint as the first Secretary of the Department of Homeland Security; and the Mayor and Governor of New York for the leadership following 9-11. President Trump honored a number of civilians and freedom fighters. The most celebrated moment in Trump’s speech focused on North Korean defector Ji Seong-ho. I cried when I saw him deftly raise up his crutches, a gesture of triumph against the forces of tyranny still lingering in our world.

President Bush had to comfort a nation healing from violent upheaval following the most devastating terrorist attack on our soil. Only twice before had the United States suffered a military invasion: The War of 1812, when the British invaded Washington DC and burned the White House; and World War II, when the Empire of Japan savaged Pearl Harbor. His audience included sympathetic heads of state as well as Lisa Beamer, the widow of one man who had tried to stop the Al-Qaida hostage takers on one of the planes. The leaders of both chambers of Congress oversaw the meeting, with (now disgraced) House Speaker Dennis Hastert and (now deceased) Senate Pro Tempore Robert Byrd.

President Trump engaged a nation recovering from eight years of sustained economic stagnation, moral and political decline, as well as international withdrawal. He touted incredible gains in moral and religious fervor, along with the upswing in manufacturing and energy production. While the Bush Administration focused predominantly on foreign affairs, Trump has refocused the federal government on domestic issues, attentive to the needs of American workers.

At the time, Bush’s speech was moving and reassuring. I thanked God every day that Al Gore was not our President. Despite the liberal tone at UCI, fellow students agreed with me, convinced that a Democratic commander-in-chief could not have weathered the political and international pressures following the devastating 9-11 attack. President Bush addressed an audience and a nation unified against terrorism and in pursuit of a strong and secure United States. His military efforts in Afghanistan and Iraq may have bogged down our military, but no one could question the truth that Bush kept us safe. President Trump’s First State of the Union was a resounding success, but was met with bitter disdain and outrage from a Democratic Party now in disarray, assailed as an anti-American, communistic cult. The staggering amount of disrespect from the minority party is just unfathomable to me. Some House Reps were playing Candy Crush on their smartphones while President Trump trumpeted an American renaissance built on renewed patriotism and honor.

While the President touted the record low unemployment for African-Americans and Hispanic Americans, the Black Caucus looked as though they were attending a funeral. In a sense, they were, for the Democratic Party, and specifically their record-holding dominance of the black vote for the last 50 years. Can anyone imagine Democrats in 2001 treating President Bush with such dishonor? They would have been savaged by the liberal media, especially since Bush 43 enjoyed unparalleled levels of popularity among voters for the next two years. The press would savage Bush for his misstatements in public or his lack of refinement at the podium, but nothing like the vitriol against President Trump today.

Both speeches are remarkable, despite the differing backgrounds leading to the events. These two Presidents demonstrated a clear resolve to protect the American people and preserve the values which make America great. They paid tribute and determined to fight for our liberties despite vocal, evil, and unstable forces around the world. It’s unfortunate that the fight against Islamic terror begun in 2001 has not come to an end, but I believe that President Trump will finish the job, taking on the cultural currents as well as the military aspects in due fashion. It’s also sad that one political party has strayed so far from representing American interests to pursue raw political power. Let’s hope that President Trump’s efforts for unity, in spite of partisan frustrations, will succeed.