Arthur Schaper
|
Posted: Oct 06, 2017 12:01 AM
Share   Tweet
The opinions expressed by columnists are their own and do not necessarily represent the views of Townhall.com. 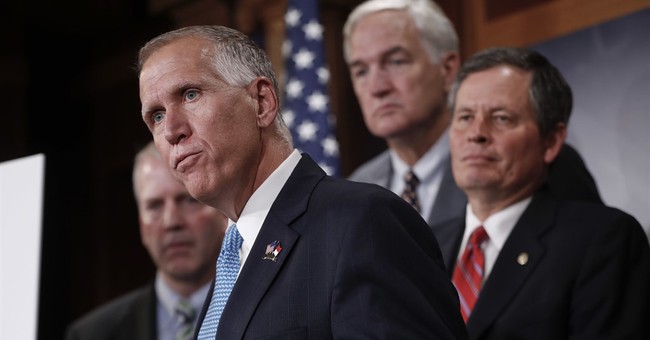 Congress has not repealed Obamacare. Can they succeed on tax reform? How about on immigration? The House of Representatives passed meaningful immigration-based legislation. From the U.S. Senate, David Perdue and Tom Cotton introduced the RAISE Act to put American workers first and limit immigration. Then there’s the SUCCEED Act from Sens. Thom Tillis, James Lankford, and Orrin Hatch. They are pitching this “conservative” plan to help illegal youth previously sheltered by DACA.

Tillis’s bill stresses a much longer pathway to citizenship for the illegals. The DACA recipients have to pay taxes, go to school or serve in the military. After ten years they receive permanent legal status. After 15 years, they become citizens.

Tillis and Company have announced that the SUCCEED Act has bipartisan support. Really?

Just because something is touted as “bipartisan” doesn’t mean that We the People want it. In California, Cap and Trade, gas tax hikes, and forced vaccination bills have passed with one or two votes from Republicans. Take your “bipartisan support” and shove it. Notice also that the SUCCEED Act sponsors left out immigration enforcement think-tanks. Jessica Vaughn of the Center for Immigration Studies has criticized the SUCCEED Act: “It is agreeing to an amnesty, without the U.S. gaining anything. It’s not moderating immigration in any way.”

Vaughn’s concern ties into the second problem with the SUCCEED Act: border security and deterrence. Will this legislation prevent another wave of illegal alien youths swarming our borders? Tillis tries to undercut this criticism: “The SUCCEED Act includes proactive measures that will help deter illegal immigration, including curtailing visa overstays, a major source of illegal immigration.” They want to tackle VISA overstays, but the most lethal illegal immigration issues take place at the border. We need the wall, tripled the border control and E-Verify! There is nothing in this legislation to assure that those measures come first.

What about chain migration? This bill targets the kids who are now all grown up. What about the parents, cousins, aunts, and all the other family members twice removed or related to the in-laws? The legislation will prevent chain migration, sponsorship for the illegal kids waiting for legal status following the conditional program. BUT … once the DACA kids go from conditional to legal status to fully naturalized citizenship, they can sponsor families, loved ones. Not good. After breaking the law as unauthorized migrants, they get away with the crime, and then they can bring in the family. Any discussions about having SUCCEED and RAISE together cannot work. Tillis’s bill naively ignores rampant DACA fraud, too. One estimate suggests that 40 percent of the DACA recipients shouldn’t have enrolled for the status to begin with. What about the children of these DACA kids, who are legal residents? We have another generation of “anchor babies,” and no action will be taken to remedy the abuses of the 14th Amendment.

But the SUCCEED Act proposal will create jobs, right? Tillis cites the Niskanen Center analysis of the SUCCEED Act: 117,000 new jobs, increased GDP by $81 billion, with a total federal revenue income of $22 billion over ten years. Of course, Amnesty Tom doesn’t mention the costs—and they will be considerable. By the way, the Niskansen center invests its resources in promoting environmentalism, immigration reform, and civil rights through libertarian principles. Huh?

And what about opinions from other immigration enforcement activists and groups?

Agnes Gibboney, the head of Parents of Murdered Children (her son Ronald de Silva was murdered by an illegal alien), seemed receptive to the legislation, until she learned that the DACA kids can sponsor their parents once they achieve citizenship: “I don't like that. In that case say NO to SUCCEED ACT and DACA.”

Robin Hvidston, Executive Director for We the People Rising slammed the senators’ attention to foreign nationals instead of American citizens: “Where is the US Foster Care SUCCEED Act? There are more than 600,000 veterans at this moment in need of medical care.  Where is their SUCCEED Act?”

Finally, Tim Lyng of The Remembrance Project shared: “Americans must be placed first.  Congress has not made an effort to assist American families who have been injured or whose loved ones were killed.”

By the way, the SUCCEED Act is not a conservative solution, since conservatism advocates for the rule of law, legal equity, national sovereignty, and protection of individual liberty and prosperity of citizens, free from the intervention of special interests from the state. I had an open mind, but not for an open borders proposal. The SUCCEED Act is another immigration “reform” failure. The U.S. senators would be better off doing nothing on immigration, and just allow the Executive Branch continue to enforce our immigration laws.