The Issa (and Blue State Republican) Dilemma: Stand Right or Get Left

Arthur Schaper
|
Posted: Mar 21, 2017 12:01 AM
Share   Tweet
The opinions expressed by columnists are their own and do not necessarily represent the views of Townhall.com. 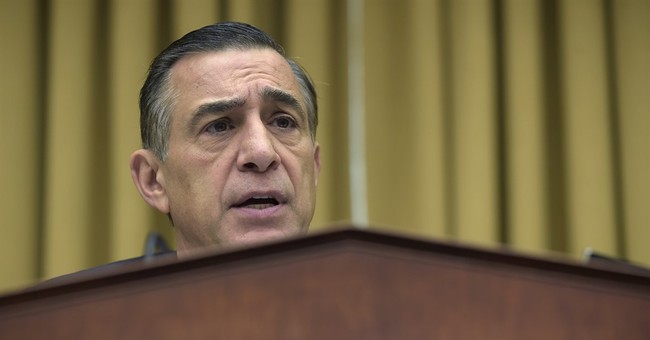 Congressman Darrell Issa (R-CA) faced the closest race of his career in 2016.

I was not completely surprised.

In 2013, one article polled public attitudes about the congressman, who had a net negative, just 43 percent. Issa’s standing with Republicans in general had wavered as well, since many people see him as more of an Establishment get-along/go-along type.

But all of that startling negative polling was just hot air, at least for that year. Election 2014 was beyond any kind of outlier that I had ever seen. The turnout was so low, that long-standing Democratic lawmakers like Lucille Roybal-Allard won with 58 percent of the vote—startlingly low considering her previous record of carrying away at least 70 percent of the vote in on and off years.

Once again, California got the dwindling end of presidential primary season. By May 3, the Republican primary was over, when U.S. Sen. Ted Cruz got flattened by Donald Trump in Indiana.

Already, Republican primary voter turnout was not looking good. It only got worse with the increasingly contentious Democratic Party primary. This was the worst thing that could have happened to the Republican Party of California, made worse by our new Prop 14 jungle primaries.

As for Congressman Darrell Issa, he topped out in his primary with just shy of 51 percent. Unheard of outcome, and very low. His close contender was relatively unknown Douglas Applegate with a striking 45 percent. The Democratic Party across the country went ballistic with joy! Imagine a prize trophy on their wall like Congressman Issa, the former House Committee Chairman for Government Oversight, now facing sudden extinction from Congress.

After all, he’s is a formidable power player in California politics. He was a kingmaker of sorts during the Election 2014 gubernatorial election, when he had deemed Tim Donnelly unfit to serve as governor following remarks about Republican contender Neel Kashkari and the former TARP manager’s comments about Sharia Law.

Not a smart move. Issa alienated conservatives then.

He also flirted with a version of a DREAM Act bill that year, when illegal immigration needs to be curbed in California, not accommodated. Bad idea, Darrell.

But it’s not like Issa has been all bad.

As ranking member of the Oversight Committee, he is the only congressman who stood up to Henry “Ratface” Waxman. Check out that video here.

During his final months as Oversight Chair, he investigated rampant voter fraud with the help of True the Vote. He also put IRS hatchet-woman Lois Lerner in the most precarious position in her career as he followed up on the horrific and malicious When ranking member Elijah Cummings wanted to throw a fit because Lerner kept pleading the Fifth (that means she was guilty, Eli!), Issa did not hesitate to take back control and shut down the hearing. All we got was “I’m tired of this” from the corrupt Democratic minority, but Issa never tired in his fight. Republicans even escorted him out of a hearing once because he was getting too involved.  But that’s the kind of Congressman we need representing We the People.

Then came 2016, and the closest race of his career. You know that your rep is a good guy when Kurt Schlichter gives him a special shout-out. After Election Day, Issa’s campaign and Orange County Republicans were sending out notices to other SoCal activists to ensure an accurate and acceptable voter tally, which lasted three weeks.

Issa won, thankfully, but the fight for the state and the conservative movement has only begun. Now, after the closest race of his career, the former gubernatorial candidate and Oversight Committee chairman is going left? At least that’s what the Orange County Register reported. Some of the chief comments from the article restated Issa’s changing, center-left views, including:

Oh brother, Darrell, do you really think that these little tacks to the left are going to bolster your re-election bid in 2018? And forget the argument that the president’s party tends to lose seats in off-year elections. In 1998, Republicans lost house seats (Clinton), and in 2002 Republicans gained seats under With Bush 43 as President! Following two years of Trump’s victories helping working people and Independent skeptics, Republicans will probably gain seats in the House (they are all but certain to gain 60 seats in the U.S. Senate!)

So, let’s get to the real reasons why Issa struggled this one time.

His support for Trump did hurt him in deep blue California, followed by an even bluer wave in 2016. That’s the biggest reason his final victory was so close. Trump is now president, so that won’t be an issue.  What other issues have hurt Issa? In the past, staffers never answered my phone calls to his office. Like other entrenched incumbents, he wasn’t making routine visits to the district, most likely because of his chairmanship.

The solution to Issa’s razor-thin situation is not tilting lift, but restoring constituent contacts and fighting for all Americans—as he has done in the past. The California Republican Party has embraced key aspects of the Trump Agenda by resolution (I know, because I seconded the resolution at the last convention).

Congressman Issa, you stood strong against the corrupt Obama Administration. You voted against fiscal cliff deals and the TARP bailout. Now is not the time to go center or left. It’s time to fight harder—just make sure to bring your constituents along for the ride.