Arthur Schaper
|
Posted: Mar 21, 2016 12:01 AM
Share   Tweet
The opinions expressed by columnists are their own and do not necessarily represent the views of Townhall.com. 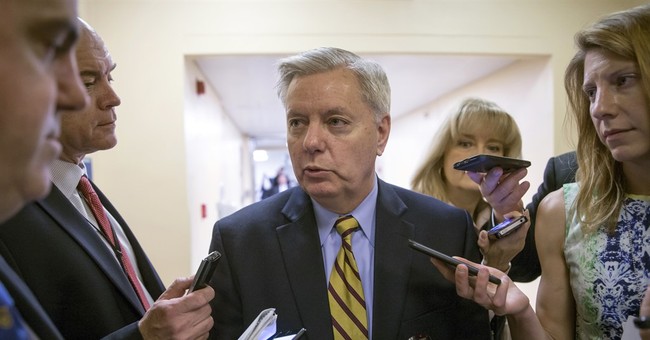 It’s the first day of spring in Southern California. And it’s cool and windy, with a shot of warmth from the sunlight. The weather has an unexpected fall or even winter touch to it. Nothing at all like what Californians were enduring for two years in a row. Unprecedented heatwaves in January 2014 and even throughout 2015 had everyone worrying about water rationing, water rates, and the rising costs of business. More Californians are waking up. El Nino has brought unprecedented rainfall the driest, largest (in terms of population) and one of the most liberal states in the union.

It’s still snowing in the mountains, and Los Angeles yuppies are snowboarding in Big Bear.

By extension, political pundits claim that hell is freezing over.

US Senator, former Presidential candidate, and self-proclaimed Chamber of Commerce Republican Lindsey Graham is supporting (not quite fully endorsing) his fellow (and somewhat former) adversary Ted Cruz. Graham had claimed that the Republican Party has gone bat-sh*t crazy. Now he has joined the madness. The South Carolina successor to Strom Thurmond even joked that anyone could shoot Ted Cruz on the floor of the US Senate, and no one would be able to convict him.

Fast forward two weeks, and the Crumbly S’more of Washington is fundraising for Cruz.

This is incredible. Every major Establishment power-broker, which is going broke and getting powdered for their decreasing influence in the Republican Party, has kowtowed to the “most despised man in the US Senate.”

For months, South Carolina Republican Sen. Lindsey Graham has been warning the nation about Texas Sen. Ted Cruz. But on Thursday, Graham told CNN that not only is he supporting Cruz, he's fundraising for him. Graham pointed to Donald Trump's rise as the reason, explaining that Cruz might be the only one to stop him. "I think he's the best alternative to beat Donald Trump. I'm going to help Ted in any way I can."

The Republican Party front-runner is a reality show TV star/real estate mogul who has espoused every liberal position (and three women). Now suddenly he is carrying the banner of Ronald Reagan. Yes, he took pictures with the Gipper during his administration, but Trump loves the photo-ops with the Clintons, and even donated money to nearly every Democrat under the sun. Even California Attorney General Korrupt Kamala Harris (who is running to replace Barbara Boxer in the US Senate).

It gets worse for the GOP status quo. Every insider puppet chosen to carry the mantle of George Bush (including his brother Jeb) has faltered at the hands of the Donald, and the hordes of angry voters ready to pitch the entire system in the abyss. Notice that the junior US Senator from Texas has not changed his views or his ideological leanings. Notice also that he has not apologized for his strong, stern stances on key issues, or for calling Senate Majority Leader a liar.

Let us never forget: Cruz never went to the Establishment. The Establishment went to Cruz, just like the embittered funeral director in “The Godfather” seeking justice went to Vito Corleone. Except that Ted Cruz doesn’t wait for mafia hits. He tells it like it is. And you won’t find a horse head in your bed the next day. Cruz did not even have to make an offer. Graham, and now Mitt Romney cannot refuse. They need Ted Cruz!

Another former Presidential candidate (without outsized, media-hyped aspirations two years ago) Chris Christie was right when he declared in his 2012 RNC Keynote speech: “Real leaders change polls, they don’t follow them.” Too bad the New Jersey Governor did not follow his own advice. At least Cruz did, and is cruising toward holding not just the Washington Cartel in Washington at bay, but also keeping in line the faux-conservative populism of Donald Trump.

I want a record, not just rhetoric. With Cruz, voters can get the best of the both worlds, but he needs to do more than declare how much better he is to “Le Grand Orange” (as my good friend from Torrance, Nathan Mintz, likes to call him).

Cruz’ appeal is growing. Moderates, powerbrokers, and the widening field of “NeverTrump” are stating to shout “Cruz and only Cruz”.

The numbers are daunting. Let’s be realistic. A brokered convention is more likely than a Cruz nomination, but both results exceed the outcome of a Trump nomination, and have slowed the would-be Trump coronation. Even Newt Gingrich got this wrong.

Hell is freezing over, and the devils are throwing snowballs at each other.

Not only that, but for the first time in recent memory, and my political involvement, California will be a competitive battleground state. Trump and Cruz will be fighting for delegates right here in the sunny (or will it be rainy?) Golden State.

The current illiberal, loony Governor Jerry Brown is so shaken by The Donald as potential GOP Nominee, he has threatened to help build the wall—one around California, of course, instead of along the southern border. Would that make me an illegal alien if I fled to Arizona? Sometimes I feel like one in my own state!

We’ve already seen hell freeze many times over this election cycle. Maybe Brown will choose Ted Cruz, too. He’s already turned over more power and favors to the La Raza lobby in Sacramento. Certainly he would consider supporting the first Hispanic to run for President and (possibly) win his political party’s nomination.

Wouldn’t he? Here come the snowballs!