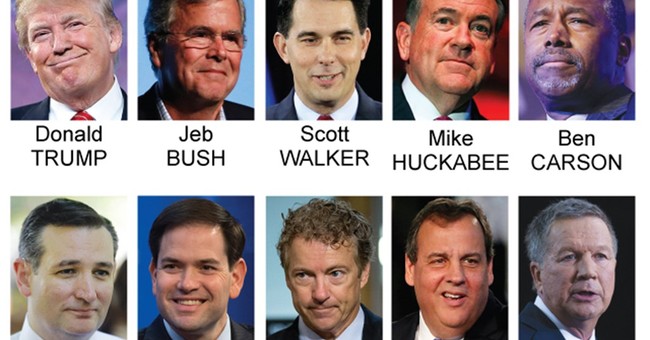 I am done with debates, talk, and rhetoric.

Really, I am. The Republican presidential candidates are entering their third forum on October 28th, and I am not sure I want to stick around and watch. The second set of debates was uninformative, out of control. The “Are You Kidding?!” table, with four candidates, still serves as the also-ran of debates. I did not bother to watch or read up on that one, even though my current No. 1 Bobby Jindal is relegated to that spot. Then I have to content myself with 11 – 11! – candidates battling for air (time) in the Ronald Reagan Presidential Library, with the Gipper’s Air Force One behind them, and CNN in front.

We need not just talkers, but walkers, and for the lack of a Walker, I find the current crop of presidential candidates a bunch of disappointing talkers by comparison. In contrast, more Americans are worked up by what they see going on in the world, and walking their talk. Californians fed up with high taxes and low opportunities have either run out of their state, or started waking up and walking toward their elected officials at the local level.

I guess Tip O’Neill provided us a good tip about politics. More of us conservatives, especially in California, have fessed up and faced the truth. We slip local control, all while complaining about the lack of conservative leadership in the White House and the US Congress.

Let us not forget our city councils, school boards, and other local offices.

If the ground game is weak, should we be surprised to see so much liberal disorder in our lives? How about we start taking care our own backyards for a change? Get vocal, win local, and then start making a difference at the state and federal levels. How quickly we have forgotten: a small band of rag-tag farmers fired “The Shot Heard Round the World.” Militia, poorly trained yet armed and ready, fought back, slogged away for seven years, and finally the British lost.

We can do the same once again.

Working with one key citizen activist group, We the People Rising, connected with outraged citizens throughout Southern California, I have witnessed city councils cower before angry legal residents, fed up with local politicians’ ignoring the law. If we will not have enforcement, then we will force our way into every meeting, and pressure elected officials into upholding their oath of office.

We the People Rising didn’t start picking on amnesty proponents just recently. They have been fighting this good fight for a long time. They shut down the Rep. Luis Gutierrez’ treasonous Executive Amnesty seminar at USC. They have scared openly gay open border advocate Ricardo Lara of Bell, CA. Lara, himself a victim now perpetrator of illegal immigration, forced them out of one of his public meetings, and they sued him right back! This group of activists crashed the Mexican consulate in the Inland Empire. Deciding that turnabout was fair play, We the People Rising demanded free food, rent, and health care from the Mexican Government, just as illegal aliens have abused California’s overgenerous welfare system for years.

Here is another group of walkers: The California Impact Republicans. Instead of Republicans yelling at each other, these feisty conservative brothers Aaron and George Park (of Placer County, the most Republican county in California), have joined forces with bloggers and local fundraisers to get Californians working together to take down the progressive juggernaut of culture destruction and economic stagnation. So, We the People Rising has risen to the occasion, and California Impact Republicans are making an impact. We are not just waiting for the next president, or the next election. We want order, action, and results right now. And we are getting them.

In the meantime, I have also learned how easy – and how much fun – it can be to put pressure on weak or wobbly politicians. They want votes, they want to be liked, and they don’t want anyone to think bad about them. So, I have issued this challenge to every 2016 US Senate candidate in California: when will you come to Huntington Park and demand that the rogue city council begin enforcing the law? One congressional candidate, Christopher Castillo, showed up.

What about the rest of them?

Real estate mogul and reality TV star (yes, and national media rodeo clown) Donald Trump has talked a good game about immigration: “I’m going to build a wall.” Great. “I will deport eleven million illegal aliens. They bring their crime and corruption.” Sure. That’s all nice and good, Donald. How about taking some time out of your hectic schedule and putting pressure on the Huntington Park, CA City Council?

He had the time to visit Nevada, and listen to the crowds love and adore him. One Hispanic woman ran to the stage and chanted about how much she loves Trump. Yes, I am well aware that many Hispanic-Americans aman the Donald. I know one of the personally: Raul Rodriguez of Apple Valley, whom The Washington Post interviewed following demonstrations of pro-enforcement and pro-amnesty crowds outside the GOP’s second debate in Simi Valley, CA. (Yeah, that second debate, the last one with Scott Walker, who failed to stand out, let alone compete, with ten other compelling contenders).

Former US Senator Rick Santorum thinks that immigrants should wait in line just as his father did. Why not come to California and make that case to the Chamber of Commerce? Bobby Jindal is below the margin of error. How about the Governor of Louisiana come to Huntington Park, and tell the immoral city councilmembers to do their job! Watch Jindal go from zero to well. . . not zero.

Enough with all the talk, Republican presidential contenders. It’s time for elected officials, and those seeking the highest office in the land, to put their feet on the ground and fight with us. If they want to win nationally, they need to help us locally.