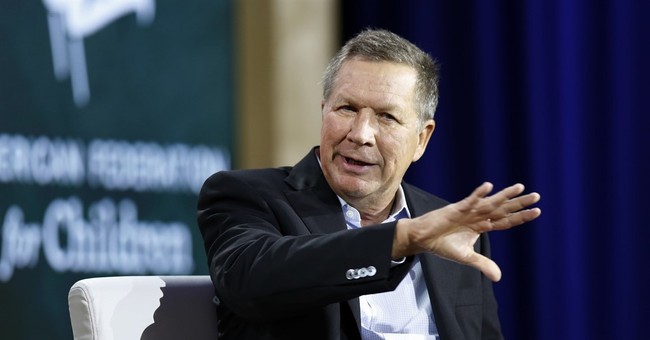 Ohio Governor John Kasich achieved some remarkable accomplishments as a Republican in a swing state. Unfortunately, much of what he is running on today undermines any good he did. A Republican’s Republican two decades ago, Kasich the Congressman and Presidential candidate was the fiscal watchdog outsider that never caught the national spirit in 2000. John McCain would soar on his real maverick roots, squeaking past George W. Bush, but felt the Rove crush in South Carolina. Like McCain, Kasich would have maintained a better following – and been a better President – if elected in 2000. That was not to be, and he is not to be this time around, either.

His second shot at the national limelight began in 2010, elected Ohio’s Governor during the Tea Party’s Great Awakening. He set to work balancing the state’s budget, cutting the spending and trimming the unwelcome leaven. He tried to out-Walker Scott Walker, and pushed for collective bargaining reforms including police officers and fire-fighters.

Sadly, he lost that fight. Timing is everything in politics, including necessary political reforms. Kasich’s decision to follow Walker’s Act 10 with his heavier spin ended a major effort which could have succeeded with better coordination, much like his first Presidential run in 1999. What would anyone expect trying to pick the same fight, with the international union hordes just a few states away? Walker caught the unions off guard, but they geared up quickly to squelch Kasich’s agenda.

Despite Kasich’s reelection by massive double-digits in 2014, conservatives confront Kasich on his heretical, illiberal policy decisions, specifically his Obamacare embrace, and take the “fool’s bet” Medicaid expansion. For the Ohio Governor, who has played the moderate card all too often, he still preaches the need for fiscal discipline, but his lumpy liberalism is showing forth, and should have knocked him out of consideration for the Election 2016 GOP nomination from the outset.

Taking on the Affordable Care Act, Kasich contends that the loaves and the fishes for a good life can come from the government. Then he argues that Common Core will improve education. Earlier this year, Texas Governor Greg Abbott excoriated Common Core, and proved that he was more educated about the topic, and would have schooled Kasich in the process.

Beyond that, Kasich celebrates amnesty and celebrates a guest worker program, citing the argument that “we” should do the most for the least among us. Did Kasich not get that joke from the Gipper? “The nine most dangerous words in the English language: ‘I’m from the government, and I’m here to help.” Help and charity are all well and good, but the Lord loves a cheerful (not a tearful) giver. The government has nothing to give, but merely takes from one and gives to another.

Nevertheless, the Buckeye Governor bucks conservative trends, and justifies his wholesale sellout to the Deity of Big Government with frequent references to God. “God has a plan for you! God bless you!” Kasich frequently intones during TV interviews. Right, a lot like “If you like your plan, you can keep it.” Tell that to the millions who have lost their insurance plans in this country. Kasich’s idolatry will lead to “If you like your liberty and security, you can keep them, too!” Ask the tens of millions who have been slaughtered by totalitarian governments throughout the world. The state with a sprinkled veneer of “Holy this and that” does not make it holy, no more than sitting in the White House makes one President (consider Barack Obama).

Even worse, Kasich played the “Hail Mary!” card to justify the Big Government “Hale-Bob” Kool-aid during the August 6th Fox News debate, too:

Never mind the theological fraud of this argument. Jesus provided a better answer during His earthly ministry:

“Render unto Caesar what is Caesar’s. And Render unto God what is God’s.”

In case you missed the subtext, it all belongs to Him, so stop trying to take it from others!

In the meantime, wouldn’t it be nice for politicians to stop robbing Peter to pay Paul? Government justifies taking from makers and making more takers. Would Kasich like to say “Thank you” to all the federal taxpayers who are subsidizing his now over-budget Medicaid expansion?

The fact that Kasich misuses the Bible to sanctify more government in our lives is particularly reprehensible. I don’t fear the devil whose horns I see, but the devil wearing Prada preaching Pravda, and Kasich fits that description all too well. Like a third-tier cable televangelist, a false prophet looking for easy profits with “Just send me $10, and we will pray your way to prosperity,” Kasich wants to sell “compassionate conservatism” without the conservatism. The Bible does teach that God’s heartbeat is for us to “proper and be in health, even as your soul prospers” (3 John 2). Soul prosperity matters more, and depends on walking in truth. Kasich’ Big Government social gospel has no truth.

To add insult to un-Biblical misery, Kasich even defended attending a “gay wedding”:

I’m an old-fashioned person here and I happen to believe in traditional marriage. But I’ve also said the court has ruled. … and I said we will accept it. And guess what, I just went to a wedding of a friend of mine who happens to be gay.

Kasich neglected another part of the Gospels: Male and female he created them.

Ordained minister Mike Huckabee gave the godly answer to this issue: “The Supreme Court is not the Supreme Being”. Neither is the government, whether pretending to provide healthcare, legal status, or education contrary to truth. Only a religious con would suggest otherwise, and John Kasich, like a wolf in sheep’s clothing, fits that unholy bill to a T.