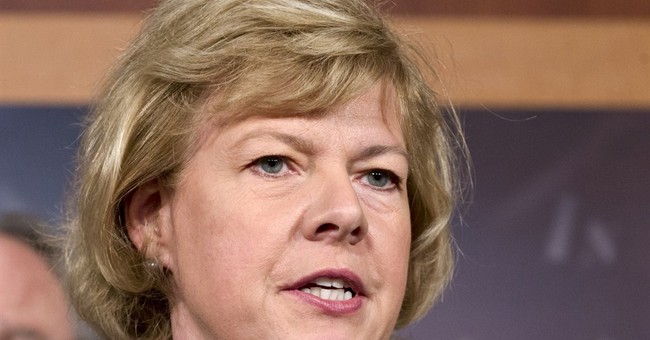 US Senator Tammy Baldwin (D-Wisconsin), the first openly homosexual member of the United States Senate, now has the dubious distinction of brazen foe of the First Amendment of the Constitution.

A Congresswoman from a left-wing Wisconsin district, she won her first statewide election in 2012, during the unexpected Obama GOTV wave, replacing retired liberal Democrat Helmut Kohl (of the Kohl clothier enterprise). Her strongly-backed conservative counterpart was former Wisconsin Governor Tommy Thompson, also a presidential candidate, but chiefly known as a successful welfare and education reformer.

Baldwin already has a record hostile to the Constitution. She once introduced a bill which would override state pro-life legislation (and thus, state sovereignty). Her record on freedom of speech and the First Amendment indicate a disturbing hostility to the First Amendment, one which not only Wisconsin residents should be aware of, but the national voting electorate and media conglomerates should be wary of. Baldwin has fallen into controversy a number of times in the local press, yet nothing has pressured her nationally yet.

Within a year of her first term, she ended up in troubled territory over a bungled termination of one of her staffers. Why? The office personnel in question had informed the junior US Senator about rampant abuses at a Veterans Administration hospital, yet the Senator sat on the reports and did nothing. When the staffer turned whistleblower, Baldwin fired her, then had to pay a severance settlement, including a non-disclosure clause.

At its core, Freedom of Speech is about holding leaders and legislators accountable, informing the public of the activities (legal or illicit) perpetrated by the state. When elected officials not only stifle information, but fire their subordinates for demanding action on pressing issues, voters should pay attention, demand transparency, but above all fidelity to the First Amendment, which protects freedom of speech in the public sphere. Consider a private sector example: celebrated finance guru Suze Orman sued her financial firm employer because a subordinate had mismanaged her funds. The company could not retaliate by terminating her. What gave US Senator Baldwin the notion she could arbitrarily remove someone for simply telling her to deal with VA abuses?

Baldwin also signed on with the short-lived Democratic majority in the US Senate last year, when 49 senators voted to gut the First Amendment with a vote for another amendment to repeal Citizens United.

The first version, introduced in 2013, outlined specific limits on campaign finance. Because of negative press, perhaps particularly from US Senator Ted Cruz (R-TX), the Democratic US Senators changed the text :

Section 1. To advance democratic self-government and political equality, and to protect the integrity of government and the electoral process, Congress and the States may regulate and set reasonable limits on the raising and spending of money by candidates and others to influence elections.

Legal jargon like “reasonable” invites unreasonable outcomes with illiberal judicial activism. Why is spending money in politics unreasonable in the first place? Elections are all about influence, and the answer to speech, whether bad or false, is more speech, not less.

`Section 2. Congress and the States shall have power to implement and enforce this article by appropriate legislation, and may distinguish between natural persons and corporations or other artificial entities created by law, including by prohibiting such entities from spending money to influence elections.

This Amendment would clearly override the Supreme Court Citizens United and McCutcheon decisions since they struck down those monetary limits as unconstitutional.

`Section 3. Nothing in this article shall be construed to grant Congress or the States the power to abridge the freedom of the press.'

The revision was deliberately vague, in contrast to the itemized powers which the Senate wished to accord itself. The added assurance that this amendment would not “abridge the freedom of the press” is specious at worst, vacuous at best. Any laws which abridge spending and investment inevitably limit freedom of speech and the press, petition and redress.

That Tammy Baldwin supported effort to redefine speech in America is destined to fail, at least this time, as a result of Republican opposition. But Americans and Wisconsinites ought to take notice. A major American party in the ‘world’s greatest deliberative body’ is pushing for a measure that the ACLU says would “lead directly to government censorship of political speech.”

Even the ACLU, a liberal legal advocacy group, criticized this amendment. Thankfully, Senate Resolution 19 failed in a cloture vote, but the fact that Democrats, including Senator Baldwin, cosponsored this First Amendment attacks is disconcerting.

Yet Baldwin’s redefinition of the First Amendment has continued un-abridged:

Recently, following the Obergefell v. Hodges decision, which imposed same-sex marriage on the country through a contorted reading the Fourteenth Amendment, Baldwin not only celebrated the ruling, but determined that religious objections under the First Amendment would not withstand scrutiny:

Certainly the First Amendment says that in institutions of faith that there is absolute power to, you know, to observe deeply held religious beliefs. But I don’t think it extends far beyond that. . . I think there are clear limits that have been set in other contexts and we ought to abide by those in this new context across America.

Justice Alito warned of this outcome in

I assume that those who cling to old beliefs will be able to whisper their thoughts in the recesses of their homes, but if they repeat those views in public, they will risk being labeled as bigots and treated as such by governments, employers, and schools.

Freedom of speech and religion mean nothing if individuals cannot exercise their rights in the public square, fettering the mind to close spaces and secluded institutions.

Baldwin should revisit the First Amendment, and Founding Father Thomas Jefferson’s Virginia Statute on Religious Freedom for a crash course on what the Framers intended and what the Constitution defines. If not, then Wisconsin voters, and national reporters, must hold Baldwin accountable with a full and free exercise of their First Amendment rights.
Jill Biden Campaigns for Terry McAuliffe: 'You Need Somebody That You Can Trust'
Landon Mion
Joe Manchin Has a Message for 'Self-Declared Independent Socialist' Bernie Sanders
Rebecca Downs
Bernie Sanders Says the Media is to Blame for Americans Not Knowing What is Included in Spending Plan
Landon Mion
There's Already Fallout from the Release of Drafted Materials from Biden's Commission on Supreme Court