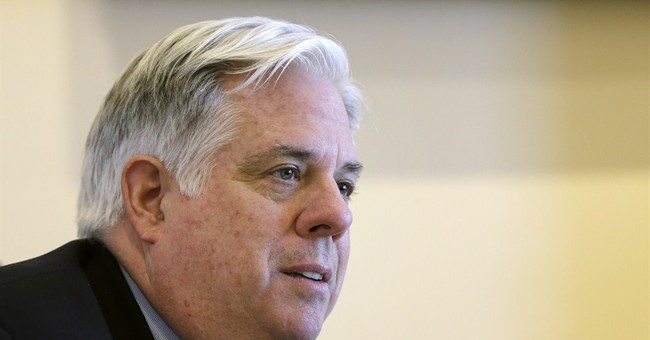 Maryland, nicknamed the Old Line State, was often the main battlefield of pivotal Civil War conflicts, including the bloodiest day of battle: Antietam. Maryland was the home and developing ground of Republican abolitionist Frederick Douglass, yet seats the dysfunctional, widely loathed federal capital. From Mason-Dixon to Baltimore riots, Maryland would hardly qualify as a merry land today, but for one man and his conservative political team effort to restore his state.

Larry Hogan, the son of former Congressman Lawrence Hogan (who voted to have Richard Nixon impeached following his connections to the Watergate cover-up), coalesced with Marylanders frustrated with tax-and-spend, regulate-frustrate Annapolis. They started Change Maryland, and they have started changing Maryland, with Hogan at the helm.

Three months ago, I contacted the Maryland GOP headquarters for more information, including confirmation about a key tax cut. Happily obliging to trumpet the success of one of their own, I wrote about Hogan’s “Unsung Hero” status.

Today, I write to inform conservatives nation-wide that Hogan’s victory then is building momentum, and then some.

Unlike New Jersey Governor Chris Christie (whom Hogan invited to his 2015 inaugural), Hogan has been a team player from Day One. Catch an extended glimpse of his ease as well as strong character to share his victories with his staff in this clip following his first one hundred days in office.

Media savvy without being servile or selfish, Hogan was blunt about Maryland’s fiscal and governmental dysfunction in his first State of the State address. “Marylanders are among the nation’s most hardest working and most educated people”, Hogan announced to the General Assembly. He then indicted the high taxation, spending, and regulations hurting businesses and pushing residents out of the state.

He stated one litmus test for his new agenda:

“Will this law or action make it easier for families and small businesses to stay in Maryland?”

He intended to balance the state’s budgets and shore up the flagging pension system without raising taxes. And he did it.

In fact, unlike his two-term Democratic predecessor Martin O’Malley (now a single-digit also-ran running for the 2016 Democratic Party nomination), Hogan is rolling back taxes and fees, seeking to make government work for Marylanders rather than working them over. Indeed, he repealed the universally hated rain tax. Marylanders visiting Torrance, CA told me how much they hated that levy, and were thrilled to learn of its repeal.

About public transportation, Hogan drew a red line on public spending, and killed a proposed Red Line. Regarding another rail line, Purple, Hogan studied hard and bargained harder, ensuring that the two counties which would benefit, would shoulder a greater part of the cost, and include private sector input to trim an already slimmed down budget projection.

He cut all state departments by two percent, but increased funding for K-12 and higher education.

In a smart yet simple business move to curry favor with constituents and invite tourism and commerce, Hogan signed off on lower tolls and fees to come into effect on July 1, for bridges and toll roads throughout the state. This reductions to travel levies throughout the state will help commuters, taxpayers, and tourists enjoy their lives. Local media have conceded that their Republican governor is making all the right decisions.

On education, Hogan and his Lieutenant Governor Boyd Rutherford presented a planned, expansive, freedom-based set of proposals. The legislature watered down most of them, but Hogan signed off on modest progress in the final bill.

Military retirees will get a $10,000 tax credit, a step in the right direction to ensure that Marylanders stay in Maryland.

Even the negative press against Hogan turns out to his favor One letter to the Baltimore Sun even identified Hogan as “Maryland’s Scott Walker”. Despite the letter’s negative tinge, Hogan actually comes out stron:

. . . Gov. Larry Hogan's only purpose in proposing tax breaks on military pensions was an effort to divide a normally cohesive bloc of voters.

On the contrary, honoring those who gave their lives for this country is more than good politics. It’s good statesmanship.

His proposal involves the exemption that allows charter schools to hire non-union teachers who are not state certified. . each local school district would be required to turn over to private institutions 98 percent of what they spend per pupil.

Do teachers really need all the bureaucratic back-and-forth to establish themselves as good educators?

Governor Hogan appears to be just like Govs. Sam Brownback of Kansas and Scott Walker of Wisconsin and former Gov. Tom Corbett of Pennsylvania.

Walker and Brownback won reelection in 2014 following severe tax and spending cuts plus necessary reforms in their home states. Corbett didn’t walk the walk, and lost. First lesson: do right by the taxpayer, then stand your ground. Another difference between Hogan and his counterparts? The Maryland Governor accomplished his achievements despite a stiff, recalcitrant, status quo Democratic legislature.

Not only that, but the first-term political neophyte summoned up calm, courage, and resolve during the intense Baltimore riots. Respecting local authority until the last minute, Hogan took charge, announced a state of emergency, and declared “Criminal activity will not be tolerated.” He got national press for his leadership, and justly so.

A rising figure in the Republican Party as well as Maryland, Hogan is reaching out to African-American communities and helping his conservative peers make stronger strides in future elections.

A Serious illness? Yes. Is he serious about fighting it? No question about it.

A day after his diagnosis announcement, Hogan is feeling great. On his Facebook page, sitting with his lovely wife and daughter standing on his side, he declared that he is still working while recuperating and healing.

Get well soon, Governor Hogan. Maryland needs you. This country also needs your bold example that conservatives can fight back in blue states and restore law and order, financial peace and prosperity.