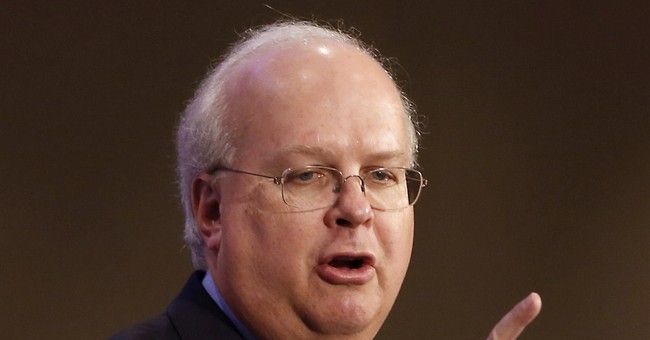 During a Monday interview with Fox News’ David Webb, Fox News contributor Karl Rove walked back his Fathers’ Day comments in which he said “violence involving guns” is not going away “until somebody gets enough oomph to repeal the Second Amendment.”

Oh brother. The full context of the transcript could not be clearer. Rove never believed nor advocated for the removal of the Second Amendment.

Yet Hawkins continues to push the “Rove the Gun-Grabber” narrative. First, Hawkins reprints Rove’s “exact words (and Hawkins makes sure that the reader sees “exact words” exactly). He then finishes the quote with Rove’s own statement: “I don’t think it’s [repealing the Second Amendment] is an answer.”

Exactly. Rove's exact words never suggested "get rid of the right to bear arms." Another issue: even if some of the comments are Rove’s “exact words," they are not all of his words. The context has been removed and the points which he had made before and would make afterward have been taken away, too.

This practice of selective quotations is turning into journalistic malpractice.

Although Rove made these comments during an appearance on Fox News Sunday, a video of the comments was never posted by Fox News. Other videos from that show were posted, but not Rove’s comments on the Second Amendment.

So? Fox News does not broadcast every individual segment of every statement or conversation from the news panel. Can we move on, please?

With the backlash against the comments growing, Rove appeared with Webb the next day to address the situation.

There indeed was a backlash, against the notion that Rove was roving to take guns away. Not just this author, but Stephen “Louder with” Crowder blasted this distortion. Still, some media operations are patting themselves on the back every time they force someone, anyone to "explain" or retract their statements. Granted, holding media accountable for false, misleading, or inaccurate information is essential. Media need a watchdog as much as any public institution. Now, media must include the conservative blogs and newspapers, too.

Still, Hawkins claims that Rove "walked back" his comments.

What did he actually say in response to challenges and concerns about his stance on the second Amendment?

People always in moments like this, some politicians look for magic answers. And I don’t think this is an answer, as I said. I went on to describe what I think we ought to be focused on now, which is, we had warning signs from this young man. He talked to friends about it, he talked to other individuals about it. He went on the internet and openly explained what he was going to do and somehow or another we missed those signs.

Rove had already said, and affirmed what he has said. Nothing to walk back or retract.

Then Rove repeated himself in exacting clarity:

As I said… On Fox News Sunday, this is not an answer.

"As I said. . .as I said." This is not walking back, but rather standing your ground (no pun intended).

Honestly, I now have more respect for "Establishment" Rove for not caving to (right-wing) media pressure on their misunderstanding.

If New Media is going to descend into the same old "Old Media" smears and distortions, I am this close to "Going Establishment." I do not believe that Andrew Breitbart intended for his media efforts to turn into right-wing propaganda or water-carrying for outlier conservatives who have no other interest but to rail against power and authority. These attacks against Rove are becoming unbearable. If the democratization of the media is all about bringing down people in power in an unscrupulous fashion, then what is the point of news reporting? We might as well go back to relying on the neighborhood gossips and their petty, personal spin on issues.

Better yet, why not crack open the ancient fables and legends of Greek Mythology? At least there was no attempt from the poets of antiquity to give a minute-by-minute truthful account of events, as much as to justify communal and cultural ideals.

Right-wing, pro-liberty, anti-liberal bias reporting is a boon, blessing, and yes God-send. Now it's time for reporters to look at reporting the truth, not just trumpeting a right-wing narrative which also flies in the face of the truth.

The New Media should be the True Media, exposing government corruption and collusion, and also exposing media connections with promoting both, as has occurred numerous times. I think that's what Breitbart wanted, and his legacy should reflect that.