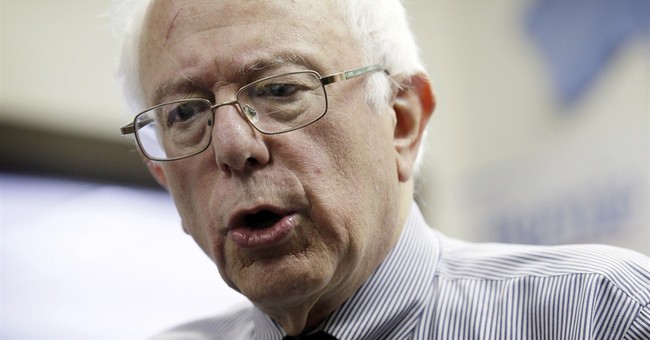 My first article for Townhall.com targeted left-wing online magazine Slate for dressing up Election 2014 Republican wins as subtle left-wing victories. While the column claimed that Republicans had adopted liberal views on key issues, the fact is that many Republicans, whether winning federal or state office, pointed out (effectively) that liberal, Democratic, “progressive” politicians and their policies were not just creating, but exacerbating, the problems of wage inequality, overregulation for the benefit of the few at the expense of the rest of us, and the prosperity of Big Labor, Business, and other special interests against the General Welfare, Main Street, and the Little Guy.

This past week, Slate Magazine published another intriguing attack, but this time against the left-wing Grandfather wowing crowds and wooing Hillary supporters: Democratic socialist Bernie Sanders. An anti-capital populist who decries the Koch Brothers, hates big money in politics (even though he raised $1 million in the first twenty-four hours of his campaign), Sanders wants Social Security and Medicare for everyone. He wants to break up Big Banks and end business as usual in Washington aiding Big Business. And he is a staunch supporter of the Second Amendment. This revelation triggered my interest. A left-wing candidate with a right-wing voting record?

Sanders, an economic populist and middle-class pugilist, doesn’t talk much about guns on the campaign trail. But his voting record paints the picture of a legislator who is both skeptical of gun control and invested in the interests of gun owners—and manufacturers.

Sanders opposes gun control? He respects gun owners and their makers? Bang. “Feel the Bern” has now turned into in the flaming wounds of gunshot victims.

Sterns’ article then details that as Independent Congress from Vermont, Sanders voted against the 1993 Brady Act. As US Senator, he voted to allow Amtrak passengers to pack heat in their carry-on language (have concealed-carry, will travel). He also voted to block funding for any foreign organization which registers or taxes gun owners. Sanders campaign may play out very well (better than Hillary) in gun-grabbing Connecticut, where 300,000 gun owners faced felony charges for failure to register their firearms, or in Clinton’s deep-blue New York, where Governor Andrew Cuomo attempted to impose a gun registry.

OnTheIssues.org lists Sanders’ numerous pro-gun ownership votes, including a successful tort reform measure to block lawsuits against gun manufactures, i. e. the Protection of Lawful Commerce in Arms Act. Strangely enough, Sanders received an “F” rating from the National Rifle Association. Liberal elements are still asking about that one.

How has the Vermont Senator’s gun stance affected his campaign so far?

CNN and Politico indicate that Senator Sanders is gun shy about discussing the Second Amendment. The Boston Globe claims that Sanders has a “lighter touch” on gun control.

"This senseless violence fills me with outrage, disgust and a deep, deep sadness," Sanders tweeted. In a longer statement, the Democratic presidential contender said the killings, which were blamed on a white suspect whose victims included state Sen. Clementa Pinckney (D), showed that the U.S. had a long way to go in escaping its history of racial violence.

"The hateful killing of nine people praying inside a church is a horrific reminder that, while we have made significant progress in advancing civil rights in this country, we are far from eradicating racism," he said.

"Our thoughts and prayers are with the families and their congregation," Sanders added.

Discussions against race and racial violence, but not one statement about gun control. Then he held a large rally near a Charleston prayer vigil. Ouch!

What can we derive from this debate within the Democratic Party and throughout the country?

Already divided on trade, and to a lesser extent on marriage, the gun issue is shooting up the Democratic Party rank-and-file. Even in liberal Rhode Island, the most Democratic state in the Union, the firearms community commands considerable influence, and pushes back against gun-grabbing and gun control legislation year after year.

Furthermore, the National Rifle Association remains not just informative but influential, and with the rising crime rates in Democratic, despotic urban communities, more citizens recognize that Wayne LaPierre was on target when he fired back at Second Amendment critics: “The best defense against a bad guy with a gun is a good guy with a gun”.

With this gun element exposed about Sanders (The New Republicpooh-poohed his illicit-explicit rants from 1972), left-wing activists are taking shots at Senator and Presidential contender Sanders. For Stern, the sorest pro-gun vote aims at PLCAA, a Republican and conservative (aka right-wing) talking point not just on gun ownership, but tort reform. Stern goads the US Senator on this issue, while trying to bolster Hillary Clinton’s now-flagging campaign:

Several liberal congressional representatives have recently spoken out against the PLCAA, and if Democrats retake both houses of Congress, they may make repealing the law a priority. Hillary Clinton, who voted against the act as a senator, would almost certainly sign a repeal bill. Would a President Bernie Sanders? Until he says otherwise, we have every reason to believe the ostensible progressive hero would stand behind the vile legislation he championed just a decade ago.

Hillary would repeal PLCAA, Stern claims. Really? With the might of the NRA derailing Obama’s repeated gun control measures and exposing his unconstitutional executive orders, will any Democratic candidate dare take on the NRA?

Not even Sanders dares shoot back at the firearms community. Weekend at Bernie’s has turned into another circular firing squad within the Democratic Party, and left-leaning elements are targeting Sanders for his staunch stance in favor of firearms. Will his record on gun rights blow a big hole in his campaign? Not just Sanders’ run for the White House, but the entire slate of prospective Democratic contenders will be shooting at each other to augment their credentials on gun control, only to shoot themselves in the foot for the general election in 2016.