Armstrong Williams
|
Posted: Aug 30, 2018 12:01 AM
Share   Tweet
The opinions expressed by columnists are their own and do not necessarily represent the views of Townhall.com. 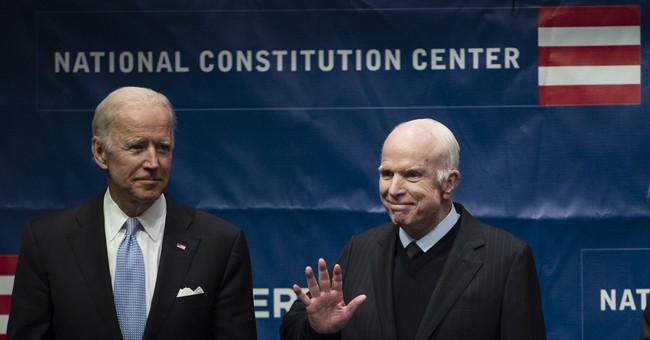 With both mourning and praise, it is proper and fitting to honor the passing of the revered statesman and longtime Senator from Arizona, John McCain. Here in his final earthly state lies a maverick -- not merely a maverick among the heroes of fighter pilots and the halls of government, but a maverick of soul, of duty to country, of the better angels of American greatness.

McCain was not a man easily given over to quick wins. As a prisoner of war, he endured years of torture in enemy camps before returning, injured but alive, proud and triumphant. That is why it should come as no surprise when he proved to be the last line of resistance against President Donald Trump's attempt to get a "quick win" on repealing and replacing Obamacare in time for Congress's summer recess. McCain stood before his Senate colleagues last year to deliver a classic speech on bipartisanship and parliamentary procedure. While casually mentioning his own existential health struggles, with the bland understatement, "I look a little worse for the wear," McCain displayed fortitude and valor that one rarely sees in Washington.

The effort to repeal and replace Obamacare -- a central tenet of not just the president's agenda but the entire GOP platform -- would have seemed to be an exceedingly low bar for the White House and Senate Republicans to clear. After the GOP leadership in the Senate shifted parliamentary rules to achieve the confirmation of Neil Gorsuch to the Supreme Court earlier that year, the Senate still could not reach a broad consensus. Despite the usual cajoling, the threats and sweeteners, McCain saw a more fundamental principal at stake than partisan advancement.

Not that political considerations held no sway over the matter. McCain's valiant stand was aided in part by the blowback the president received from his attempt to publicly disgrace his own attorney general, Jeff Sessions. Sessions' agreement to recuse himself from the Russia investigation because of possible conflicts of interest received little opposition from the president at the time, because he apparently believed that firing General Mike Flynn and distancing the AG would be enough to put to bed controversy over possibly improper relationships with the Russian government during the 2016 presidential election.

It is not as if McCain, the elder statesman, and Trump, the insurgent president, did not have a history of antagonism. Trump famously insulted McCain early in his campaign, rejecting his war hero status in a petty and unnecessarily low blow. In a maneuver resembling the OODA loops he rehearsed endlessly as a fighter pilot and employed adroitly in his political career of 50-plus years, the captive turned the table on the captor. McCain got what many believe to be a justifiable comeuppance by ceremoniously and conspicuously obstructing the president's rushed agenda on health care. He also won a reprieve for the GOP to get its ducks in order and put together a winning strategy on health care. It is one thing to be obstructionist when the other side has the ball, but quite another to advance an agenda when it's your turn to govern.

In curbing the path to political expediency, McCain reminded our nation that in this time of extreme partisanship and rancor, we are failing to live up to our most cherished ideals. McCain's position on Obamacare was unknown. He has been a vociferous critic of the legislation's failures, including the parliamentary sleights of hand Democrats used to force its passage (primarily mischaracterizing the individual mandate as a 'penalty' and not a 'tax'). He also railed against the sudden balloon in premiums for enrollees, which was the result of faulty enrollment assumptions by the bill's architects.

McCain was certainly no fan of Obamacare. But he was a fan of our democracy. His 30 years of service in the Senate, and before that his service as a naval aviator and war hero, earned him gravitas to critique the process by which the government pursued the attempted overhaul. Congress and the president tried to repeal the Obamacare on the cheap. The states, including GOP-led states, that had come to rely on the Medicaid expansion would have suffered. GOP governors in those states would have paid a high political price were the expansion removed without an adequate replacement. Moreover, the upside -- an early win for the president in his first year -- could not have compensated for the political fallout that might have beset the party.

Putting party politics aside for the moment, let us consider the effect of radically altering the health care environment of the American people. By CBO estimates, the various Republican plans would have removed coverage for between 22 million and 30 million Americans. That is not what we wanted as a nation. We want a situation in which Americans are healthy and productive, while enjoying a health care system that is robust and fiscally sound.

That, as McCain rightly chided us, is going to require work. The arcane and deliberative rules of the Senate were designed by the Constitution's framers to force broad consensus and incremental change. We are not a kingship, but a republic that stands united or falls in division. That is the grand bargain we struck when we declared ourselves a free people, and threw off the autocratic rule of the England's monarchy. By design, achieving the goal of democratic rule by, of and for the people requires more than the stroke of a pen or an executive order. We win as an American republic when we faithfully observe the democratic process.

McCain was a life-long champion of the American people. He dedicated and sacrificed his life and career to public service. There is no doubting his purity of thought and intention. By sending us back to the drawing board on Obamacare, he forced us to come to grips with our shared destiny as Americans. In taking a stand for principle over politics, John McCain performed perhaps his most valiant act of public service.