Our Day in Flint

Armstrong Williams
|
Posted: Mar 19, 2016 12:01 AM
Share   Tweet
The opinions expressed by columnists are their own and do not necessarily represent the views of Townhall.com. 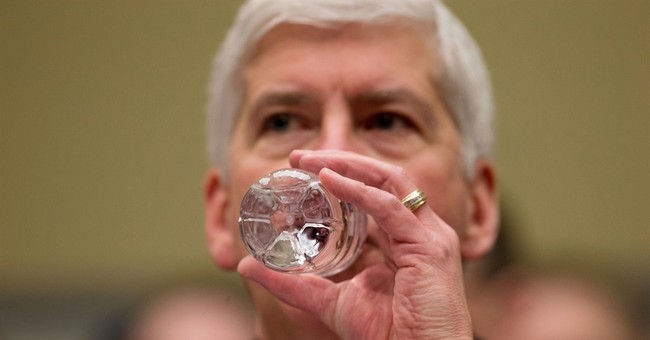 As the proud owner of NBC 25 in Flint, Michigan, it is important for us to understand the community and to become a part of it as much as we can. As a station owner, we have the ability to elevate the needs and concerns of the downtrodden, hold those in power accountable and showcase the resilience of Flint, and it's a responsibility that we don't take lightly.

We read about the water crisis facing Flint and the failure of the people in power and was appalled. It was the failure of government that abandoned the most vulnerable, leaving them with many unanswered questions. I even added my perspective on the crisis here. But that wasn't enough, I wanted to feel the emotions on the ground, to understand the crisis through first-hand experience because too often in reporting, the people are ignored for political spin. And after our day in Flint, we can tell you that the personal resilience of the people of Flint is highly under reported.

When we first arrived on Monday morning February 29, we went straight to city hall where many were there in search of answers. It was at the 'counter for free water filters' that we met a young single mother, (who is also a student) and her young daughter. The mother relayed to us a story about how her daughter had elevated levels of lead. She was at a lost for what to do, but she knew she had to get the water filters for her daughter. She was worried about her daughters future, what it would look like, and what could she do as a mother to improve her daughter's chances? We had no answers, but we did have empathy, and we genuinely cared, and it was obvious that the mother appreciated that someone wanted to hear her story. My heart goes out to her and her daughter, and reminded me that this is not a temporary crisis, but one who's effect will reverberate throughout Flint for a generation if not more.

City hall was littered with people who wanted their stories heard. There were women there who had done their own research into the crisis and dug up documents that proved officials knew about the dangers of the lead levels long before the public. All of the people we met in city hall wanted answers, but more importantly, they were there to try as best as they knew how to help the community they love. This is how we started to love the people of Flint.

From city hall, we went to a firehouse where the national guard was stationed handing out clean water to residents. The men and women of the national guard were standing outside on a cold, damp day handing out cases and cases of water to anyone who drove up. They did not complain about the weather, or the heavy lifting, or about being on their feet all day. They were there for the community. We watched and even participated in loading the water into cars. We spoke to as many of the drivers as possible. We wanted to hear their stories. Most came daily to pick up multiple cases of water. Many had children who they worried about; most did not have the money to move away. It was after speaking to so many drivers that we came to understand why the national guard did not complain about being outside in the freezing cold-- they were the lucky ones.

After spending time with people at the firehouse, we wanted to see first hand the living conditions of the city, where 40% of the population lives below the poverty line. It was there that we saw what seemed like abandoned houses on every block. A couple of people welcomed our team into their homes. There we heard and saw firsthand what it was like not to be able to take hot baths, or drink water from the tap. We saw cases upon cases of water stacked up everywhere the eye could see. We heard tales about how it took hours to fill up baths with enough clean hot water so they could clean themselves. A hot bath, something we take for granted, was so precious to them. They also relayed to us how many of their neighbors did not own cars, so they could not go to the fire stations to pick up the water. Instead, the community pitched in. Those with cars drove those without cars, or just picked up a couple of extra cases for the elderly or infirmed.

After witnessing the strength of the people, we headed to a town hall my WEYI NBC25 Flint station was hosting. We had elected officials, doctors, and professors all gathered to talk with the community about the water crisis. The goal was to bring together the community so the citizens could have their voices heard and so the people could learn what they could do to help. So many of the people we encountered wanted to help but were unable to due to lack of guidance and a lack of answers about what would actually help.

At the town hall, the passion surrounding the crisis was evident. The auditorium was nearly packed and from the first question, it was evident that the residents were sick of excuses and wanted to action. There was blame enough to go around but instead of blame the citizens wanted answers. The time for political buck-passing was over, the time for answers was now. There were a couple of occasions where emotions rose to a fevered pitched and for good reasons. After being in Flint for nearly twelve hours digging into the issue, I found myself getting upset. I saw the pain and suffering they were enduring, and at the town hall, I experienced the hopelessness they felt. No one had answers. No one told us when the crisis would be resolved, how the city was going to deal with the long-term health issues when they would be able to drink the water when the pipes were going to be replaced.

The hour and a half town hall allowed us to hear every side of the issue. When we walked in we expected we would have a better feeling about the crisis facing the residents, but sadly we felt worse. There was nothing we could do at the moment to help, other than listen to the citizens and give them a platform. But we could not change the pipes, we couldn't fix all of their problems and no one on the stage could either.

The people of Flint deserve better. The elected officials need to stop seeking blame and start seeking solutions. They need to act now because the people of Flint cannot wait any longer. The government failed them when it created the crisis and is failing now with their lack of response.

After we left the town hall, we came to one conclusion—the people of Flint are resilient, their elected officials are not, but that isn't stopping the citizens of Flint from trying to save their community.