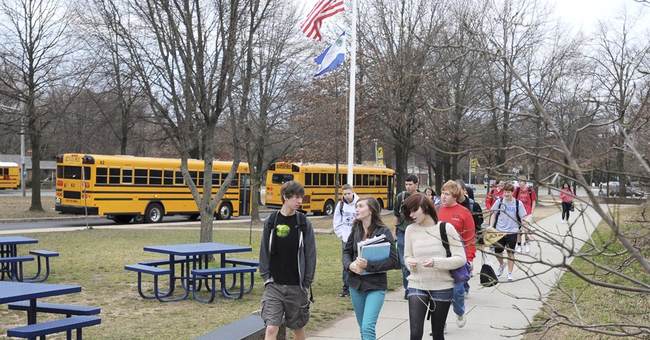 There is very little meaning in things simply given away. America’s public education system has become the quintessence of that idea -- a “free” system that produces unprepared and overly entitled youths ill-equipped to advance America's future.

High-minded progressives see public education as something to be protected from private competition and the ravages of more innovative systems at home and abroad.

I spared teachers from my ire of my last column, but they are not without fault. For the most part, though, teachers are superseded by education reformers, especially on the right.

In public education, teachers are rarely specialists in their fields unless teaching is their second career. Typically, mathematicians do not teach trigonometry, nor do those with English degrees teach high school English. The vast majority of teachers are education majors with a subject matter certification.

An education degree confirms general knowledge of a broad range of topics. Thus the first page of Google hits for "biology" combined along with an informative Wikipedia article on the subject probably hold more knowledge than a typical high school biology teacher.

Furthermore, since public education teaching isn't very lucrative, the field is often occupied by low-quality teachers educated at inferior schools. After all, very few people would pay more money for schooling, earn less, and put up with all the garbage facing teachers these days if they could make big bucks as a computer programmer, lawyer, doctor, or venture capitalist?

Of course, there are plenty of smart, qualified, and exceptional teachers; but there is no denying the education brain drain is subject to higher earning potential in other fields.

Qualifier aside, the result of inadequately prepared educators is that the smart kids tend to go unchallenged and get bored, in turn they become a disruption and many are inadvertently tossed into the dustbin of “what might have been.”

So the generalist enters the unruly classroom focused on maintaining order and catering to less motivated kids over those with true potential. The teaching itself is geared toward learning how to answer standardized test questions over developing children’s understanding of the how and why.

And no longer is discipline taught or enforced in the classroom -- it's largely been replaced by an elaborate system of bribes designed to keep students busy. Down the road, businesses must offer more and more incentives beyond a paycheck to keep employees motivated for the most basic tasks.

No wonder our children are falling behind.

Another problem is the evolving purpose of high school. No longer does it aim to produce literate, informed, and productive citizens -- citizens who want to advance American ideals they learned about in school and don't necessarily feel entitled to six-figure jobs.

Instead, high school ushers kids towards the end goal of college. At some point college became a holy grail, a right, and the only way to succeed in America.

Vocational programs across the country have been derided, their budgets slashed. Rather, kids who struggle to understand calculus and can barely read go on to college and flunk out, having never learned a skill that can actually pay the bills.

The college-or-bust crowd largely looks down on blue-collar jobs, when in fact they're often the best path to a good, sometimes great living -- without all the debt and misery so many college grads encounter today. All you need to do is look around at the successful electricians, plumbers, mechanics, and lawn care experts to realize this fact.

Around the world, better public school systems regularly channel children into careers where they show an aptitude and can find success. This does not mean stifling career choice, but it does require us to admit that not all children need the same education. Instead, kids are funneled into subjects that meet their passions and abilities.

When you look around and talk to successful people, you will find that the overwhelming majority found the specialty best suited to their abilities. They were able to pursue their dreams with passion and confidence. Talk to the average college graduate, and most will be flummoxed to tell you exactly what they want to do, much less how to get there.

Our children face obstacles in their paths to success at every turn. Most political speeches on education reform in America lead to nothing but more ground ceded to the rest of the world. Each parent that insists their child is an angel and should be passed despite never doing homework is dooming future generations of Americans through entitlement and low achievement.

We watch as America burns from the ground up, focused on bullying and self-esteem over knowledge, achievement, and success. Acceptance of the status quo only hastens the decline of America and its children.