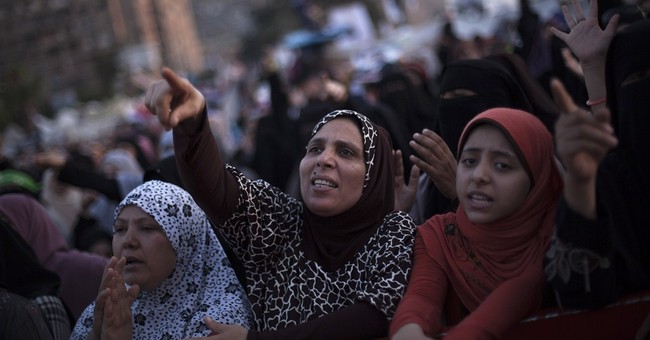 I must be mistaken. I was told that Al Qaeda was basically wiped out; for all intents and purposes it was dead.

Nope, that was Detroit.

Al Qaeda is very much alive as evidenced by the closing of embassies and consulates throughout the Middle East and Islamic world.

Wait, I must be confused again. The election of Barack Obama promised to usher in a new age of love from the Muslim world.

The drone attacks in Yemen signal a possible ramp up in kinetic action against Al Qaeda.

Hold on now. The administration promised no more war and pledged to try to withdraw all the military from areas of conflict.

Oh, I see. Because drones are robots piloted from simulators in Utah, that doesn't count.

The hard reality is this: the current Al Qaeda in the Middle East has arisen like a phoenix from the ashes of Al Qaeda Iraq (AQI). It has helped plunge Iraq back into a civil war, is fighting against Assad in Syria, operating in Libya, and training in Yemen.

The Arab Spring gave Al Qaeda the perfect opportunity to move into the chaos that ensued. We absconded the field and hung any allies out to dry. We still have troops scattered throughout the Middle East, but none are in a position to start fighting a hot war in a faraway nation (outside Afghanistan that is).

Yes, the Bush administration is responsible for creating AQI by invading Iraq -- just like the US helped create what would become the Taliban during the Afghan war against the Soviets.

Whether or not you believe we should have invaded Iraq in the first place, history should have taught us better than to leave a mess behind. Without our troops to continue to harass and kill AQI, Iraqi President Maliki was unable to smother the embers.

I am on record as calling for the withdrawal of troops: from Afghanistan to Iraq to Japan. Let other countries be responsible for policing themselves and carrying out their own revolutions. Let's only risk lives and treasure in retaliation, not nation building. However, even I must admit that sometimes it is better to leave some forces to guard against terrorism rather than suffer greater consequences later.

But our commander-in-chief does not agree. He has made promise after promise throughout the Islamic world and kept none. The result is that Obama is more hated than Bush, and America’s reputation has only declined.

Like Bush, Obama has excelled in killing and throwing resources at foiling terrorists. And like his predecessor, Obama has failed miserably in addressing grievances and reducing motivations for potential radicals to join outfits like Al Qaeda.

I will give Obama credit: he learned from Benghazi and made the right decision to close down the embassies. But the failure lies in the need to do so in the first place.

As long as Al Qaeda is focused on the Middle East and North Africa, our “betters” in Washington seem to think we are generally safe, and most Americans seem to agree.

But what happens when these war-hardened and well-funded terrorists turn their eyes back to the United States? Another 9/11 is not outside the realm of possibility; in fact, it is likely.

Will Obama be like Clinton, lamenting that he let AQ grow when he had the chance to step on its throat? Can we trust whomever will be president then to not overstep his or her bounds in war and personal liberties?

We can avoid these speculations by finally admitting that the only way the US can stop creating new terrorists is to quit giving them a target.

For too long we conceded the propaganda war in the Middle East to the Soviets. This accounts for the suspicion many Arabs harbor toward the West and America. But then again, we have done ourselves no favors.

To combat this distrust, we must actually engage the citizens of North Africa and the Middle East. Diplomats should be encouraged to make as many personal connections as possible rather than be constantly confined to the embassy.

We also must re-examine our actual policies towards these countries and their people. No amount of communication can overcome bad policy.

When force is needed, it must be precise. Drones are great for limiting our own casualties, but time after time we have seen them hit civilians rather than terrorists. Weddings and birthday parties blown up, falsely marked as insurgent kills, do not engender good will. In this case I do advocate using troops; not a large army division, but rather special operations forces. Eyes on the ground can distinguish harmless citizens from real targets.

If this sounds familiar, it should. It is called Smart Power. The Washington knitting circles on foreign policy talk about it to no end, but we continually fail to put in practice. Instead we get half-hearted attempts at soft power and heavy-handed thrusts with hard power.

Al Qaeda is on the move again. Rather than deny and obfuscate, the President needs to come clean to the American people about the threat. He then must make it a point to stop making false promises and start using smart power. If he fails us in this, I truly fear something worse than 9/11 is on the horizon.