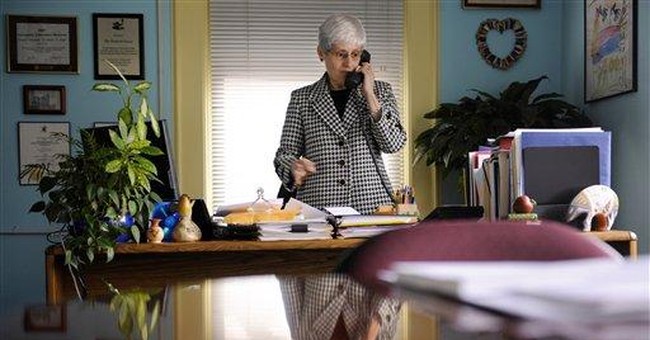 Heroes can and will emerge from the most unsuspecting places and make crucial decisions that can reverberate around the world. Rhode Island superintendent, Frances Gallo, boldly confronted the neglect of Central Falls High School students by pompous teachers and the Central Falls Teachers’ Union. Her challenge boldly illuminates the burden unions and governments jobs have on productivity and the overall quality of products that everyday Americans consume.

Frances Gallo was willing to courageously glare at the shameless monster of one of the worst school districts in the nation – reporting 50% of students failing their classes and less than 50% graduating. She was willing to challenge recklessly negligent teachers who were facilitating the abysmal performance of their students by with shameless apathy. In the end, all they cared about was their fat paychecks every two weeks, with no concern for the dismal results of their students.

The continuing embarrassing situation became a desperate matter for Gallo in the Rhode Island public school system. The shameless teachers and administrators boasted an average salary of $72,000 - $78,000 a year in a town where the average salary was only $22,000.

Thankfully, Frances Gallo became fed up and demanded that student results become a priority for these hypocritical, selfish teachers and demanded six changes that she knew would turn around the unaccountability of that school. These changes included: being subjected to new standards of professional evaluations, adding 25 minutes to the work day, meeting with other professionals weekly for planning sessions, eating lunch with students one day a week, two-week training in the summer and occasionally tutoring – all of which I am shocked were not a priority and demand for these teachers in the first place.

The cold-hearted and self-centered unions showed no compassion or commitment to improve the condition of their students. In fact they rejected and refused to enact any of Gallo's recommendations. This is where Frances Gallo’s conviction and commitment to the well-being of her students took precedent and fired nearly 100 teachers and administrators. Wow, thank you so much for your needed example of boldness!

Adding a little comedy to the scenario is the dear in the headlights response from a spokesperson from the union who claims that they didn’t think Frances Gallo had authority to do such a thing. It is as though this union is so shocked that a manager could care so much about the quality of teaching that is being delivered to our children that she was willing to do something about it. These unions have become completely comfortable in their power to get whatever they want.

Apparently, there are teachers out there who suggest that they would be open to such changes, however, they would like the terms to be negotiated first. What a joke! If I may translate this, these teachers don’t mind doing the extra work as long as they maintain complete control and are heavily compensated for their duties. Since when did helping children succeed not become a part of a teachers job description? There is nothing outrageous about Frances Gallo’s request.

Unfortunately, not all superintendents everywhere will be able to act as courageously as Gallo was able to. Most are heavily bound into air-tight contracts that prevent them from taking such action. In other words, if they want to do such a thing they will first have to negotiate with the unions who use their collective bargaining power to shut down any efforts to make teachers more accountable to our student. Gallo was able to escape solely due to a clause that allows management to step in – in only the worst of school districts.

In difficult economic times such as this, our country should look at the potential fiscal impact of such blatant selfishness. These teachers are paid by our government who collect their revenues through us. Because of this, they should be held accountable to the parents of their students for delivering a quality product. If they aren’t, one must consider what will happen to these children they so desperately failed. It is a well known fact that high school dropouts on an average make significantly less that a graduate. In addition, these students also rely more on government assistance than graduates. So in essence, these union’s irresponsibility is catching the American taxpayers coming and going.

There was a time when we as a country needed unions. Labor laws were loose, families were being exploited, people where faced to work in harmful conditions, etc. However, now the state has stepped in to implement laws to protect workers. This should be the framework through which industries organize.

Across the board, we have seen what happens when an industry become protected by bureaucracy. There becomes a lack of competition, and therefore the end product consumed is watered down to the point of not being drinkable. This is precisely what is happening to America and its school system. As a country we invest the most on a dollar amount than the rest. However, on average our children’s performance is still suffering in international competitiveness.

Why does it take so long for one person with courage and conviction to take an unprecedented and uncompromising stand against teachers union bosses that impede the education and progress of our school children across this nation? Nothing has eroded faster in this country than our primary public school system. This is only perpetuated by powerful and calloused teachers unions who bully administrators into accepting their way of doing business. And they just don’t stop with the so-called powerful teachers union.

As Americans, we need to halt the push for unionized jobs. The people of our country deserve the best products and productivity. Thankfully, Frances Gallo’s actions have been brilliantly showcased at a time when our country desperately needs more like her. Please superintendents everywhere, take note and get results!