A Suboptimal Showing Abroad and At Home 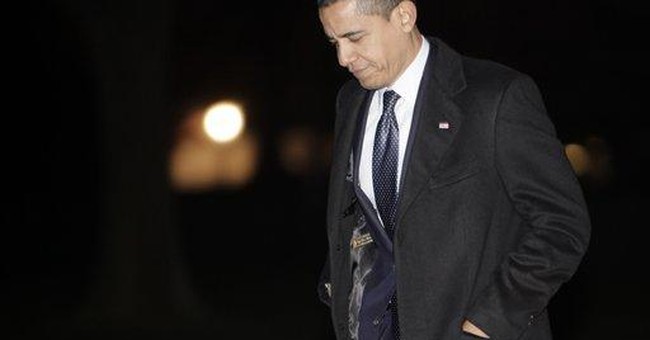 President Obama returns this week from his whirlwind, “It’s good to be me” tour through continental Europe and Asia. Many here stateside are beginning to whisper that Obama is the most arrogant leader this country has seen in a generation. He holds Americans and the Constitution in utter contempt.

He fires private sector CEO’s, wages class warfare on taxpayers (the top 1% income earners pay 40% of all federal income taxes, and the bottom 50% pay a minuscule 3%), and covets open-ended power to spend taxpayers money without check that would have made Gosplaners in the Soviet Union green with envy. He turns the Constitution on its head by describing the payment of taxes as a “patriotic duty” and staggering government spending as the beneficence of his band of Platonic Guardians. He has erased the vital distinction between public and private.

Mr. Obama has taken Narcissus to a new level. He is mesmerized by his own words. He wields no delusions of his own grandeur. However, when he goes abroad he can't be effacing enough for the bows and scraping to those luminaries around him. Remember the King of Saudia Arabia, to whom our President gave obeisance, is basica lly the leader of the Wahhabi branch of Islam. Bowing to this king signals submission to Islam. Indeed, “Islam” means “submission”. And in Saudi Arabia that means the suppression of Christianity or Judaism. President Obama has apologized for the United States history with Native Americans and blacks. He gazes at radical Islam with rose-colored glasses.

Are you getting this picture? Is it becoming clearer exactly what is beginning to happen to our beloved America?

And to compound matters, our President now craves the elimina tion of nuclear weapons. Does he not remember that atomic bombs at Hiroshima and Nagasaki saved millions of both American and Japanese lives and brought a terrible war to an instant conclusion? Does he not know of the history of arms control cheating by closed and despotic nations, like the Soviet Union, Iran, Syria, North Korea, Libya, Iraq, and otherwise. Does he not know that the elimination of nuclear weapons immediately strengthens nations with massive land armies like China’s People’s Liberation Army?

Mr. Obama’s national security follies are matched by his contempt for the Constitution which he is pledged to defend and support.

He has claimed Czar-like powers to detain indefinitely both citizens and non-citizens without accusation or trial or access to courts on his say-so alone by dispatching them to Bagram prison in Afghanistan. There, he has authorized procedures for determining who should be detained as “enemy combatants" that would be more fitting if adopted by Iran’s Mullahs.

The initial judgment is made “in the field.” It is reviewed within 75 days, and then at six month intervals. The reviewing body is the Unlawful Enemy Combatant Review Board (UECRB), a panel of three commissioned officers. It examines “all relevant informatio n reasonably available.” The detainee has no access to a personal representative or lawyer. He has no access to the government’s evidence. He has no opportunity to respond in person. He is limited to submitting a written statement without knowledge of either his accusers or the allegations that must be rebutted.

There are many terms that might describe Bagram procedures, but due process of law is not one of them. The Executive Branch decrees that “enemy combatant” status justifies detention, enfo rces the decree through executive detentions, and decides whether its enforcement decisions are correct. That combination was what the Founding Fathers decried as the “very definition of tyranny” in The Federalist 47.

In addition, the dispositive evidence and accusers are secret; and, the deciders are military persons the detainee is accused of desiring to kill, which may imbalance their judgments. It is no surprise that United States District Judge John H. Bates on April 2 held the procedures unconstitutiona in Fadi al Maqaleh v. Gates.

He has invoked state secrets to deny remedies to individual victims of constitutional wrongdoing, including torture or assassination. He has claimed the right to pick and choose which laws to enforce based on political convenience, and evaded the accountability that comes with a presidential pardon. He has frustrated congressional oversight by the invocation of executive privilege.

In the Senate, he voted against the Military Commissions Act of 2006 as running roughshod over constitutional rights. In the White House, he finds nothing objectionable about the Act’s crowning him with monarch-like authorities. He has enlisted 800,000 state and local law enforcement officers to spy on Americans under the beguiling umbrella as “fusion centers,” while the murder clearance rate remains a dismal 61%.

Alex de Tocqueville, writing in Democracy in America , forecast a world in which Russia and the United States would dominate. But he sharply distinguished between how the two would assert their influence:

“[T]he conquests of the American are made with the plowshare of the laborer, those of the Russian with the sword of the soldier.

“To attain his goal, the first relies on personal interest and allows the force and reason of individuals to act without directing them. The second in a way concentrates all the power of society in one man,

“The one has freedom for his principle means of action; the other servitude.”

That distinction is rapidly diminishing to the disadvantage of the United States under President Obama.