Arizona Attorney General Mark Brnovich
|
Posted: Nov 11, 2021 12:00 PM
Share   Tweet
The opinions expressed by columnists are their own and do not necessarily represent the views of Townhall.com. 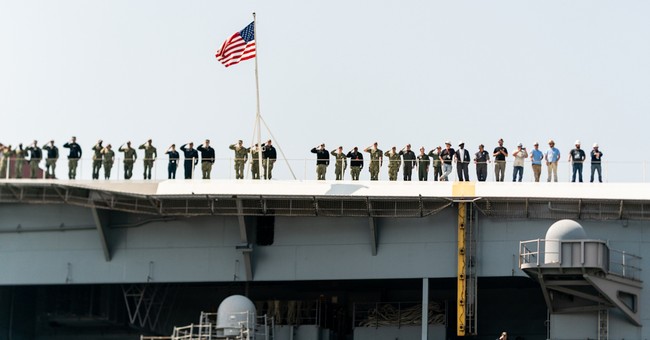 On this Veterans Day, we honor and remember the men and women who have served our nation, sacrificed for this country, and devoted themselves to the cause of American freedom.

The United States is the greatest and freest nation, but we have not achieved this status by chance. Nor will we enjoy these hallmarks in the future by relying on past heroism. In his first inaugural speech as Governor of California, Ronald Reagan aptly said, “Freedom…is not ours by way of inheritance; it must be fought for and defended constantly by each generation.”

If only our nation would heed this advice. Today, too many Americans take freedom for granted, and too many of our politicians work around the clock to dismantle them. These freedoms come from our Creator, not from man; and they have been defended and preserved– not by politicians – but by our veterans and all those who have worn our nation’s uniform.

While radical interests are doing everything in their power to rewrite our history, we should take greater care to remember and honor the men and women who have served our nation. We must acknowledge and pass down for future generations of Americans the fact that we would not be here at this moment but for courageous patriots standing up to tyranny, despotism, and evil to stop these forces in their tracks. Unfortunately, there are other nations that do not honor their veterans, but here in America, stories about our veterans fill us with inspiration and gratitude.

Our nation’s military history officially starts with the Continental Army during the American Revolution. The people who served were traitors to the Crown, and they and their families faced horrific consequences if their participation was uncovered. Not only this, but they suffered through terrible conditions on the ground – most famously their winters at Valley Forge, Pennsylvania. Our first veterans’ service, sacrifice, and devotion carried the Americans to victory and gave birth to our great nation.

Fast forward to the War of 1812 to the brave Americans who withstood the bombing of Fort McHenry in Baltimore. Their efforts assured that our new nation would continue to experience freedom under our Star Spangled Banner.

Thousands of brave Americans stormed beaches from the Pacific to Normandy, saving the free world from a permanent Axis empire.

Americans fought bravely during the Cold War from Korea to Vietnam at places like Pork Chop Hill, Inchon, Khe Sanh, to the Ia Drang Valley – not to conquer, but to fight for freedom.

And to the present day, countless American have waged war against terrorism in the Middle East and other parts of the world in recent decades, taking the battle to an unhinged and deranged enemy intent on causing mass destruction on our shores.

Since the beginning of our nation’s history, hundreds of thousands of brave Americans have enlisted in our military because the benefits of defending this truly unique country outweighed the cost of any sacrifice they may have been called upon to make. Men and women have postponed their careers and their time with families to serve in our Armed Forces. And for all the loved ones of our veterans, the sacrifice goes both ways.

It is all of our veterans who make it possible for us to be sitting at home with our families, working to earn a living, acquiring an education, playing with our children, or participating at our houses of worship. We can never take these freedoms for granted – and as we see from our nation’s history, they are far from free.

Far too often we hear people disparaging our country, or our heroic efforts to bring freedom to more people than any other country in history, or our traditional American values, or our cherished way of life. It should make every American mad. Such sentiments grossly distort and belittle the service, sacrifice, and devotion that have been on display from so many for so long in this nation.

We must resolve to continue the fight for our country’s future upon the foundation provided to us from each generation of our veterans. We cannot abandon America to those who want to destroy our history and the memories of those who have been willing to give their last full measure of devotion to defend the ideas and principles of freedom.

Throughout our nation’s history, we have been left countless legacies of service, sacrifice, and devotion from our veterans. Let us take those examples into our hearts and always find the strength to join our veterans in defense of this great country, the United States of America.