Happy Kwanzaa! The Holiday Brought to You by the FBI

Ann Coulter
|
Posted: Dec 26, 2018 8:15 PM
Share   Tweet
The opinions expressed by columnists are their own and do not necessarily represent the views of Townhall.com. 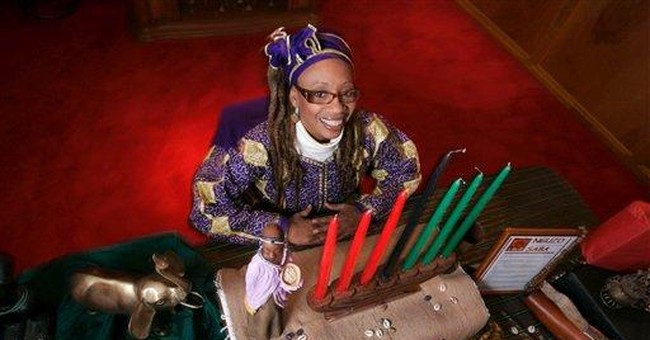 The day after Christmas, President Trump issued his official Kwanzaa greetings from the White House:

"This annual celebration of African heritage, unity and culture is a special opportunity for many to reflect on their shared ancestry and values. At this time, our nation joins in honoring the important contributions of African-Americans to the strength and success of the United States."

We have to assume this was Jared's idea.

1) Fire James Comey -- the Democrats will love it!

2) Hire Anthony Scaramucci -- we need to bring professionalism to the communications department!

3) Back Luther Strange in the Alabama Senate primary and diss Mo Brooks, the MAGA candidate -- don't worry, this won't lead, like night into day, to a primary victory by Roy Moore and a Democratic pickup in the most conservative state in the union.

5) Back Obama's Paris climate accord -- this won't result in mass protests when fuel prices soar in the countries that signed it!(Like France.)

6) Defend bone saw-killer Mohammed bin Salman to the hilt -- I'm sure he's not manipulating me at all!

In what was ultimately a foolish gambit, during the madness of the '60s, the FBI encouraged the most extreme black nationalist organizations in order to discredit and split the left. The more preposterous the group, the better. (It's the same function MSNBC and CNN serve today.)

Those were the precepts of Karenga's United Slaves. The United Slaves were proto-fascists, walking around in dashikis, gunning down Black Panthers and adopting invented "African" names. (I will not be shooting any Black Panthers this week because I am Kwanzaa-reform, and we are not that observant.)

In a 1995 interview with Ethnic NewsWatch, Karenga matter-of-factly explained that the forces out to get O.J. Simpson for the "framed" murder of two whites included: "the FBI, the CIA, the State Department, Interpol" and so on. Karenga should know about FBI infiltration. (He further noted that the evidence against O.J. did not "eliminate unreasonable doubt" -- an interesting standard of proof.)

In one barbarous outburst, Karenga's United Slaves shot two Black Panthers to death on the UCLA campus: Al "Bunchy" Carter and John Huggins. Karenga himself served time, a useful stepping-stone for his current position as the chair of the Africana Studies Department at California State University at Long Beach.

Back to the esteemed Cal State professor: Karenga's invented holiday is a nutty blend of schmaltzy '60s rhetoric, black racism and Marxism. The seven principles of Kwanzaa are the very same seven principles of the Symbionese Liberation Army, another invention of The Worst Generation.

In 1974, Patty Hearst, kidnap victim-cum-SLA revolutionary, famously posed next to the banner of her alleged captors, a seven-headed cobra. Each snakehead stood for one of the SLA's revolutionary principles: Umoja, Kujichagulia, Ujima, Ujamaa, Nia, Kuumba and Imani. These are the exact same seven "principles" of Kwanzaa. (And here's something interesting: Kawaida, Kwanzaa and Kuumba are also the only three Kardashian sisters not to have their own shows on the E! network.)

Kwanzaa praises collectivism in every possible area of life. It takes a village to raise a police snitch. When Karenga was asked to distinguish Kawaida, the philosophy underlying Kwanzaa, from "classical Marxism," he essentially said that, under Kawaida, we also hate whites.

Kwanzaa was the result of a '60s psychosis grafted onto the black community by the founder of a murderous black nationalist cult with the FBI's seal of approval.