Ann Coulter
|
Posted: Jan 04, 2017 5:22 PM
Share   Tweet
The opinions expressed by columnists are their own and do not necessarily represent the views of Townhall.com. 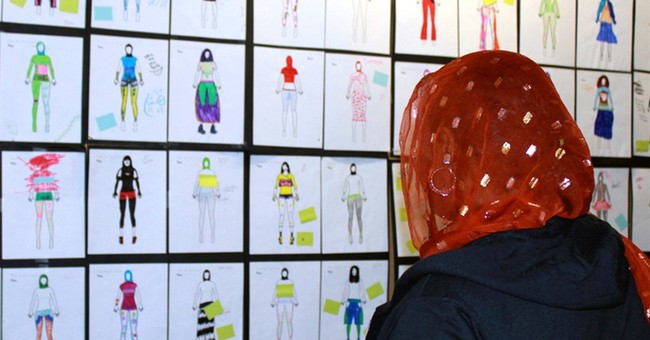 Has there been one (1) documented hate crime committed by white people against any hue in the Rainbow Coalition since Nov. 8? That's out of the 9,456,723 hate crimes alleged by America's leading hate group, the Southern Poverty Law Center (SPLC).

The SPLC is to "hate" what Rolling Stone is to rape. It is the biggest peddler of fantasies since Walt Disney.

I've read through dozens of SPLC "hate crimes" and they are all lies. The Muslim girls in particular seem to be very spirited liars.

The main take-away from all these stories is: We sure have taken in a lot of Muslims! They seem to have trouble assimilating to American laws about not committing mass murder, but the good news is, when it comes to America's culture of victimhood, they assimilate like fish to water!

This isn't mass psychogenic illness, like when cheerleaders at the same high school all develop tics. It's not even the Salem witch trials. At least the Salem witch-hunters believed in witches. The Muslim hoaxers are lying, and they know they're lying.

If Muslims want to convince me that they're living in abject fear in Trump's America, instead of rushing to the media, somebody's got to leave.

I've heard endless stories about the reign of terror against Muslims, but have yet to hear of one single Muslim -- much less a wave of Muslims -- moving out of the United States.

It's not as if they get depressed at the thought of abandoning the old ancestral home, where their great-grandparents are buried. They just got here!

If any Muslim were at risk of so much as a dyspeptic look from white Americans, there's emigration as well as immigration.

But to the contrary, we can't keep them out! They get huffy and give indignant speeches at the Democratic National Convention at the suggestion of a mere pause in Muslim immigration.

The greatest fear of Muslims these days is that they won't be home when the "Today" show calls and will miss the opportunity to regale credulous hosts with stories about their victimization at the hands of white American men (whose great-grandparents are buried here).

The left has gone so insane that the SPLC, the main propagator of fake hate crimes, is the media's go-to expert on hate. SPLC spokesmen appear on TV and defame all the people they hate: whites, Christians, Trump supporters, cops, frat boys and so on.

The SPLC is like the cult awareness groups taken over by Scientologists. Terrified parents would call for help in rescuing their kids from Scientology and be told, No, Scientology is not a cult.

With the SPLC, the "hate watch" group is the hater. Unlike some toothless nobody claiming to be a member of the ALL-POWERFUL KU KLUX KLAN, the SPLC's slanders are instantly amplified by the media megaphone in somber interviews conducted by the most easily fooled people in the universe, American journalists.

Breitbart, Daily Caller and others have done a great job collecting the hoax hate crimes since the election, but we need a central clearinghouse to keep up with the volume.

How about someone found the Northern Poverty Law Center (NPLC), to document actual hate crimes and expose the hoaxes being spit out on an assembly line by the SPLC? Maybe the Koch brothers could get back in Trump's good graces by funding this much-needed service.

The soon-to-exist NPLC ought to be in the Rolodexes of every media organization, so they can stop reporting fake news and start covering the real hate crimes currently ignored by the press.

The only incidents of actual "hate" since the election have been entirely in one direction: against (mostly white) Trump supporters. This isn't surprising given the climate of hate being spread by the media.

At this point, any claim of "hate" directed at Muslims, blacks, gays or Hispanics by Trump supporters should be treated as if it's a UFO sighting: presumed false, unless documented with irrefutable evidence.

But until the NPLC is up and running, here are some tips for journalists:

-- Real hate crimes do not begin with laughably implausible scenarios. Try to use a modicum of common sense.

-- They are almost always captured on videotape or at least are seen by actual witnesses who give statements to the police. Lachrymose accounts posted on Facebook do not constitute evidence.

-- They generally result in medical treatment and arrests.

The Trump Justice Department needs to create an office that will serve as a liaison with this new civil rights organization, the Northern Poverty Law Center. Because eradicating hate is Job No. 1!