Ann Coulter
|
Posted: Jun 08, 2016 3:59 PM
Share   Tweet
The opinions expressed by columnists are their own and do not necessarily represent the views of Townhall.com. 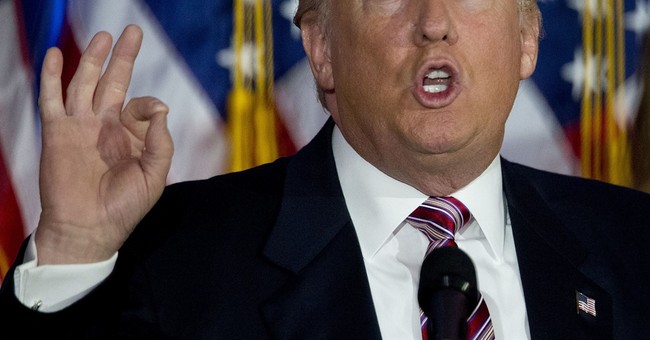 Annoyed at federal judge Gonzalo P. Curiel’s persistent rulings against him in the Trump University case (brought by a law firm that has paid hundreds of thousands of dollars for speeches by Bill and Hillary), Republican presidential nominee Donald Trump said that maybe it’s because the judge is a second-generation Mexican immigrant.

Curiel has distributed scholarships to illegal aliens. He belongs to an organization that sends lawyers to the border to ensure that no illegal aliens’ “human rights” are violated. The name of the organization? The San Diego La Raza Lawyers Association — “La Raza” meaning THE RACE.

Let’s pause to imagine the nomination hearings for a white male who belonged to any organization for white people — much less one with the words “THE RACE” in its title.

The media were going to call Trump a racist whatever he did, and his attack on a Hispanic judge is way better than when they said it was racist for Republicans to talk about Obama’s golfing.

Has anyone ever complained about the ethnicity of white judges or white juries? I’ve done some research and it turns out … THAT’S ALL WE’VE HEARD FOR THE PAST 40 YEARS.

Two weeks ago–that’s not an error; I didn’t mean to type “decades” and it came out “weeks” — the Times published an op-ed by a federal appeals judge stating: “All-white juries risk undermining the perception of justice in minority communities, even if a mixed-race jury would have reached the same verdict or imposed the same sentence.”

In other words, even when provably not unfair, white jurors create the “perception” of unfairness solely by virtue of the color of their skin.

Innocence Project co-founder Barry Scheck’s entire career of springing criminals would be gone if it were generally accepted that we can’t question judges or juries based on race or ethnicity. Writing about the release of Glenn Ford, a black man convicted of robbing a jewelry store and murdering the owner, Scheck claimed that one of the most important factors in Ford’s death sentence was the “all-white jury.”

On the other hand, the evidence against Ford included: His two black friends telling police he’d shown them jewelry the day of the murder, another Ford acquaintance swearing he’d had a .38 in his waistband — the murder weapon was a .38 — and the gunshot residue on Ford’s hand. His conviction was overturned many years later, on the theory that his black friends had committed the murder, then framed him.

So we know 1) the “real killers” were also black; and 2) any jury would have convicted Ford on that evidence.

Here’s how the Times described Ford’s trial: “A black man convicted of murder by an all-white jury in Louisiana in 1984 and sentenced to die, tapped into an equally old and painful vein of race.”

I have approximately 1 million more examples of the media going mental about a “white judge” or “all-white jury,” and guess what? In none of them were any of the white people involved members of organizations dedicated to promoting white people, called “THE RACE.”

Say, does anyone remember if it ever came up that the Ferguson police force was all white? Someone check that.

I don’t want to upset you New York Times editorial board, but perhaps we should revisit the results of the Nuremberg trials. Those were presided over by – TRIGGER WARNING! – “all white” juries. (How do we really know if Hermann Göring was guilty without hearing women’s and Latino voices?)

The model of a fair jury was the O.J. trial. Nine blacks, one Hispanic and two whites, who had made up their minds before the lawyers’ opening statements. (For my younger readers: O.J. was guilty; the jury acquitted him after 20 seconds of deliberation.) At the end of the trial, one juror gave O.J. the black power salute. Nothing to see here. It was Mark Fuhrman’s fault!

In defiance of everyday experience, known facts and common sense, we are all required to publicly endorse the left’s religious belief that whites are always racist, but women and minorities are incapable of any form of bias. If you say otherwise, well, that’s “textbook racism,” according to Paul Ryan.

At least when we’re talking about American blacks, there’s a history of white racism, so the double standard is not so enraging. What did we ever do to Mexicans? Note to Hispanics, Muslims, women, immigrants and gays: You’re not black.

Other than a few right-wingers, no one denounced now-sitting Supreme Court Justice Sonia Sotomayor for her “wise Latina” speech, in which she said “our gender and national origins may and will make a difference in our judging.”

But Trump is a “racist” for saying the same thing.

Six months ago, a Times editorial demanded that the Republican Senate confirm Obama judicial nominee Luis Felipe Restrepo, on the grounds that “[a]s a Hispanic,” Restrepo would bring “ethnic … diversity to the court.”

The effrontery of this double standard is so blinding, that the only way liberals can bluff their way through it is with indignation.DO I HEAR YOU RIGHT? ARE YOU SAYING A JUDGE’S ETHNICITY COULD INFLUENCE HIS DECISIONS? (Please, please, please don’t bring up everything we’ve said about white judges and juries for the past four decades.)

They’re betting they can intimidate Republicans — and boy, are they right!

The entire Republican Brain Trust has joined the media in their denunciations of Trump for his crazy idea that anyone other than white men can be biased. That’s right, Wolf, I don’t have any common sense. Would it help if the GOP donated to Hillary?

The NeverTrump crowd is going to get a real workout if they plan to do this every week between now and the election.

What do Republicans they think they’re getting out of this appeasement? Proving to voters that elected Republicans are pathetic, impotent media suck-ups is, surprisingly, not hurting Trump.