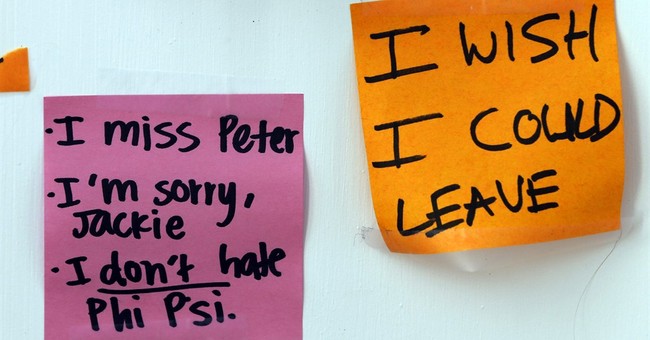 Trending
TAKE BACK THE NIGHT!

Even the feminist-whipped media parted company with Rolling Stone magazine over Sabrina Rubin Erdely's story about an alleged fraternity gang-rape at the University of Virginia -- since retracted.

But while dismantling every part of this preposterous rape claim by a woman Rolling Stone calls "Jackie," journalists rush to assure us that "sexual assault at colleges and universities is indeed a serious problem," as an article in Slate put it.

If we're in the middle of a college-rape epidemic, why do all the cases liberals promote keep turning out to be hoaxes? Maybe I'm overthinking this, but wouldn't a real rape be more persuasive?

Instead, all the hair-on-fire college rape stories have been scams: the Duke lacrosse team's gang-rape of a stripper; Lena Dunham's rape by Oberlin College's "resident Republican," Barry; and Rolling Stone's fraternity gang-rape at UVA. Two of the three were foisted on the public -- and disproved in public -- only in the last few weeks.

The only epidemic sweeping the nation seems to be Munchausen rape syndrome. What's next, college noose hoaxes?

Even Lady Gaga recently claimed she was raped, although, she admitted: "I didn't even tell myself for the longest time." How do you not "tell" yourself you've been raped?
CARTOONS | Steve Kelley
View Cartoon

Rolling Stone's fantasist rape victim told The Washington Post she didn't report her rape or go to the hospital because "she was new to campus and unaware of the resources available to her."

Who doesn't report a brutal crime? I had my right arm sawed off by an attacker several years ago, but I was unaware of the resources available to me, so I never pressed charges. I didn't even admit it to myself until several years later.

Although Jackie had spoken about her rape at a "Take Back the Night" rally, she told the Post that if Rolling Stone's Erdely hadn't approached her, "I probably would not have gone public about my rape."

Except for being imaginary, Jackie's rape should have been easy to prove. In addition to the fact that she would have been a bloody mess, it was supposed to have happened at a fraternity. That narrows the suspect pool down from "anyone who was in the Charlottesville, Virginia, area on Sept. 28, 2012" to "40 specific guys, 20 percent of whom are, by definition, guilty of rape."

The zealots aren't backing down from Jackie's Lifetime Movie-of-the-Week rape fantasy, even as every single part of it is proved untrue. Her "close friends," The Washington Post reports, insist that "something traumatic happened to her."

Similarly, Rolling Stone authoress Erdely told Slate, "There's no doubt in my mind that something happened to her that night" based on "the degree of (Jackie's) trauma." After all, she's been diagnosed with post-traumatic stress disorder and is taking antidepressants!

Another explanation for her trauma is: Jackie is a nut. Have you considered the possibility that your protagonist is out of her mind?

(The fact that Erdely is an "award-winning" investigative journalist tells you everything you need to know about modern journalism. Of course, her one award was from Rape Hoax Monthly, which should have been a tip-off.)

College must be difficult for white, straight coeds, because it's so hard to be a victim. You're not black, you're not gay, you don't have leprosy -- what can you do to acquire victim cool? Join the rape club!


On college campuses, two millennia of Anglo-Saxon law has been scrapped in deference to sexual assault doctrines that would embarrass Chairman Mao. Young men's futures are being put in the hands of the most closed-minded, reason-free, quick-to-accuse, unfair, standardless humans on Earth.

I'm sorry we were popular in high school! Can you stop accusing us of rape now?
In penance for publishing a book that falsely accused Oberlin's Barry of rape, Random House offered to pay his legal fees, suggesting that his law firm "donate all of the crowd-funding raised (to sue Random House) to not-for-profit organizations assisting survivors of rape and sexual assault."

The main threat to college students' physical and emotional safety these days comes not from athletes or fraternity members, but from the feminists.
The 2013 Ruth Bader Ginsburg-Obama Lunch That Could Have Spared Liberals Much Heartbreak
Matt Vespa
Re-Shattering the Blue Wall? The Rust Belt Trends Towards Trump in New Poll
Matt Vespa
This Softball Question to Kamala Blew Up in Her Face
Bronson Stocking
Key Senator Confirms Judge Amy Coney Barrett is Trump's Choice for SCOTUS
Katie Pavlich
Did You See the Tweaks House Democrats Want to Apply to SCOTUS?
Matt Vespa