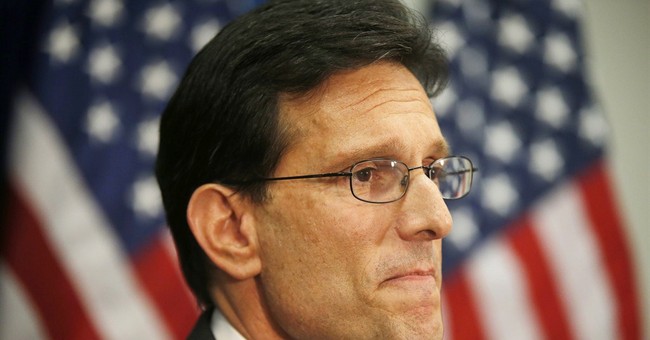 This marks the first time a U.S. House majority leader has ever lost a primary election.

His crushing defeat reinforces a central point: Whenever the voters know an election is about immigration, they will always vote against more immigration -- especially amnesty.

Cantor spent more than $5 million on his campaign. Brat spent less than $150,000. But Brat made the election about Cantor's support for amnesty, so he won.

The pro-amnesty crowd -- i.e., everyone except the American people -- promptly lost its collective mind. The amnesty shills went on the attack, insisting that Cantor's historic defeat had nothing to do amnesty. Brat's triumph was touted as simply a victory for the "tea party."

Of course, these are the same people who also try to persuade us that amnesty isn't "amnesty," illegal aliens aren't "illegal aliens" (they're "undocumented workers"!), and that there are 30 million jobs Americans won't do at any price.

In fact, however, the tea party had nothing to do with Brat's victory. Only the small, local tea party groups stand for anything anymore, but they're as different from the media-recognized "tea party" as lay Catholics are from the Catholic bishops.

National tea party groups did not contribute dime one to Brat. Not Freedom Works, not Club for Growth, not the Tea Party Express, not Tea Party Patriots. They were too busy denouncing Sen. Mitch McConnell -- who has consistently voted against amnesty.

As I have been warning you, the big, national tea party groups are mostly shysters and con-men raising money for their own self-aggrandizement. (Today, they're blast-faxing "media availability" notices to television networks claiming credit for Brat's victory.)

The Tea Party Express, for example, "represents" the views of ordinary Americans by supporting Chamber of Commerce demands for cheap labor through amnesty.

As Eric Hoffer said, "Every great cause begins as a movement, becomes a business, and eventually degenerates into a racket."

Nonetheless, the claim that Brat's victory was a win for the tea party is everywhere -- pushed with suspicious insistence by people who do not usually wish the Republican Party well. Democratic National Committee Chair Debbie Wasserman Schulz, for example, said: "Tonight's result in Virginia settles the debate once and for all -- the tea party has taken control of the Republican Party. Period."

Liberals apparently want Brat's victory to be seen as a win for the tea party, and not a defeat for amnesty.

At least acknowledging the obvious -- Brat's victory was about amnesty -- New York's Sen. Chuck Schumer said: "Cantor's defeat does not change the fundamental fact that Republicans will become a minority party if they don't address our broken immigration system."

And if anyone has the Republican Party's best interests at heart, it's gotta be Chuck Schumer!

Is Schumer's harangue enough to convince the bubbleheads in the GOP to say: Let's take it to the Democrats on this issue! They could start by asking Schumer: "How come we don't get to have the same immigration policy that Israel does?"

I like Israel's immigration policy: instant, unapologetic, unsentimental deportation of illegal aliens. Schumer obviously supports that policy, too. It's one of many Israeli policies we might try here at home, if only Schumer would let us.

On Fox News, Mark Thiessen assured viewers that Brat's victory was not about amnesty at all, but was an expression of the same anti-establishment sentiment we've seen elsewhere this year. He specifically cited Ben Sasse's victory in the Nebraska Senate GOP primary, and Chris McDaniel's forcing incumbent Sen. Thad Cochran into a run-off in Mississippi.

(1) Ben Sasse was running for an open seat -- there was no "establishment" Republican to defeat.

(2) McDaniel has made his opposition to amnesty the centerpiece of his campaign.

There were, in fact, a couple of tea party challenges this year to so-called "establishment" Republican incumbents such as McConnell and John Cornyn. They both voted against the Schumer-Rubio amnesty. They both won.

Sen. Lindsey Graham's win last night is hardly a counter-example. His $8 million war chest discouraged serious challengers, he ended up with six opponents and, as a result, that race attracted no national anti-amnesty attention. Graham sure didn't stress his support for amnesty during the campaign. (He's saving that as a surprise!)

Fox News' Carl Cameron blamed Cantor's loss on the rain: "It's worth noting that the weather was foul here yesterday and today as well. So some of it may have been nature helping out David Brat."

Sixty-five thousand ballots were cast in the Cantor-Brat contest. That is not a large turnout for a congressional primary election -- it's gigantic. In Cantor's 2012 primary, 47,037 people voted. In the only other two congressional primaries in Virginia on Tuesday -- the day with all that rain! -- 38,855 people voted in one and 17,444 in the other.

Every excuse in the book is being trotted out to claim this election was about anything but amnesty. Cantor was "arrogant." He was "out of touch." Democrats crossed over to vote for Brat. Cantor was "overconfident." (Also, the sun was in his eyes!)

It's all the same boilerplate used to rationalize any election loss. Let's take one. Overconfident? Are you kidding me? Cantor spent more than $5 million on a congressional primary!

Cantor's idiotic statements about amnesty lit up talk radio, were denounced daily on major websites such as Breitbart.com, and were the dominant theme of Brat's campaign, especially in the last few months. The influential Kausfiles.com became a one-man Eric Cantor Rapid Response Team on amnesty.

Still not convinced Brat's victory was about amnesty? Then tell me why The New York Times ran this headline on Wednesday: "Why Did Cantor Lose? Not Easy to Explain."COPYRIGHT 2014 ANN COULTER