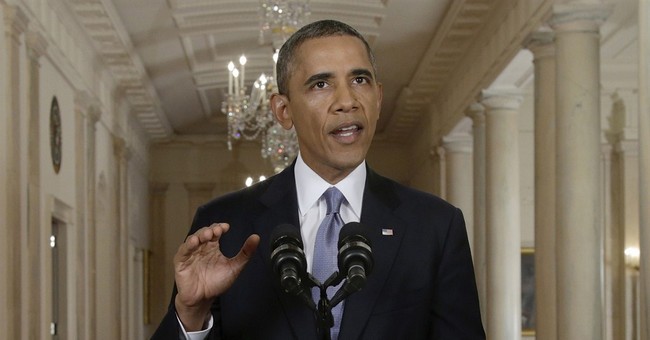 Americans unsure what to think about President Obama's plans for Syria should remember that all military action undertaken by Democrats for the last half-century has led to utter disaster. (With the possible exception of the Village People's "Y.M.C.A." video, which I say still holds up.)

Democrats are gung-ho about deploying the U.S. military provided only that it will harm the national security interests of the United States, but vehemently oppose interventions that serve American interests.

Republican President Dwight Eisenhower, the supreme commander of the Allied forces in World War II, said he could conceive of no greater tragedy than the U.S. getting heavily involved in Vietnam. He sent aid to the anti-communist forces, but no troops.

Democratic President John F. Kennedy sent troops. But in short order he was conniving to assassinate South Vietnamese president Ngo Dinh Diem -- also known as "our ally in the middle of the war."

JFK's brother, the Democratic attorney general, actually suggested that Americans donate blood to the North Vietnamese -- or "our enemy" -- as a gesture of good will. (Secretary of State John Kerry's bold threat this week of an "unbelievably small" strike against Syria sounds positively macho by comparison.)

Kennedy's successor, Lyndon B. Johnson, escalated the war in Vietnam in order to prove that Democrats could be trusted with national defense. Which they cannot. As journalist David Halberstam reported, LBJ would "talk to his closest political aides about the McCarthy days, of how Truman lost China and then the Congress and the White House, and how, by God, Johnson was not going to be the president who lost Vietnam and the Congress and the White House."

LBJ sacrificed tens of thousands of American lives to try to make the Democrats look manly.

Nixon came in and honorably ended the Democrats' disastrous handling of the Vietnam War by signing the Paris Peace Accords in January 1973. In return for the lousy terms we jammed down South Vietnam's throat, America promised that, if the North attacked, the U.S. would resume bombing missions and military aid.

America hadn't been humiliated -- the left had to act fast! The media invented Watergate, Nixon was forced to resign and a crazily left-wing Congress was inaugurated. Just a month later, North Vietnam attacked the South, and the Democratic Congress turned its back on South Vietnam, betrayed an ally and trashed America's word. (For Democrats, that's a "victory.")

In 1953, President Eisenhower assisted the Shah of Iran in removing loon Mohammad Mossadegh as prime minister. Mossadegh had been elected in the confusion after the assassination of the previous prime minister, whereupon he promptly nationalized Iran's oil fields, driving out the British companies who knew how to run them, thus wiping out Iran's primary source of wealth. With British and American help, the shah's choice was installed as prime minister, and a friendly government ruled Iran.

Alas, 20 years later, Jimmy Carter became president. When Islamic fundamentalists staged a revolution in Iran, Carter refused to come to the aid of the shah, a staunch American ally. Liberals praised Ayatollah Khomeini to the skies -- Carter's U.N. ambassador Andrew Young, Princeton's Richard Falk and LBJ attorney general Ramsey Clark all assured us that life would be peachy under him. What could go wrong?

The ayatollah had barely seized power when Islamic lunatics took 52 Americans hostage in Tehran, where they remained for 444 days, until Carter was safely removed from office.

For the next eight years, peace and freedom spread throughout the world as President Ronald Reagan destroyed the Soviet Union and restored America's power. Liberals wailed and stamped their feet throughout this period.

In the face of mass starvation in Somalia, President George H.W. Bush sent troops to ensure that aid could get into the country. President Clinton came in and decided to convert this simple relief effort into an exercise in "nation-building." In Somalia. Great idea.

In short order, the Muslim rebels killed some of our troops and dragged their corpses through the streets. Clinton instantly withdrew our entire military operation. (And then retired to the windowless hallway between the Oval Office and the kitchen area to contemplate and reflect.)

Years later, Osama bin Laden would laugh about America cutting and running from Somalia, noting how this show of weakness had encouraged his al-Qaida fighters.

Which led, like night into day, to ... the 9/11 terrorist attacks. In response, President George W. Bush invaded Afghanistan and wiped out the Taliban and al-Qaida strongholds in a few months. Bush left a limited force behind to prevent a return of the terrorist training camps.

Most crucially, President Bush removed a monstrous dictator from Iraq and established the only Islamic democracy in the Middle East. Iraq's Saddam Hussein had aided and sheltered terrorists, attempted to assassinate a former president of the United States, and horribly brutalized his own people, murdering a million of them, according to The New York Times -- including with chemical weapons, far worse than anything Syrian president Bashar Assad is accused of doing.

Iraq became a beacon of hope for all Muslims still living under despotic regimes.

For absolutely no reason, with no objective and no concept of "victory," Barack Obama came into office and massively escalated the number of troops in Afghanistan. When Bush left office, there had been only about 625 U.S. troop fatalities in the entire course of the Afghanistan War. Obama has quadrupled that to nearly 2,300 troop deaths today.

For no purpose whatsoever -- no purpose, that is, other than fulfilling Obama's idiotic campaign talking point about Afghanistan being a "war of necessity," contrasted with Iraq, a potty little "war of convenience." (At least Obama's "credibility" on Afghanistan is still intact!)

Then Obama threw away our victory in Iraq. By withdrawing every last troop, Obama has allowed al-Qaida and Iran to overrun this one shining example of an Arab democracy. We have American troops stationed in Germany, Japan, Belgium, Africa, Norway (a notorious al-Qaida hotbed!), Singapore, Qatar, Diego Garcia, even little Djibouti. But no troops for you, Iraq!

Obama didn't even have to do anything in Iraq! He only had to not remove all our troops.

Instead, Obama flung America's prestige into removing the pro-Western Hosni Mubarak in Egypt. Mubarak supported U.S. policy, used his military to fight Muslim extremists and recognized Israel's right to exist. Or as the left calls it: Three strikes and you're out. The Muslim Brotherhood immediately seized control of Egypt, leading to this year's military takeover. Can we bring Mubarak back?

Then Obama ordered air strikes in Libya against Moammar Gadhafi -- after having someone at the United Nations sign his permission slip. The timing couldn't have been better! Gadhafi had already agreed to give up his nuclear program after George W. Bush invaded Iraq. Seeing that, the Libyan strongman went whimpering to the British to ask if Bush was going to invade him, too.

The Iraq War turned every Middle Eastern despot into President Bush's bitch. But now Obama is their bitch.

I know you liberals care more about free birth control than geopolitics, but if you keep electing Democrats, you'll be getting fitted for burqas, not IUDs.