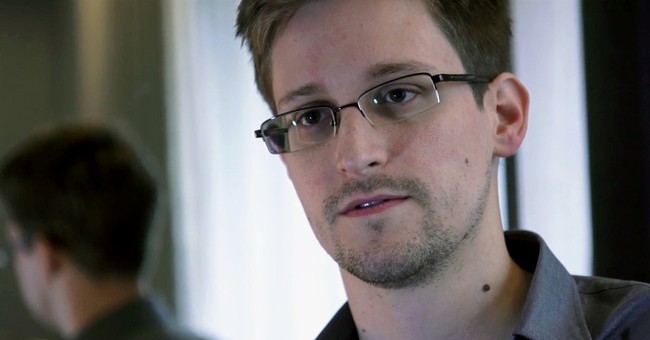 Well, of course the government is spying on Americans! Look at the havoc caused by American citizens engaging in terrorism.

There were the 20 "American" men from the Minneapolis area who joined a terrorist group in Somalia in 2008. I knew the Democratic–Farmer–Labor Party would cause trouble one of these days!

No, wait -- wrong again. We invited these foreign terrorists to immigrate here after the collapse of Somalia's government in 1991. (And what a great deal for America that was! I'm so glad Obama's doing it again with Syrian rebels.)

These hardworking Somali immigrants produced -- in the words of The New York Times -- "the first known American suicide bomber"! Go U.S.A.! Who could have guessed that Shirwa Ahmed would be America's first suicide bomber? (My money had been on a guy named "Jim Peterson.")

If you can't trust "American citizen" Cabdulaahi Ahmed Faarax, what Americans can you trust these days? Or to quote Sen. Bob Casey, the mentally disabled Democratic senator from Pennsylvania: "It's really disturbing -- Americans becoming radicalized."

Then there were the six "New Jersey men" who plotted a terrorist attack on the Fort Dix military base in 2007. Using rocket-propelled grenade launchers, they estimated they could kill at least 100 soldiers.

Chris Christie, then the U.S. attorney for New Jersey, said surveillance tapes showed the men watching videos of Americans being killed in Afghanistan.

"(T)hey watched the blowing off of the arm of a United States Marine and the room burst out into laughter," Christie said. "These are the types of people we are dealing with."

The New Jersey men were named Mohamad Shnewer, Serdar Tatar, Agron Abdullahu, Dritan Duka, Eljvir Duka and Shain Duka. Four were from the former Yugoslavia, one was from Turkey and one was from Jordan. All were illegal aliens.

But we needed them! As Marco Rubio's staff recently told The New Yorker, American workers "can't cut it."

If the government can spy on Cherry Hill's Mohamad Shnewer, how can we draw the line at Fox News' James Rosen and CBS News' Sharyl Attkisson?

Then there's "American citizen" Maj. Nidal Hasan, who is still collecting his handsome military salary -- up to nearly $300,000 by now -- since being accused of a terrorist attack on Fort Hood that left 13 dead and dozens wounded.

And don't forget "American citizen" Dzhokhar Tsarnaev, accused of conspiring with his brother to bomb the Boston Marathon earlier this year.

My favorite "American citizen" is Najibullah Zazi, arrested in 2009 for plotting to bomb the New York subways. Zazi was born into a tribe in eastern Afghanistan and came to America in his teens. His ticket to entry was his father, whose ticket was, in turn, a brother living in Queens.

(We have no room for Scottish bankers because we have to make room for entire villages of illiterates from Afghanistan, thanks to Teddy Kennedy's 1965 Immigration Act.)

Zazi's own step-uncle described him as "a dumb kid, believe me," according to The New York Times. (Sorry, Scottish bankers -- that's our immigration law!)

He dropped out of high school and had an arranged marriage to his cousin in Pakistan. So Zazi is another big immigrant success story.

Forget the recent Muslim immigration problem. Virtually all enemies to America have been foreigners. The only known Italian traitors in U.S. history were anarchist terrorists Sacco and Vanzetti: immigrants.

Reading the amazing new book, Stalin's Secret Agents: The Subversion of Roosevelt's Governmentby M. Stanton Evans and Herb Romerstein, one can't help but notice that J. Edgar Hoover's job would have been a lot easier if our immigration service had been doing its job. A shockingly high percentage of the communist spies were immigrants. This is all the more striking considering that there weren't that many immigrants getting in at all back then.

Even the commies didn't want to overthrow the United States as such -- only to support Moscow. Otherwise, they'd have just kept voting Democrat and gotten there a little more slowly.

That's why the National Security Act of 1947, creating the CIA, expressly prohibited the agency from engaging in domestic operations. Now we have to spy on Americans because of all the imported Tsarnaevs and Zazis. We have created two huge problems where none existed before -- domestic terrorism and government spying -- all to help the Democrats win elections by changing the electorate.

Not only do our post-1965 immigration policies create an unemployment problem, not only have they massively increased the crime rate, but now all Americans are being asked to give up their civil liberties to fulfill Teddy Kennedy's dream of bringing the entire Third World to live right here in America. (And vote Democrat!)