Silver's Bravery Not an Act 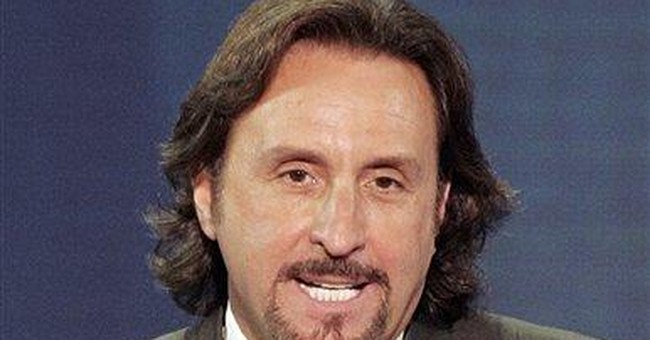 I wish I could ask Ron Silver what he thinks of the AIG bonuses. He'd have some original take -- maybe propose re-opening the bonuses paid to Franklin Raines and Jamie Gorelick for their yeoman's work running Fannie Mae into the ground and then collecting bonuses of $90 million and $24.7 million, respectively. Or maybe he'd just make a joke.

But I can't ask him anymore because Ron died of a rare esophageal cancer last Sunday.

So now there is one less person in the world who never chooses his positions to feed a pompous ego or to stroke his self-image as a thinking person. There was no point to posturing for Ron: His social standing in Hollywood was revoked the moment he supported Bush and the Iraq War.

Perhaps Ron always spoke his mind, but I didn't know him when he was "brave"; I only knew Ron when he was actually brave.

I've noticed that words like "brave" and "courageous" are mostly used nowadays to mean "left-wing." We're constantly asked to admire the monumental courage of Susan Sarandon, Tim Robbins, Sean Penn, Janeane Garofalo and the Dixie Chicks -- sometimes even by other people.

But for my younger readers, what courage traditionally meant was risking the disapprobation of people you know. It was about losing friends, losing work and losing status where you live -- not alienating people you will never meet. Insulting people in Kansas when you live in Los Angeles is not speaking truth to power; it's speaking anything to serve power.

One thing you cannot say about Ron's magnificent speech at the 2004 Republican National Convention is that he did it to go with the flow in Hollywood, to take the path of least resistance, to win easy applause. Ron did lose work, lose friends and lose his entire social apparatus.

Ron didn't say what he said to get any kind of reaction, but because he believed it. He was an intellectual trapped in an actor's body.

Amid the antiques at his beautifully appointed Park Avenue pre-war, there were piles and piles of magazines and newspaper articles on topics ranging from Sunni Muslims to Darwinism. Nearly every room was lined with books, most of them dog-eared.

When I needed to stay with Ron for a few weeks once, he'd get up hours before I did, read all the major newspapers and leave the interesting articles circled at the foot of my bed.

This might be the nicest thing a man could ever do for me. Hey, skip the bagel and fresh coffee -- bring me that op-ed page and a pair of scissors! It was like a fabulous Park Avenue hotel with a clipping service.

During his long-shot chemo treatments at "the spa," as he called Memorial Sloan-Kettering, Ron turned his chemo rooms into Command Central. Most people doze off during chemo; Ron would be sitting upright, watching the news, checking his laptop and making cell phone calls, seemingly oblivious to the poison being injected into his arm.

On Sundays when we had communion, Ron would pop the host in his mouth as soon as the tray passed him, approvingly observing that matzo was served at church.

No ideas frightened him, which is part of the reason why we were always laughing, even when we were arguing.

Ron sometimes told me of the cruelty directed at him by his former friends, but never with bitterness or for publication -- although I'm tempted to get it off my chest even if he didn't want to get it off his chest. You know who you are.

As with his impending death, Ron mostly joked about his banishment from the plutocracy. When I off-handedly mentioned in December 2004 that I had to get a Christmas tree, he told me he'd like to help, but having recently spoken at the Republican National Convention, the last thing he needed was to be seen walking through the streets of New York carrying a Christmas tree.

After an aborted operation on his cancer in July 2007, as soon as I saw Ron in his hospital bed, I told him I had Christians across the country praying for him. He said, "That's good, because the Jews are praying for me to die."

Here he was joking only hours after being told his cancer was inoperable and he had mere months to live. Nearly two years later, he was gone. Luckily for him, he now faces a Maker who rewards bravery, but despises "bravery."