Andrew Wilford
|
Posted: Aug 29, 2018 12:01 AM
Share   Tweet
The opinions expressed by columnists are their own and do not necessarily represent the views of Townhall.com. 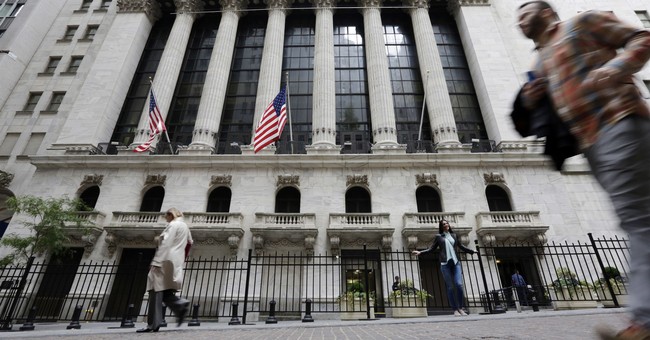 Last year’s tax cut legislation has been credited with enabling business-led stock buybacks, which some market skeptics are pouncing on to claim that the tax legislation has only benefited wealthy business owners. The idea that stock buybacks are holding back economic growth is built on faulty evidence; these buybacks are a sign that a healthy economy is functioning for both businesses and workers up and down the income ladder.

A report out of the progressive Roosevelt Institute alleging that stock buybacks stunt wage growth was seized on by The Atlantic’s Annie Lowrey, and reports that stock buybacks are set to eclipse $1 trillion this year have only amplified the hysteria.

The anti-buybacks argument appears to make a certain sense - at first glance. Instead of boosting worker pay or making productive investments, critics claim, companies are selfishly buying back their own shares. The Roosevelt Institute report claims that companies like McDonalds or Starbucks could boost every worker’s salary by thousands of dollars if they redirected the money away from stock buybacks and toward employee raises.

We can set aside the Roosevelt Institute’s unrealistic assumption that each Starbucks barista would receive the same $7,000 raise as top executives, because it’s a moot point. A total ban on stock buybacks would likely have a negligible impact on businesses’ salary expenditures, or even on investment spending. That’s because stock buybacks are misunderstood when they are categorized as a business expense; stock buybacks are really a form of profit. Businesses don’t engage in stock buybacks as an alternative to boosting worker pay or making productive investments — they do so after operating costs have been paid and the productive investments have been made.

It seems counterintuitive to think of spending as profit, but functionally that’s what buybacks are. For businesses, stock buybacks are similar to how an individual might put wage earnings in the bank — instead of keeping the cash on hand, they’re putting it away somewhere where it can easily be “withdrawn” (from investors) in the future, while at the same time rewarding shareholders. If businesses were not allowed to buy back their own stocks, they would store the profits somewhere else.

Critics of stock buybacks often claim that buybacks prove that businesses are overly short-term oriented. In her article, Lowery claims that “companies are working overtime to make their owners richer in the short term, more so than to improve their longer-term competitiveness or to invest in their workers.” Yet buybacks actually accomplish the opposite. In a recent paper, University of Chicago Professor Steven Kaplan called this argument “something of a non sequitur.” “It suggests that in a buyback or dividend, the money simply disappears rather than going to investors who spend it or use it to make other investments. It also suggests that companies that don’t need money should invest it anyway, rather than give it back to shareholders.” Besides, by engaging in stock buybacks, businesses are implicitly betting on themselves, assuming that their stocks can be sold for more in the future when they need the capital.

Buybacks also deliver concrete benefits to workers. Roughly the same percentage of Americans owned stock in some form (52 percent) or hold a personal retirement account (60 percent) as paid taxes in 2016 (56 percent). An analysis from the National Taxpayers Union Foundation estimated that post-tax reform increases in stock buyback and dividend payout levels would increase the annual yield of the median stock and mutual fund portfolio by $467, and increase the annual yield of the median personal retirement account by $723. With stock buybacks reaching even higher than expected, those estimates may even be conservative.

With the vast majority of Americans owning retirement or investment accounts - or both - stock buybacks are transactions that bring benefits to far more than just the wealthy. Buybacks allow successful businesses to reinvest in themselves and the market at large. If last year’s tax cuts have enabled these buybacks, it’s yet more evidence that the legislation is working to benefit all Americans.